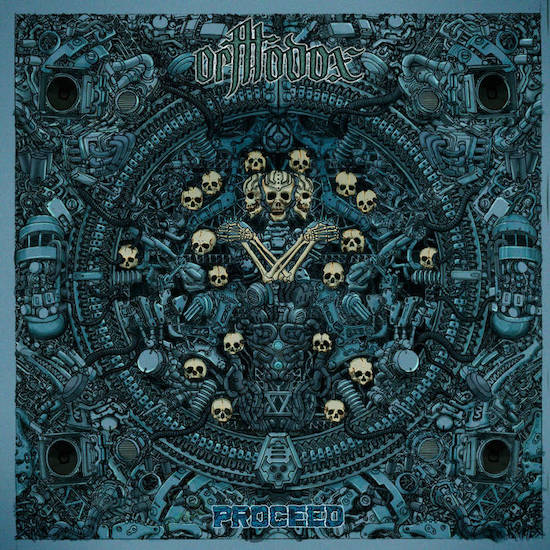 The new Orthodox album represents both a return to an earlier essence and also a step forward, with the former (perhaps paradoxically) making the latter possible.

Proceed (which is due for release tomorrow by Alone Records) is this Spanish band’s eighth album in an extensive discography that began with the 2006 debut, Gran Poder. In these last 16+ years they have let very few years go by without releasing something new, short or long, and have seen their star rise, to the point of playing festivals such as Hellfest, Roadburn, Supersonic, Amplifest, and Primavera Sound, opening for the likes of Voïvod, High On Fire, and Corrosion Of Conformity, and collaborating with artists as diverse as Julian Cope and flamenco dancer Israel Galván.

Along the way, however, the original trio became a duo after the departure of guitarist Ricardo Jiménez following the 2011 album Baal, which left bassist/vocalist Marco Serrato and drummer Borja Díaz to handle all recording and live performances since 2014. But Proceed represents Ricardo’s reunion with those two, and in that way, and others, it is a revisiting of the past — but still a formidable movement forward into uncharted waters, as you’ll understand when you hear our premiere stream of the album as a whole. 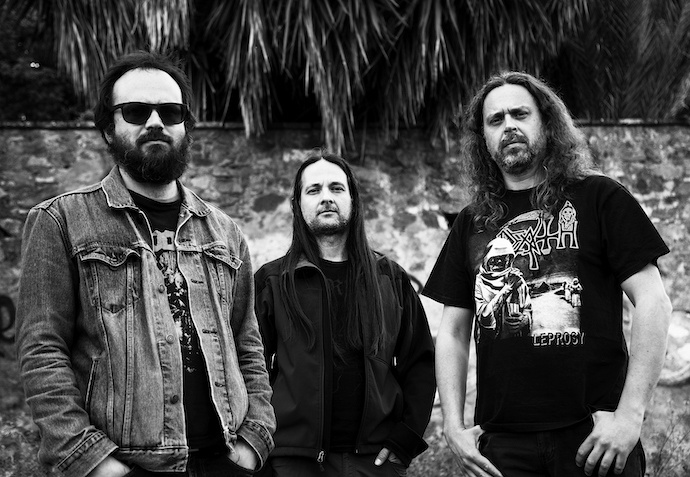 It’s irresistible to riff on the band’s name when discussing Proceed, even if others have undoubtedly done it before. There’s an irony in their name, when the music is so unyielding to convention. Proceed unfolds across six tracks and more than 40 minutes, building from the opener “Past Seers” to mammoth closer “The Long Defeat”, and the trip is far from “orthodox”. It is instead an unpredictable and frequently frightening adventure. Marco Seratto explains part of how that came to be:

This has been the most important album for us since Gran Poder, and without a doubt the most difficult to make. If we went back to the trio line-up, we had to prove to ourselves that we could do the best we had ever done. For this, we had two things very clear; first, that Ricardo contributed his ideas to the maximum. After more than four years out of the band, we understood that he should return to enjoy and develop ideas within the Orthodox framework. That’s why Proceed is the ORTHODOX album with more guitar prominence. We think he has done a great job.

The second point that we were clear about was that if we wanted to take a step forward, we had to have a producer. We’ve never had a proper producer on our records before. But we were very clear that this producer should be Billy Anderson, for which we have had the invaluable help of Alone Records. We did our best and we hope that our old and new fans feel the same way. 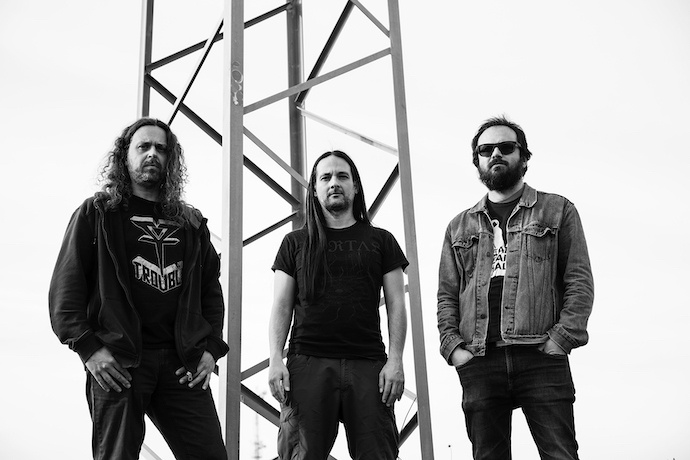 True to those comments, Orthodox deploy a big arsenal of riffs as they Proceed. Some of them — the ones that are most propulsive and convulsive — have the girth of redwoods, thick and heavy and as rough to the touch as old bark. The heft of the chords is no less crushing when they go slow, dragging listeners by their outstretched arms into troughs of near-lightless gloom. Even when they drag, the drums keep the pulse elevated, rumbling and tumbling, pounding like mallets and cracking like whips.

But there are other fretted weapons in the arsenal — brittle notes that eerily crackle from unearthly planes, freakishly swirling arpeggios that radiate the disintegration of sanity, screaming note-bursts, waves of boiling dissonance, chime-like ringing, gravel-chewing and bubbling bass solos, and in  “The Son, the Sword, the Bread” (the most psychedelic and bizarre of all the tracks), something that sounds like a big rust-plagued chopper trying to rumble to life, a growling mechanized beast that never quite finds its gear.

The skull-slugging drum rhythms also prove to be unorthodox, sometimes stopping, starting and jerking in ways that keep us off-balance instead of nodding along to their convulsive booming beats (as will happen often). The rhythms are persistently inventive, a big part of the adventure.

Towering obsidian monoliths rise up in the sound and fracture as the earth heaves; drug-induced seizures overwhelm the senses; seas of despair froth and crash against jagged rocks of heedless cruelty; inmates gibber in their asylums; monstrosities breathe down our necks; and spectres scream from the heavens. And in the closing track, the music becomes slow, jazzy, and seductive before it draws the album to a close (one last surprise)

Marco Serrato‘s vocals are equally frightening, wailing and screaming in gritty, throat-lacerating tones, and sometimes singing like a prophet who sees what we can’t, often fighting to pierce through the spine-tingling glories of instrumental devastation.

This isn’t the kind of doom metal you zone-out to. It does become hypnotic, but not because it drones and narcotizes. The spell instead comes from being gripped by a bone-smashing and  head-spinning experience that doesn’t forecast where it’s going — because it’s un-orthodox.


MORE DETAILS: The afore-mentioned Billy Anderson (Sleep, Melvins, High On Fire, Om, Neurosis, EyeHateGod) was flown to La Mina Studios in Sevilla, Spain, and recorded the album with assistant engineers Raúl Pérez and Nacho García. Anderson also mixed the record at his Everything Hz back in Portland, Oregon, after which it was sent to Justin Weiss at Trakworx in San Francisco for mastering. Proceed was completed with fascinating artwork and illustrations by Fernando Rivas and layout/design by José Postigo.

Alone Records will release Proceed on LP in two variants limited to 500 copies as well as digipak CD and digital formats this Thursday, June 30th. Find preorders at the label webshop and Bandcamp via the links below. And don’t miss the psychedelic video for “Rabid God”, the second of the advance tracks released from the album in the run-up to its release.

3 Responses to “AN NCS ALBUM PREMIERE (AND A REVIEW): ORTHODOX — “PROCEED””