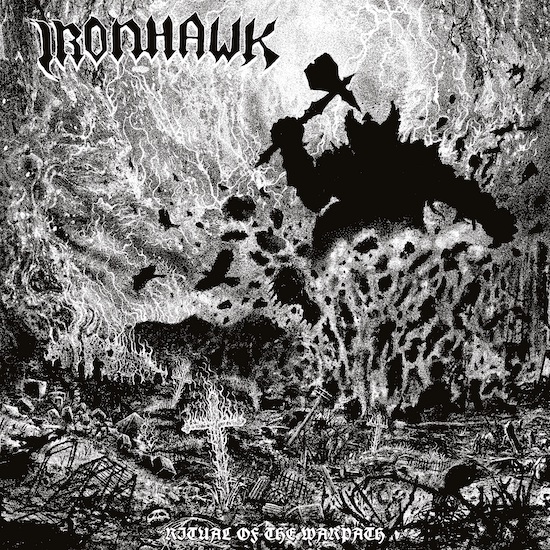 It’s time to raise hell and horns, to get hearts hammering, heads pumping, and voices snarling. To do that, we’re bringing you a full stream of the fierce and feral debut album by the Tasmanian devils who call themselves Ironhawk. Fittingly named Ritual of the War Path, and fittingly emblazoned with battle-ax imagery, it’s set for imminent release on June 30th by Dying Victims Productions.

By way of quick introduction to the particular kind of punk/metal rampaging embraced by this trio (who made their start covering Motörhead songs), we’ll first share an excerpt from the PR material: “We hear the cavernous crunge of early Bathory, the sooty surge of early Sacrilege, the burning spirits of prime English Dogs, and definitely (and uniquely for this style) the epic landscapes of mid ‘80s Amebix across the album’s surprisingly dynamic 37 minutes”.

So that’s one kind of preview, but of course we have our own…. 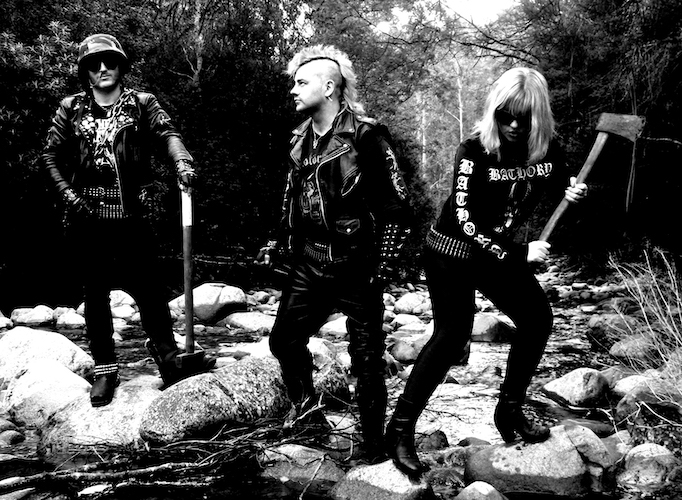 Ironhawk waste no time mounting their blade-wielding assault, charging from the hell-gate with “The Final Crusade”, a rushing riot of skull-clubbing drums, tumultuous bass, blaring chords, and the revrb-ed belligerence of serrated-edge howls. The music blazes in ever-higher flames, and the guitars roil in boiling madness, but the band also put jackhammers to your guts while the drums veer from feral punk beats to piston-driven propulsion.

From there, Ironhawk keep the energy in the red zone, almost wholly devoted to riot and ruination. But although the sound is gritty and “loose”, and the momentum usually hell-for-leather, there’s an unmistakably brazen defiance in the music, a kind of take-no-prisoners imperiousness and barbaric grandiosity. The tracks are the kind that get fists and heads pumping relentlessly as the guitars whine, scream, and slash.

But as you’ll figure out, Ironhawk do switch up the tempos, and they pick their moments within the blood-boiling, skull-rattling mayhem to kick in primal riff-grooves that get muscles twitching without volition.

They change moods too, some of the songs more grim and bleak, some more cruel and remorseless, and some more free-wheeling and crazed than others. What doesn’t change is the fiendishly infectious nature of the riffs and the absolutely scalding, teeth-bared ferocity of the vocals.