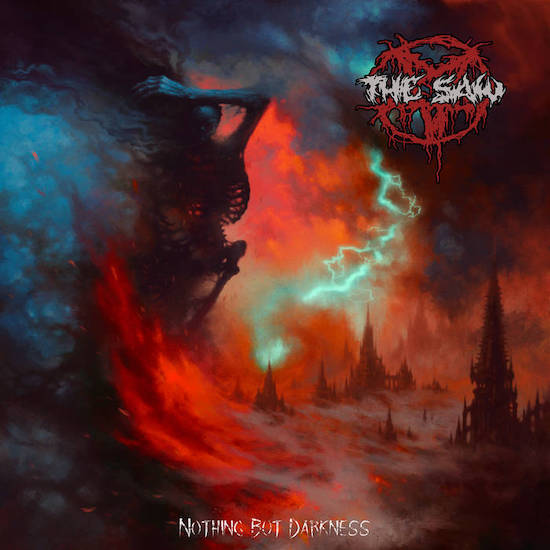 You have to admit (I insist!) that The Saw is a great name for a death metal band. In the lore of horror and the reveling in destruction that inspires so much of the genre, it’s not a tool of carpentry but a weapon of ruination. The teeth don’t cut wood and scatter sawdust but bite through flesh and bone. It’s a wonder that Metal-Archives shows the name as unclaimed… until now.

Who has now claimed it? The answer is a quintet of talented Russians, who first began gathering as a side project of vocalist and lyricist Evgeny Pchelyakov (from the band Анклав Снов) and guitarist and composer Roman Derevyanko (Стальные Нервы) and then expanded through the addition of guitarist Max Nikolaevsky, bassist Dmitry Bichenkov and drummer Yuri Puzanov.

What they’ve achieved together is captured in a debut album named Nothing But Darkness that’s set for release on July 30th by the Ukraine-based label GrimmDistribution, and to help pave the way we’ve got the premiere of the album’s title track today.

The grisly brutality suggested by the group’s name is definitely a feature of this new song, but certainly not the only attraction. The music spawns visions of a lurching monster with a fever kindling its blood. The chain-sawing riffs are heavy and corrosive, the leads maniacally flickering and queasily oozing, the drums skull-snapping, the vocals a livid lycanthropic howl.

The song viciously grinds and thuggishly slugs as the drums batter and tumble. The vivid pulse of madness also animates the music, and a soloing spectacle gives it an aspect of sorcery. It triggers fast-twitch muscle reflexes and brings evil smiles, and it’s quickly addictive as well.

Not for naught does the label recommend Nothing But Darkness for fans of such legends as Obituary, Jungle Rot, and Bolt Thrower. The album gets the eye-catching supernatural artwork it deserves, thanks to the talents of Alexander Chernenko, and Roman Derevyanko gets credit for mixing and mastering it.

Lest you think today’s song premiere is some kind of outlier, we’ve also included a stream of the first single from the record, “The Temple of the Saw“. It’s a ghoulish and misery-steeped experience that will also give your neck a vigorous workout, and those dismal melodies get stuck in the head too. It’s also a further demonstration of just how spine-tingling Evgeny Pchelyakov‘s vocals are.

The album is up for pre-order now. Don’t sleep on this one!