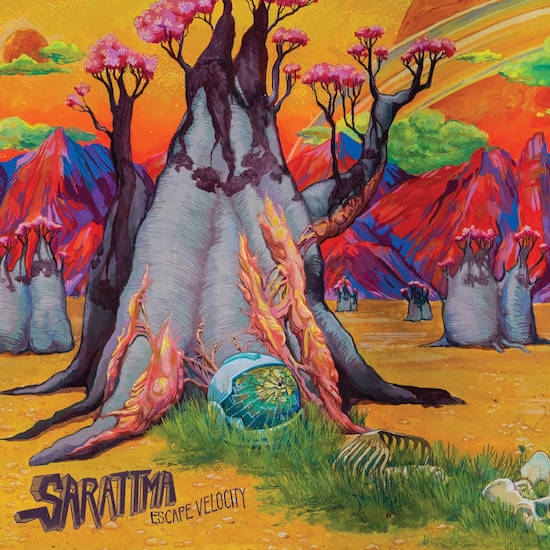 (Todd Manning has turned in this extravagant review of an extravagant album by Philadelphia’s Sarattma, which will be out on August 12th.)

It may take years for us to know all the things we missed during the early days of Covid. Apparently, Philadelphia-based duo Sarattma recorded their debut album Escape Velocity in 2019 but it’s just now about to drop, courtesy of Nefarious Industries.

The duo consists of guitarist Matt Hollenberg, best known for his work in various John Zorn projects, along with Cleric and John Frum as well, joined here by Sara Neidorf, who did a stint with Brian Jonestown Massacre and played with doom metal band Aptera and doom-jazz duo Mellowdeath. Both those outfits are vastly underrated and deserve investigation. Sarattma, though, finds Hollenberg and Neidorf at the pinnacle of their instrumental abilities. 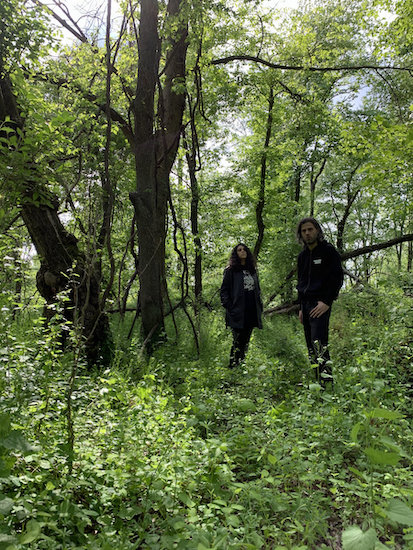 Starting off with the title track, Sarattma are as unpredictable as they are impressive. Escape Velocity begins with a Voivod-ish riff yet it also possesses a doom metal swagger. The riff has a steady pulse but it’s in an odd time-signature, the music seeming to expand and contract beneath them. As the song progresses, they continue to dance through several off-kilter sludge riffs, but things take off with Hollenberg’s guitar solo.

The solo is astounding. Hollenberg manages to invoke Trey Azagthoth, Fredrick Thordendal, and Allan Holdsworth in equal measure. Phrases fly by, and as technically impressive as they are, they are more exciting for the atmosphere they create. Sarattma evoke a unique mood that transcends their technical prowess.

From here, the duo continue to add to their sonic palate. “Theraphosidae” and “Sublingual Excavation” begin with noir-ish jazz excursions somewhat reminiscent of Neidorf’s Mellowdeath project. The latter tune brings to mind the intricate clean- tone work of David Tiso in Ephel Duath.

The variety keeps coming as the album progresses. “To Touch the Dust” often comes across as a mix of power ballad and prog-rock exercise. When the heavy sections arrive they land like Dillinger Escape Plan sans vocals. “Sciatic Haze” draws a through line from Melvins to djent and also reminds us that Neidorf’s chops are every bit the equal of Hollenberg’s.

The album closes with the epic “Twilight Realm of Imaginary No” which clocks in at fifteen-plus minutes. The pair manage to concoct a composition that touches on Pink Floyd, Voivod, modern Jazz, and indie rock all at once. The mood is mellow, but close attention to both performers is overflowing with awe-inspiring moments. Hollenberg oscillates between David Gilmore’s best moments in Floyd and experimental jazz tones a la David Torn and the aforementioned Allan Holdsworth. Neidorf controls the timing underneath as if she holds an hourglass in her hands; her endless variations are mesmerizing. The end of the piece takes a more metallic turn but nevertheless consists of the same material, ultimately displaying their complete control of the music.

Escape Velocity is a powerful statement from two top-notch musicians. The record somehow displays intense virtuosity while retaining a vision that elevates it beyond pure showmanship. These two deserve more attention, whether through more Sarattma, more Mellowdeath, more of any project they decide to participate in. I would love to hear what they would do in the context of a full band. But make no mistake, I would also love more of what Sarattma would do as well; the possibilities are endless.

One Response to “SARATTMA: “ESCAPE VELOCITY””