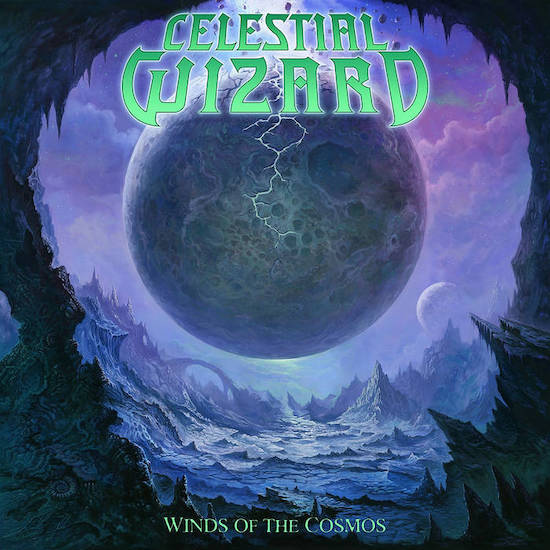 Of all the genres of heavy metal our site covers, power metal is the one least-noticed by far. One glance at our site’s name suggests a reason, though that’s not the only one. However, we’re about to prove that there’s a way to present power metal that even attracts scoffing extremists such as ourselves, and we have Denver, Colorado’s Celestial Wizard to thank for that.

Should you happen to be familiar with this band’s 2018 debut album A Sinister Awakening, it must be said up-front that their second one, Winds of the Cosmos (just released on July 15th), reveals significant changes in their sound (plus the addition of drummer Tim Gillman to the line-up). Where the debut featured healthy doses of strings, choirs, and symphonic synthesizers to accompany their fantasy-inspired narratives, the new one places a big emphasis on hard-charging riffs — and extremely tasty ones at that — albeit without wholly abandoning their previous ingredients.

The band have continued to deploy death metal vocals (and other ingredients of melodic death metal), as well as the kind of singing familiar to power metal addicts, and that juxtaposition is certainly a big reason why this band’s hybrid sound has become appealing in dark corners such as ours. But those tasty riffs have a lot to do with the appeal as well, and the song “Revenant” is a fierce example of that. No wonder, then, that we happily agreed to premiere a guitar-playthrough video for that song today. 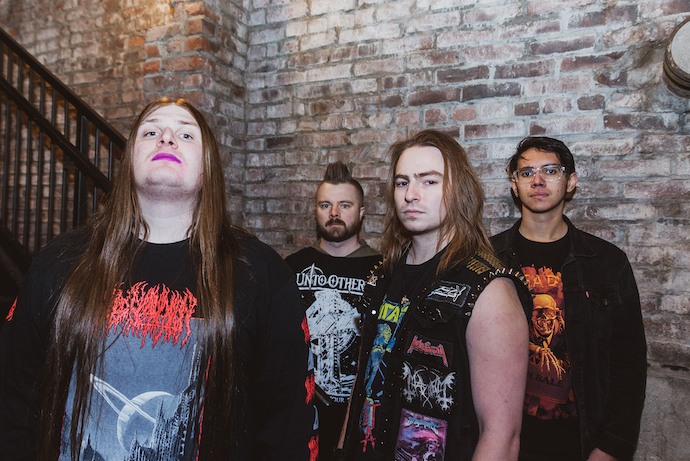 It takes just seconds for this pair of guitarists (Nick Daggers and Guillermo Jurado) to get hearts racing with an electrifying, hard-charging riff that skitters and blares, backed by neck-snapping drumwork. In the early phases of the song, Daggers‘ vocals carry the heroic melody, hitting the high notes with aplomb, but with enough grit in his tones to give those soaring vocals a serrated edge. Equally impressive, the vocals also turn on a dime, allowing frontman Amethyst Noir to vent vicious teeth-bared growls.

Tumbling drums and the reverberation of grim slashing chords create a bridge to scorching screams and a tandem of guitar solos that are mystical and glorious, which in turn become the prelude to another savage war charge, a further climb toward heroic summits, and one final pulse-pounding spectacle of sound. Watching the guitarists do their thing in this video makes the experience even more exhilarating.

“Revenant” is the first full song on Winds of the Cosmos, and a smart choice for a guitar playthrough. The song’s lyrics revolve around “immortality and the loneliness and anger that comes with living forever”, and it also reveals a greater emphasis on singing, which is one of the new album’s hallmarks.

As a whole, the album’s lyrics again draw upon fantasy traditions, but with sci-fi themes in the mix as well, and thus it touches on topics such as space travel and black holes as well as Dungeons & Dragons.

Speaking of which, we’re also providing the band’s previously released video for “Ice Realm“, a song in which the harsh vocals are more prevalent than in the track that’s the subject of today’s video premiere. And we’ve provided a stream of the entire album too — which comes recommended for fans of Dark Tranquillity, Firewind, Amon Amarth, Arch Enemy, and Galaktikon.