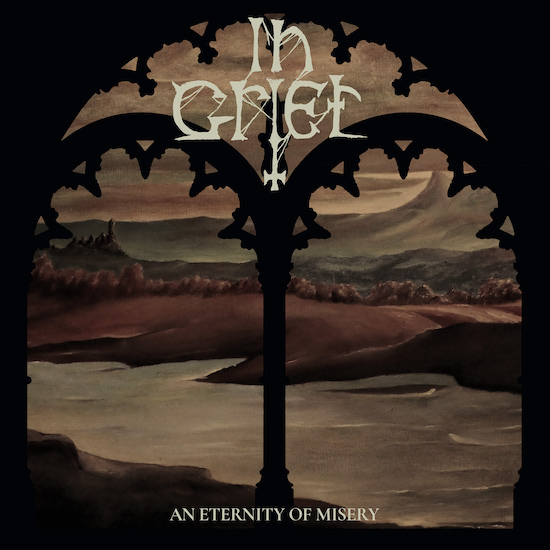 Comparative references are useful but risky techniques in writing about new music — useful because they function as short-hand summing-up’s for experienced listeners, risky because they so often go awry, or remind you of how great the referenced bands are, and by comparison how far short the newcomer falls.

Those reflections occurred to us when seeing the press materials for An Eternity of Misery, the debut album by an Italian band named In Grief that’s headed our way in September from Iron Bonehead Productions. Those materials included this passage, which might naturally provoke skepticism among some readers:

“Like much/most melodically inclined doom-death, the spectre of “the Peaceville Three” – My Dying Bride, Paradise Lost, and Anathema – looms large here, but one can equally detect trace elements of the earliest works of Katatonia, The Gathering, and especially Tiamat‘s pivotal Clouds.”

That such words were offered in support of a band who only formed during the plague year of 2020, with only an EP and a demo to their name in advance of this album, is even more likely to inspire doubts. But it turns out those reference points are quite useful, and that In Grief‘s music indeed lives up to the billing.

Take, for example, the first advance track released from the album, “Close to Insanity“. The riffs are immediately dour, the vocals wrenching in their jagged, mind-scarring torment, and the rhythmic punch of the song formidable. Agony rises, frenzy ensues, but the song is also beautiful in its poignant rendition of sorrow.

The guitars wail and beguile, a swirling solo creates its own haunting but seductive spell, clean voices soar in solemn reverence, and the surrounding music also scales towering heights. Yet, the band also return to episodes of disturbing confusion and hammering pain, and the wrenching torment of the harsh vocals is downright scary.

And thus it’s no exaggeration to say that In Grief‘s music is a formidable and in many ways classic rendering of doom/death, both emotionally powerful and penetrating, electrifying and elegant, crushing in manifold ways, and capable of staying with you.

The song also proves to be equally dynamic, using booming and militaristic drumwork and scathing riffage, along with those terrifying vocals, to torque the tension to the breaking point, but also dragging the soul into a cold, oppressive place where only grief dwells, and using an extended clean-guitar instrumental to bring out perhaps-hopeful musings in completely soulful and tender yet riveting fashion.

Well, yes, In Grief may be a new band, but they already demonstrate impressive mastery in their chosen genre-form. Perhaps that’s less surprising when you learn that the three members have amassed a wealth of experience in other groups over the last two decades, including the likes of Profanal and Necro.

Iron Bonehead will release An Eternity of Misery on September 2nd, in CD and vinyl LP formats. On that day they’ll be available for purchase via the links below.

One Response to “AN NCS PREMIERE: IN GRIEF — “DIG HOPES””