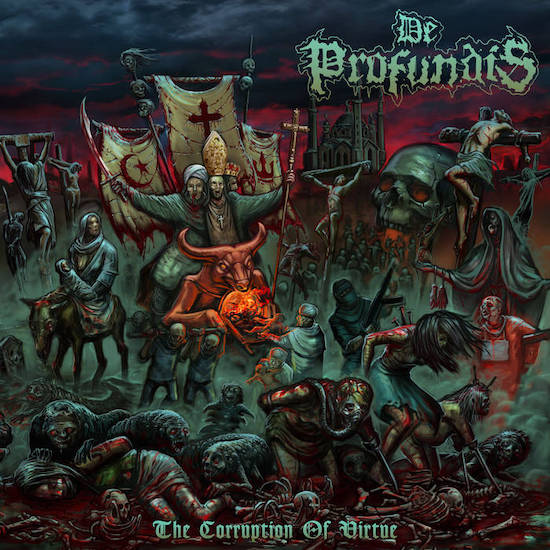 On the distant horizon we’re glimpsing the ominous approach of another full-length record by De Profundis , their sixth album since this UK band first coalesced roughly 17 years ago. In that span of time  line-ups have changed, and so have the group’s interweaving strands of metallic extremity. The changes have made each album an experience of discovery, undermining anyone’s effort to claim, “It’s De Profundis, you know what you’re going to get”.

The band’s latest creative endeavors are captured in a new album named The Corruption of Virtue, and it’s pegged for release on October 7th by Transcending Obscurity Records. So far, fans have received two excerpts from the album — a video for the song “Religious Cancer” and a stream of “Desecrating Innocence” — and today we’re bringing you a third one, in a track that invites us to “Embrace Dystopia“. 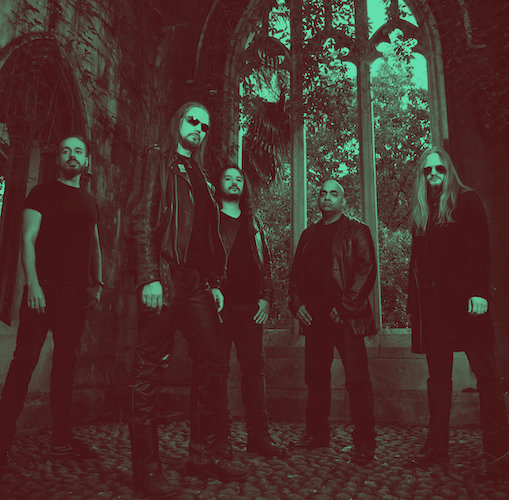 Transcending Obscurity observes that “Most bands mellow with age, but nearly two decades since their inception, UK’s death metal stalwarts De Profundis have only evolved to become more and more extreme with each album, their latest probably being their most intense, aggressive and challenging release ’til date”.

It’s hard to argue with that after hearing those first two previously released tracks from the new album, and “Embrace Dystopia” solidifies the conviction.

“Religious” Cancer” is a racing rampage with a super-heated pulse, as wild as it is bludgeoning, but with beguiling guitar melodies and soloing spectacles fluidly worked into the fury of fast-twitch fretwork, jet-fueled drumming, and voracious, barking growls. If it doesn’t get your own heart racing, seek immediate medical attention!

“Desecrating Innocence” is no less savage and no less electrifying. It also charges at rocket speed, enlivened by exultant flurries of darting riffage, but also segues into episodes of grimness and melancholy, and again magnificently enriches the whole experience with a rich array of head-spinning guitar solos, blistering and neck-cracking drumwork, and truly spine-tingling vocal ferocity.

Is there any chance that today’s new song will see De Profundis easing back on the throttle and giving your brain a chance to stop spinning? You might think so, based on the grandeur of the opening chords and the mesmerizing swirl of the first instrumental arpeggios. But the drums do kick things into hammering gear, and the riffage viciously seethes, albeit with an air of despair.

“Embrace Dystoia” is no doubt a viscerally jolting song, and one that includes its own dynamic array of technically impressive shredding and skull-cracking percussion, and the bass really gets a chance to shine as well, but there’s also something about the song that’s more shaded in darkness than the first two advance tracks. All three of the first-revealed songs display a fine command of emotionally evocative melodies, but this one brings the heart down into grief as well as punching it into life. (Perhaps needless to say, the vocals are again magnificently savage.)

In a nutshell, Transcending Obscurity has brought out some formidable death metal over the years, but The Corruption of Virtue is such a great mix of hell-fire ferocity, top-shelf technical skill, and enthralling melody that it stands in the highest echelon.

The album’s eye-catching artwork, which blends well with the album’s lyrical themes, was created by Alex Tartsus (Depravity, Sepulchral Curse). The label recommends it for fans of: Death, (early) At The Gates, Carcass, Martyr, Opeth, Sepulchral Curse, Live Burial, and Cerebrum.

As usual for a T.O. release, you have your choice among a wide variety of formats for the album, and abundant apparel as well. See for yourselves via the links below.