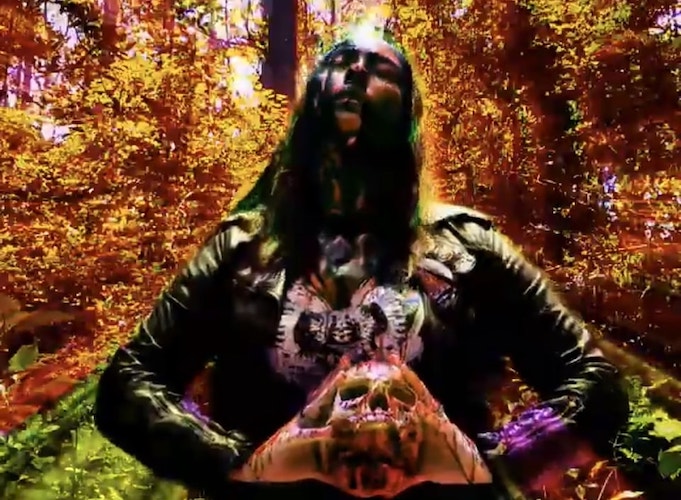 In June of this year we premiered and reviewed a remarkable split release by Florida-based Grave Gnosis and California-based Hvile I Kaos. In part, the split functioned as a teaser for new albums that are in progress from each band, but it was much more than that. It also represented a singular conceptual collaboration, “expressing the nature of parallel spiritual forces, focusing on aspects of the Sun and its Shadow, as seen through the lens of Vedantic Nihilism”.

That term Vedantic Nihilism originated in the writings of Grave Gnosis founding member and Occult author Caine Del Sol, in his book Codex Aversum. It represents a magickal system (briefly described here) that describes a path to “complete immersion in the Void, in purest surrender of our illusion of Self”, as a means of achieving “unity with the beyond”.

With respect to the new split, “Each track represents and invokes a facet of the forces of Moloch as they may be interpreted in both the microcosmic front of the personal psychospiritual, and the macrocosmic sociopolitical and religious egregores. The magickal formulas draw from the alternating modes of invocation and evocation, typified by incitement to fervor and call to action, respectively”. 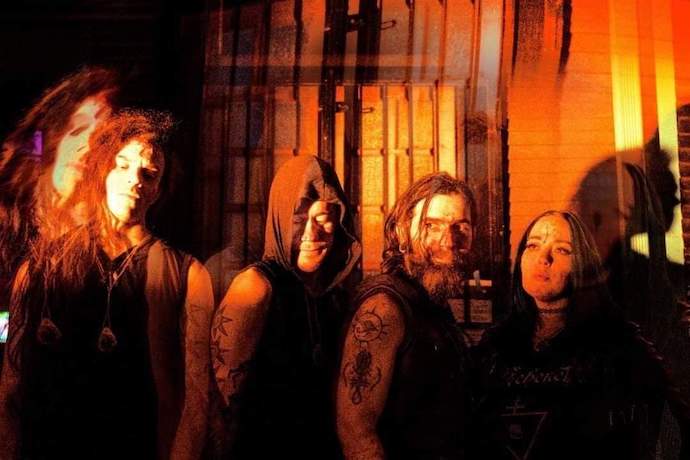 The two tracks on the split by Grave Gnosis are “Carnivorous Darkness” and “Vultures“. A bit later in this article, we’ll repeat what we previously wrote about the first of those, but the main subject of today’s feature is the video that Grave Gnosis made for the second song, “Vultures“. It represents, as Grave Gnosis explains, “A hallucinatory journey through the Apocalyptic Sun in Nigredo, exemplifying the violent psychedelia and dark spirituality integral to the band’s message and identity”.

As we wrote before, the song charges like a feral beast, guitars slashing and writhing, drums hammering, and the vocals exploding in unchained intensity. It’s an unnerving experience, one whose psychoactive properties are dismal and laden with dread, but also an expression of riotous, terrorizing ecstasy. This beast gallops and gnashes but also weaves hallucinatory spells that spawn visions of hideous splendor, aided by the cello contributions of Kakophonix (from Hvile I Kaos) and the paranormal keyboard performances of S.

“Vultures” is also dense and complex, constantly changing as it blisters and dazzles, bludgeons and intoxicates. It becomes vast and threatening, a vision of peril and fear, yet sounds fierce and indomitable. It’s an experience that may leave you breathless, no matter how many times you hear it.

The video is itself a wild kaleidoscope of imagery that well-suits the wild and hallucinatory qualities of the music. In fact, it’s hard to imagine imagery that would more perfectly suit the song. And the amount of effort that went into the creation of such a transportive experience is evident. The band explain:

Our Coven has put a great amount of time and effort into this, filming all hours of the day and night in sweltering summer heat, covered in rotting blood, deep in the wooded swamps of the Southeastern US.

The goal was to portray not just the song, but the concept of Grave Gnosis as a musical and spiritual collective in the most authentic way possible. The video is filled with 100% real blood, bones, fire, rot, insects, altars, sigils, and rituals. The visuals and direction are frantic, venomous, and based in real entheogenic and trance-induced experiences with Sinister Divinities.

Let this be a testament to our Doctrine and Will, in continued growth of devotion and virulent potency.

Join us in Transcendent Reverence of Death.

And to that we’ll add this: Prepare for the black alchemy of blood, fire, and death:

And now to return to what we previously wrote about the other Grave Gnosis song on the split, because it should not be missed either.

“Carnivorous Darkness“, is true to its name. The music hits like a typhoon of pitch-black savagery, a whipping and whirling vortex of dense, violent riffage, spectral synths, horrifying vocal proclamations, and thunderous percussion. Searing and spearing tones erupt from the storm like otherworldly fires, or like sirens from another plane. There’s a feeling of frightening magnificence in these combined sensations, and against all expectations those strange but fire-bright melodic expressions in the midst of tumult become mesmerizing.

But the journey of this one song is a changing one, and as stunningly ferocious as the track is, it’s also elaborate, and the intricacy of its twists and turns is evident despite the dense and wholly engulfing power of the sound. The music brutally stomps and it also convulses in seizures of battering drums, blazing chords, and screaming and growling vocals that seem authentic proof of possession. Thanks again to the cello contributions of Kakophonix and the keyboard magic of S. (whose Melotron pedals help fuel the music’s psychedelic strangeness), it also spirals away into nightmarish ethereality.

Red Nebula has released the split in cassette tape and digital formats, and both versions are also available from the band.

Grave Gnosis are currently booking festival appearances, and are also looking for labels for their upcoming full-length — which will be named Pestilence Crowned — and that’s an album we eagerly anticipate.