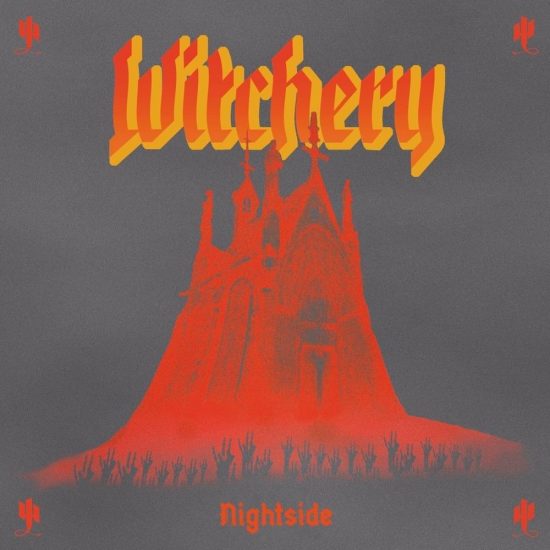 (Here’s DGR‘s review of the latest album by one of our site’s favorite bands, Sweden’s Witchery. It was released on July 22nd by Century Media.)

Witchery albums have a habit of sneaking up on us around here, which is strange given that they do have a collective among the staff that will go to bat for them to this day.

Granted, in the span of time since the site’s founding up until now there’ve only been three Witchery albums released, but they’ve existed as a steady undercurrent for the writers around here and have evolved in the background into a ‘house band’.

July 22nd gave us the fourth addition to the collective of Witchery albums that have been released since this site’s founding, with the recent unleashing of Nightside, closing up a near five-year gap between albums. 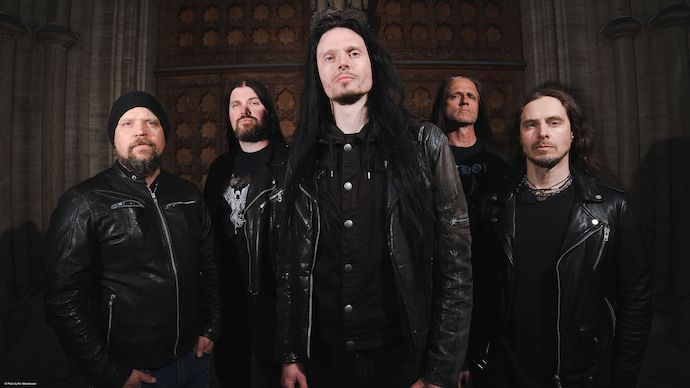 Five years is a little bit on the long side for certain bands, but Witchery have had some gaps in their career before, including multiple  ones of about the same length earlier on.

One can only imagine that the feeling was probably intensified too by the fact that prior to Nightside, Witchery had released a year-over-year album collective in 2016’s In His Infernal Majesty’s Service and 2017’s I Am Legion.

Both of those ranked pretty well with us but now that puts Nightside in the interesting position of having a near five-year rest for the band. Does this one also join the much-vaunted ranks of being a constant undercurrent at the site here?

It will come as no surprise to hear that Witchery still sound very much like Witchery on Nightside. The group have a solid-as-a-rock formula and have long settled into being a band whose legacy is a hallmark of consistency.

They have the blackened/thrash/death metal hybrid honed down to a fine point and they’re damned good at it. When Witchery does Witchery, you’ll know you’re in for a ‘good’ time at the very least.

They don’t even shift far in terms of subject matter either, because if nothing else Witchery are going to write about smashing the church into Satan – which they’re experts at by this point. Witchery write about Satan with a strong frequency and they write about Satan better than most bands do.

They write about the subject better than bands that have their heads shoved so far up their asses in pursuit of occult magicks and other scary-sounding subject matter that they could tell you what the back of their teeth looks like.

The part that has made Witchery a joy to listen to over the years is that they take a joy in it as well, so when you hit a song like “Popecrusher” you too are likely to nod along, like “yes, yes, very evil” and then get back to the headbanging since the song – likely why they chose it as one of the singles – is a murderous highlight on the album.

Which brings us to the idea of Witchery doing Witchery wherein you’ll never go broke playing to the cheap seats. The band can be as adventurous as they like and it does help break albums and give the band breathing room, but when they play to their strengths with a song like “Gilded Fang” from In His Infernal Majesty’s Service – which may be one of the most following-the-Witchery-blueprint songs out there – the band truly are one of the best at this style.

Nightside is an odd duck on that front because for the first few songs of the album, the fire and inferno you’d expect from the band is a little more slow-rolling than when they’re knives out and ready to kill. Opener “Witchburner” is great for setting the scene of Nightside and also welcoming listeners in, giving a taste of that style, but “Don’t Burn The Witch” and “Storm Of The Unborn” that follow are more mid-tempo affairs.

The opening bits of Nightside take on a strange pace due to this: You have a quick hit to the system, two sort of mid-tempo headbangers with vocalist Angus Norder pulling off some impressive snarls with the hefty number of lyrics he delivers in those two, and then oddly enough a mood-setting instrumental piece before you hit the previously mentioned “Popecrusher”.

This happens a few times on Nightside as well, because it isn’t two songs later that you have another quieter instrumental piece before a one-word song title with “Under The Altar” leading into “Churchburner”.

A song like “Churchburner”, however, is the type of song that makes Nightside worth the price of admission. Witchery have tried to do albums like this before, wherein every song is just a constant stabbing of the eye-sockets, and those have run a little long in the tooth, but it seems like now Witchery albums are experiments to see just how many of the fiery, high-speed affairs they can fit into one disc to break up some of the pacing.

Nightside plays it pretty conservatively on that front, so if you’re the type to like the shorter, grindier songwriting style where Witchery are a ceaseless circle-pit, you’ll likely find yourself bouncing around the disc with your constant tops being the opener, “Popecrusher”, “Churchburner”, and “A Forest Of Burning Coffins” near the very end (which features Jeff Walker as guest vocalist).

Special mention does need to be made of “A Forest Of Burning Coffins” though, because to this day it is still not often you find one of the best songs on an album laying near the end of a release. Groups will let albums taper off all the time but it seems like Witchery wanted to make it so that the titular “Nightside” closer had nothing but charred ground in front of it.

You’ll note I mentioned “Gilded Fang” as a song that sticks rigidly to the Witchery blueprint yet still comes out as one of their best, and “A Forest Of Burning Coffins” does the same damned thing.

Nightside represents the eighth release from Witchery, so it probably doesn’t shock that the band settled on sounding just like themselves. There are moments throughout this release where they’re unable to be challenged. You headbang hard and fast, and yes, you’ll find yourself with more energy in you than before.

But it’s also recognizable that Witchery have gotten to where they are by being really good at that for a long time now, and the gap between Nightside and I Am Legion hasn’t changed that any. It’s a solid addition to the band’s overall discography that provides just as many infernal high-speed headbangers as it does the slow-broilers.

It may be paced a little strangely in its front half, giving Nightside the sense that it isn’t sure where exactly to plant its feet at first, but when Witchery settle into their groove for the latter-half battering of the album, Nightside earns its keep.

One Response to “WITCHERY: “NIGHTSIDE””