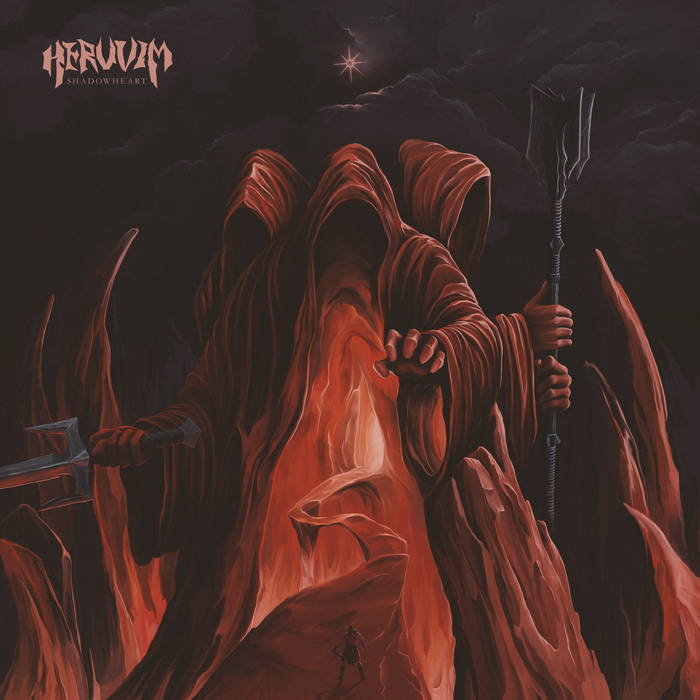 Regular visitors to our site are aware that roughly once a week we compile round-ups of new songs and videos that have seized our attention. The round-up you’re staring at now, however, is different from the usual ones.

In this instance we’re putting the spotlight on four recent or forthcoming releases from a single label — Redefining Darkness Records. And there’s another difference, because in some instances what you’ll be discovering are premiere streams of the music.

The first release we’re spotlighting has goals that go beyond giving you something (very good) to listen too. It’s the debut EP by a death metal band from Odesa, Ukraine, named Heruvim, and all proceeds from digital sales are dedicated to the support of the Ukrainian army in their fight against the Russian aggressors.

Relatedly, the band’s mainman Valera works with a team of video journalists who call themselves Fryed Pin Family, and they’ve been creating a series of mini-documentaries in collaboration with the UMBS (Ukraine Must be Safe) Volunteer Organization. We’re including the first in a three-part series of films below. This one relates the stories of Kharkiv residents who did not leave the war zone but instead have been living in the frontline zone for four months:

The Shadowheart EP was previously released by the band in April of this year, and it captivated Redefining Darkness, not only because of the music but also because of the horrible circumstances that have afflicted the band’s homeland and their dedication to helping. And thus the label will be releasing the EP on CD on August 5th, and using its platform to help spread the digital release as well.

There are, of course, many ways to support Ukraine in its resistance to Putin’s unprovoked war and to help Ukrainian people endure the daily atrocities, but this is a particularly worthwhile way, because the music is so damned good.

Delivered with a clear yet powerful production, the songs combine harrowing, spine-tingling roars and ruinous howls, bone-jolting grooves, kaleidoscopic guitar work that introduces moods of dread, despair, and grief, as well as freakishness, frenzy, and ferocity, and constant tempo shifts whose changes are executed with technical precision.

The music is heavy as hell and often mauling, but also frequently intricate and mesmerizing. Some riffs drag and become oppressive, but the fretwork is just as capable of becoming fleet, fiery, and inventively adventurous, and the soloing is eye-popping. And thus it will likely appeal to fans of technical death metal as well as lovers of unchained aggression, and the evocative melodies create an enticing intersection with melodic death metal as well.

As noted above, all proceeds from digital sales will go to the band, and will be transferred by them for the support and needs of the Ukrainian Army. Keep that in mind when you exercise the “name your price” option at Bandcamp for obtaining the digital download, and please be generous. 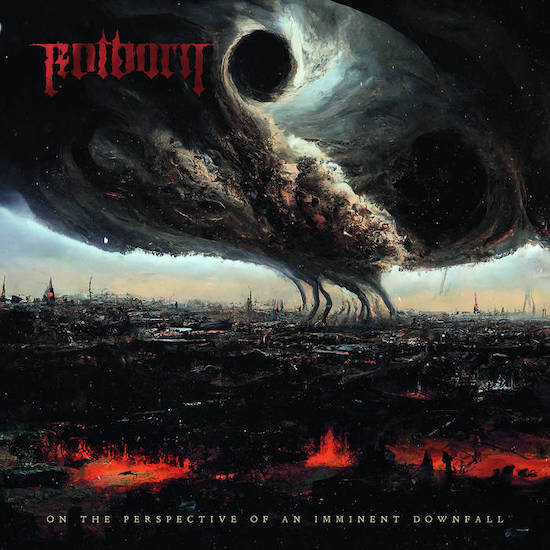 Next up we have the exclusive premiere of “Cleptoplutocracy“, a song off the debut album by the Brazilian death metal band Rotborn, which Redefining Darkness has scheduled for release on September 9th. Of interest, Rotborn‘s main songwriter and drummer, Nestor Carrera, is also a member of Escarnium as well as a part of the Redefining Darkness Team (he handles all of the label’s layout designs and many more art needs).

This new song features monster gutturals, maniacal drumwork, gut-slugging basslines, and riffs that are both brazen and delirious. The music is fast, comes for your throat with no holds barred, and is over almost before you know it. It’s an electrifying rampage, and is likely to leave you hungry for what comes next.

The name of the new album is On the Perspective of an Imminent Downfall, and Redefining Darkness is now launching pre-orders for Vinyl, CD, and digital editions. In addition, Rotborn will be touring Europe with Escarnium in September supporting this release. 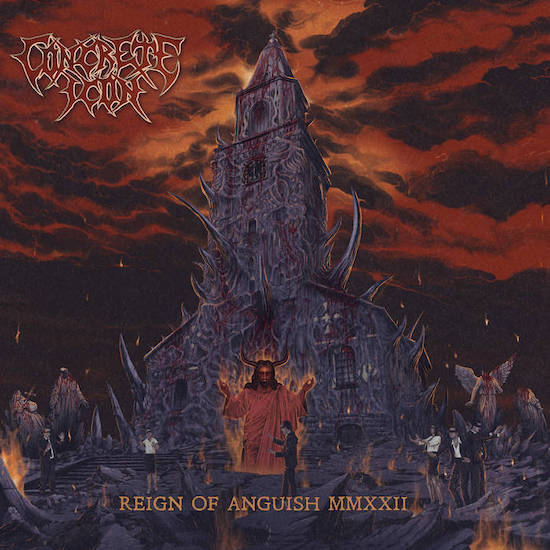 The third selection in today’s collection is the exclusive full stream of an album by this Finnish death metal band named Reign of Anguish MMXXII. This record combines Concrete Icon‘s first two releases from 2012 and 2013 — their debut EP, Where the Horns Reign, and their debut album, Perennial Anguish.

Both of those releases were originally put out by very small underground labels, one in Spain and one in Sweden, and their reach was limited. Recently, the band found the original recordings of all the tracks from those records and hired their engineer Artturi to completely remix and remaster both of them for this special release, which coincides with the band’s 10th anniversary.

Moreover, this new compilation includes new artwork, new packaging, and of course a new title, and Redefining Darkness will release it on August 5th. You can (and should) hear it all now, even if you’re familiar with the original releases.

The sound of these revamped songs is punishingly powerful, and is cutting as well as corrosive. Concrete Icon clearly know how to inflict thuggish punishment, thanks to mammoth rhythmic blows, jarring riffage, truly voracious growls, and wrenching barbed-wire screams. But you’ll quickly discover that there’s more going on here than heavy-handed brutishness.

Doses of insectile fretwork create moods of confusion and madness; harmonized melodies and piercing solos of anguish and misery slither, chime, and spiral through the bludgeoning tirades and the extreme vocal cruelty; morbid gloom descends, pain flares like a fire, and defiance rears up with claws bared. And there’s still more than that lying in wait… but see for yourselves: 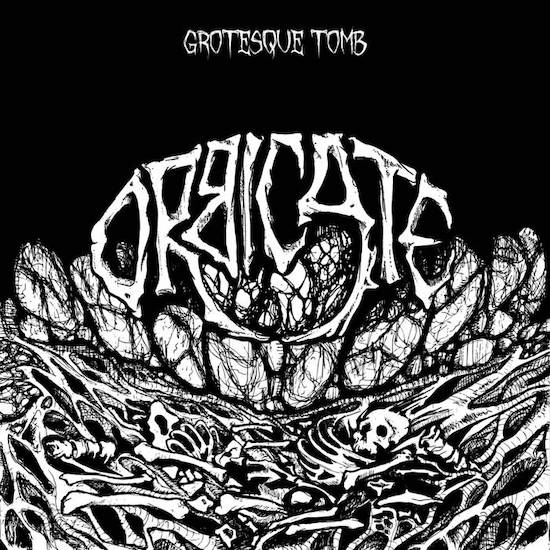 Last, but certainly not least, we have a full stream of Grotesque Tomb, the debut EP by the death metal band Orbicate from Calabria, Italy. It’s being released by Redefining Darkness today on cassette, which is in keeping with the band’s primitive, old-school sound, which the label compares to what “you might hear on some accidentally discovered late ’80s / early ’90s demo of some unknown act”.

Across the six tracks on the EP, Orbicate traverse a spectrum of savagery. On one end, they fly like hell-beasts sprung from cages, going flat-out in creating visions of savage, racing ecstasy, drums galloping and snapping, guitars buzzing like hornets, and a voice venting berserk violence in raw howls. Elsewhere, they still fire on all cylinders but introduce moods of harrowing despair, or they stomp like big red-eyed brutes bent on the infliction of cruelty.

And to keep you on your toes, the drumming shifts into punk beats, the band as a whole routinely try to beat you senseless, and solos erupt with clarity, creating paroxysms of insanity or visions of supernatural wraiths. There are plenty of sharply executed tempo-shifts as well, and rich offerings of swiveling, darting, and swirling fretwork, making this release a head-spinner as well as a head-hammerer.