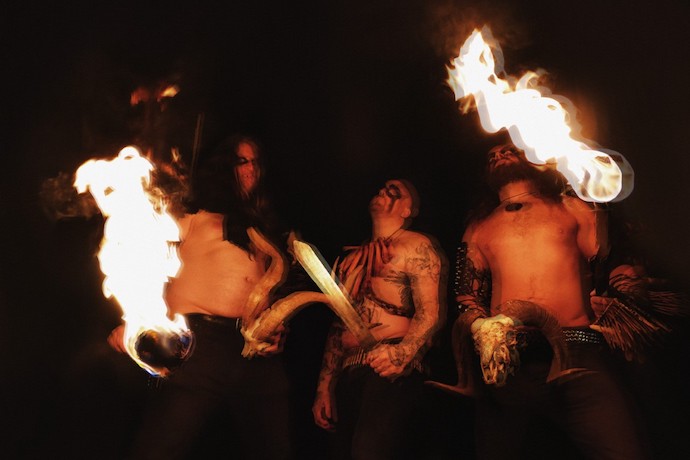 (Hope Gould prepared the following lusty review of two forthcoming releases that feature the deviant talents of Oregon’s Weregoat, a new full-length and a split with Eggs of Gomorrh.)

There’s a lot of merit in making love: Building the anticipation, savoring the smallest sensations, relishing in the way your partner’s body responds to your touch as the mutual hunger grows. Perhaps taking the time to create some ambience for the occasion, setting the stage for a beautiful exchange of energy and intimacy.

On the other hand, there’s a helluvalot of merit in hard ‘n’ fast fuckin’. With a career centered on unbridled, animalistic depravity, Weregoat know this all too well. Their forthcoming mini-album, coming in just shy of 23 minutes, packs all the punch they need to prove size may not always matter, especially when they know exactly how to use it. The Devil’s Lust, to be released on August 12th, is a crash course in bestial passion. Like a rendezvous with an old lover, fans will find a sick familiarity in revisiting the band’s reliable tricks and a jolting pleasure in their seasoned execution. 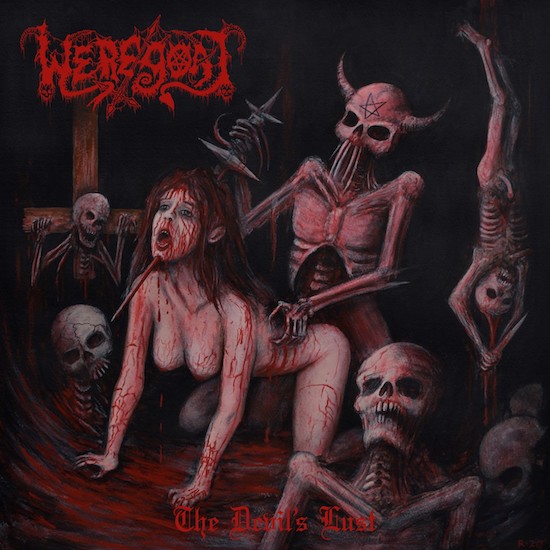 One such reliable aspect that could never be removed from the Weregoat conversation is the album art. Since the band’s eponymous 2011 EP, Unholy Exaltation of Fullmoon Perversity, Weregoat have bestowed the underground with some captivatingly explicit album art. Having featured the talents of “Putrid” Matthew Carr and Kerbcrawlerghost to name a few, there could be no one better to pick up that twisted torch than the legendary Rok of Sadistik Exekution.

On display is a naked woman dripping in her own blood being, erm, penetrated by the skeleton behind her, both with a dagger and otherwise. Crucified and impaled skeletons drawn in classic Rok fashion surround the happy couple and their romantic consummation. As is always the case, the band’s choice in album art nicely parallels the depravity contained inside. Let’s take things beneath the covers, shall we?

Notably, there is a refinement in the vocal production since we last heard from Weregoat in 2017; There’s a sharpness that lends itself to Nocturnal Helfuker’s maniacal, rabid delivery. They now sit significantly more on top of the mix than the cavernous, reverberant production we’ve heard on previous materials. Bestial war metal fans fear not, this is still very much true to form. The Devil’s Lust gives us everything we’ve been aching with anticipation for. In fact, it gives all that and the farm away (we’ll get there).

The reliable tricks start right from the top: bleating goats, feral growls, breakneck riffs, and Sadoseducer’s signature speedbag drums. The Devil’s Lust often leans into some rather merciless thrash territory as showcased on the first track, “Tempter! Abuser! Satan Her Master.” An onslaught of relentless drums and batshit leads diffuse into a doomy riff that sets up an ambush attack for the second track, “Merciless Execution”, which you can listen to below. The aforementioned sharp vocals are perhaps most at display here, lashing against the instrumental battery and gratuitous dive bombs.

Weregoat have always inserted discernable riffs into their brand of war metal very well and the earworms packed into The Devil’s Lust are no exception. (The riff that opens and closes the third track, “Festering Womb of Uncreation”, is particularly fun). Of course, no Weregoat release could be complete without samples of sex-crazed women. Despite the expected, there’s still something so jarring about hearing a woman say “I kissed the devil’s cock” before a barrage of octane-fueled Hellhammer skronk is unleashed.

When it comes to samples, there is no ignoring the one that sits right in the middle of the fifth track, a cover of Impaled Nazarene’s aptly named “Goat Perversion.” True to the original, listeners are treated to what I can only call a cacophony of the most unholy petting zoo for an entire minute (really, from 01:36 to 02:36). If you’re unfamiliar with the original track, I don’t want to say more than that for fear of spoiling your climax.

There’s also some excellent doom ala Archgoat to be found throughout. I can’t get enough of the sleazy groove on the last track, “Burn Deep the Signs of Hell”; that riff is pure filth. It lumbers towards a forked tongue declaration, “Life to the Dead! Death to the Living!” A surprisingly clean-toned guitar solo fades into the black oblivion, a delightfully malevolent note to end on.

Overall, there is often fearless musicianship in the chaos. Erupting solos, cheeky little licks, and inspired drum fills make The Devil’s Lust an incredibly fun listen from beginning to end. It’s the quick and dirty kind of romp that stays in your mind for, ahem, nostalgia purposes. 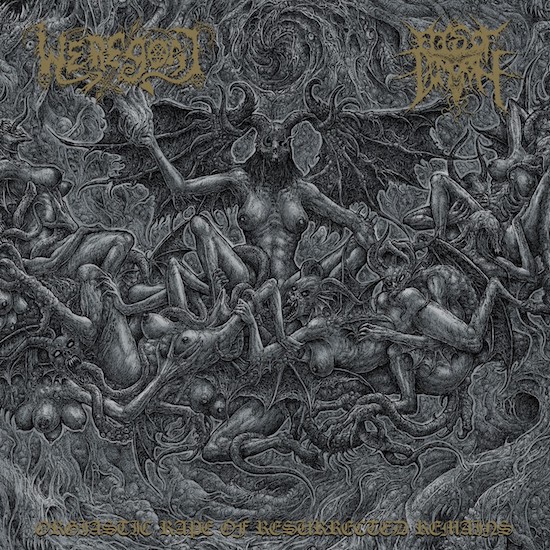 The reliable tricks are revisited: more orgasms, more maniacal laughing. You know, lullaby shit. I find Weregoat’s tracks on the split even more frenzied than those of the mini-LP. They nicely complement Eggs of Gomorrh’s brand of harsh but astonishingly technical blackened death metal. 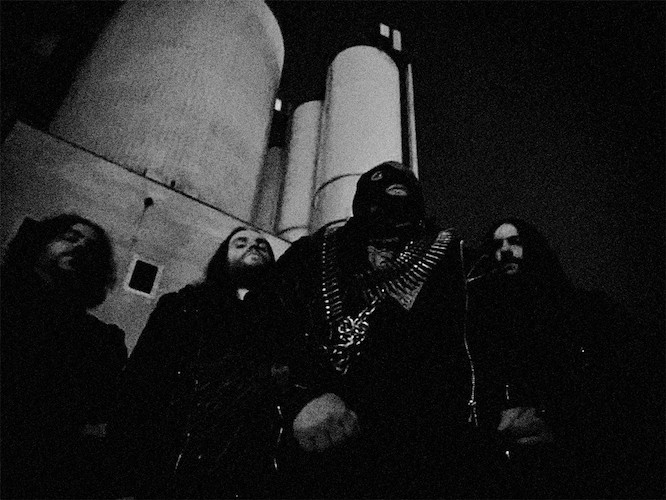 Where Weregoat’s side visits a sound inspired by pioneers like Blasphemy and Sarcófago, Eggs of Gomorrh offer a fresh take on bestial. Their attack is deadly and gratifyingly brutal. Gasping beneath suffocating angular riffs and commanding vocals are some seriously impressive .50-cal drums. There is method in the wall-of-noise madness that keen listeners will be mesmerized by. Between the two approaches, the split offers both cohesion and contrast to keep it a captivating listen.

It’s been a long five-year dry spell for fans of Weregoat. But between the lustful LP and the explosive split, a doubly satisfying return is in order. Afterall, Weregoat know the merit in hard ‘n’ fast fuckin’ when you need it most, and they’ve certainly aimed to please.

The Devil’s Lust and Orgiastic Rape of Resurrected Remains will be available to stream and order in physical formats on August 12th by Iron Bonehead Productions and Parasitic Records.

One Response to “WEREGOAT: A DUAL REVIEW (“THE DEVIL’S LUST” AND “ORGIASTIC RAPE OF RESURRECTED REMAINS”)”