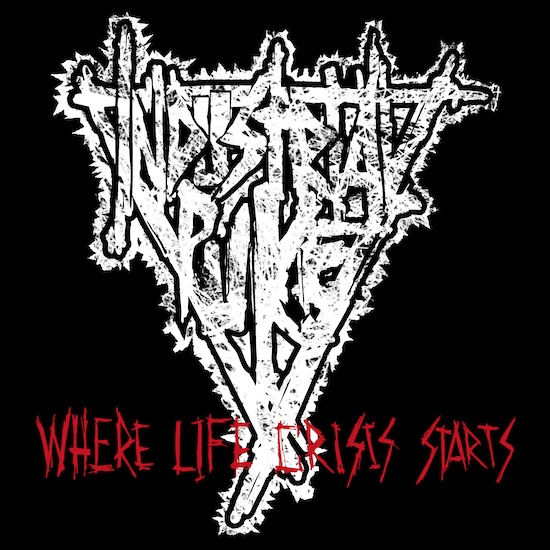 This is one of those song premieres where it’s tempting for us to just tell you, “Here — listen to this!“, because reading much more than that would probably take you longer than listening to the track. After all, the song barely clips the minute-twenty mark. But writing is what we do, and write we shall, but in a way that might give you a bit more to chew on than our impressions of this one song.

The song in question shares the name of this Swedish band — Industrial Puke — and it’s the one that slams the door shut on their debut EP Where Life Crisis Starts, which is coming out on September 16th via Suicide Records. The EP itself is a swift kick in the jaw, four songs that collectively fight with you for less than eight minutes. And hell yes, it’s a fight. 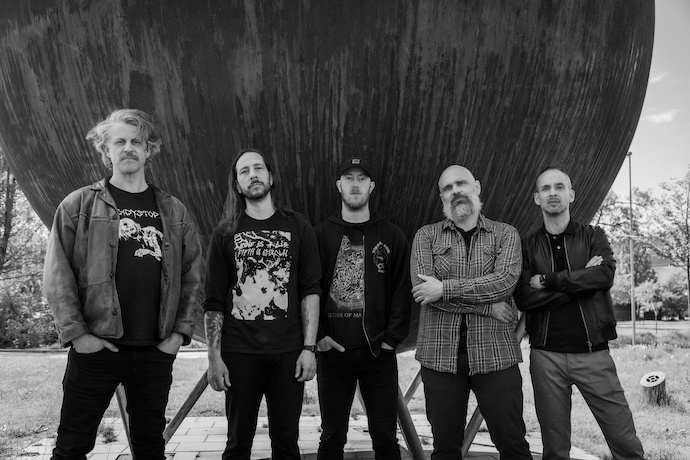 Industrial Puke is a new name, but the members aren’t newcomers. Their collective resume includes work in Rentokiller, Burst, Obstruktion, and more. Their MO in this new venture is a combination of Swedish death metal, crust, and hardcore, something like Dismember meets Discharge and Disrupt in a cage match.

The weapons they bring include mauling, chainsaw-toned riffs, skull-smacking percussion, gut-rumbling bass-lines, and the kind of acid-drenched, acetylene-torch vocals that make the hair stand up on the back of your neck. It’s the kind of weaponry that’s heavy as hell and formidably destructive, well-chosen tools for raw violence.

But the thing is, although the songs may be punishing in sound and abundantly fueled by visceral hostility, they’re not chaotic. They’re well-structured, heavy-grooved, and catchy, as well as caustic and corrosive.

The EP opener “Mental Taxation“, which was previously released as a debut single and video a couple months ago, rumbles and rolls, scampers and gallops, seamlessly (and savagely) blending the tank-like weight of Swedish death metal and the feral energy of punk, with a blend of hardcore yells and vicious screams. It gets the adrenaline going damned fast — and it’s damned hard to get out of your head once you hear it.

With “Banished“, the band crank things up into an even more maniacal discharge — drums hammering, guitars cutting like massive circle saws, the bass gouging through concrete, and the vocals an unhinged expression of violence. “Constant Pressure” provides no relent in the attack, this time moving with the d-beat and growling like a humongous bestiary. The bass makes it sound like you’ve been transported into a cement mixer moving at high speed, and the guitars also wail like tortured spirits.

And that brings us to the song we’re premiering today — a storm of scathing and blaring riffage, ruinously battering drums, and berserker vocals in which fellow Suicide Records label-mate Dödsvarg (Jon Ekström) joins in for extra fury.

This bleak and brawling bombardment of an EP as a whole is long enough to get your pulse pounding hard and fast, and so compulsive that it’s really easy to run it through a bunch more times in a row. But it’s short enough to leave us wishing for me — a wish that will be granted in the late spring of next year when Industrial Puke are planning for the release of a debut album named Born into the Twisting Rope (also via Gothenburg-based Suicide Records).

Pre-orders for the EP are open now: