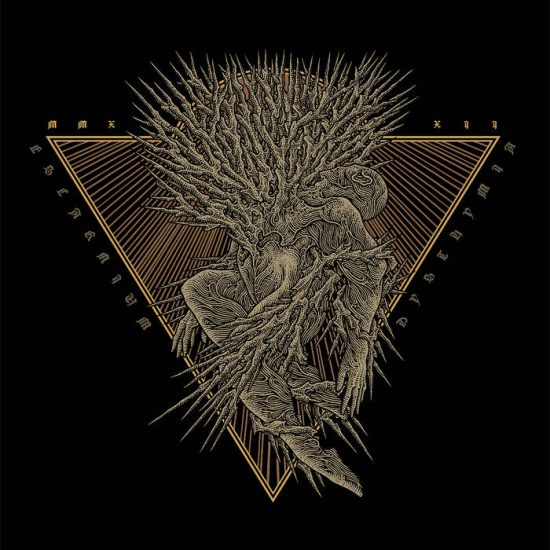 When we present song premieres we usually begin with information about the band and the forthcoming release, quickly followed by impressions of the music, and maybe, after all that, something about the conception of the song or its lyrical themes, assuming we know anything about those subjects. But for the Escarnium song “Deluged In Miasma” we’re reversing the usual order, and we think you’ll soon understand why.

Here is what Brasilian guitarist/vocalist Victor Elian tells us about the song’s inspiration and significance:

So, there is an expression in the area I grew up for when you have a place that kind of has a bad vibe/aura around it. You say, this place is ‘full of miasma’. Or, for example, if you have something like an old jacket of someone that has died, some people may say… ‘Don’t wear it, it is full of miasma.’ It’s sort of like a local superstition.

When the numbers of the dead from COVID started to get really high, our president ignored all the signs causing even more deaths. With all that was going on, I was thinking about the history of Brasil, all the bad things that we face on our daily life living in Brasil… so this song became sort of a metaphor of the dark side of Brasil. It’s a place that always believes things will get better, but it never gets better. Every good idea, or any good initiative, never comes to fruition. Life in Brasil is cheap. So, our land is full of miasma…

On the news recently one doctor said, Brasil now is like a leprosy home isolated from the rest of the world. Basically, every line of the lyrics is based on the dark side of Brasil from the coming of the Portuguese and slavery up to modern-day atrocities. 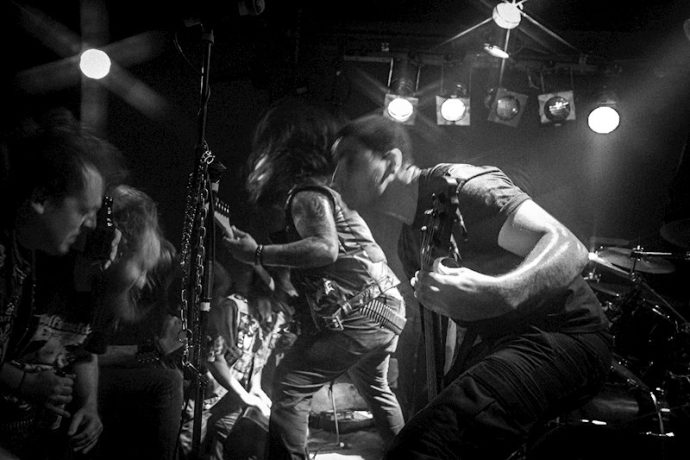 Those are moving words, and harrowing ones. They are also emblematic of larger themes across Escarnium‘s new album Dysthymia, and we want to share those with you as well. But first, let’s discover how the band have translated the thoughts behind “Deluged In Miasma” into sound.

Consistent with the dark outlook of the themes, eerie tones ring and writhe in sounds of frantic desperation — and you hear them through an overpowering maelstrom of chaos. The drums fire at breathtaking speed, the guitars create a roiling mass of violence, the vocals roar from the gut with extreme vehemence, and the band punctuate those ravishing assaults with bursts of jolting and blaring extravagance.

Sounds of dismal moaning also undulate through the extreme turbulence and jackhammering savagery, revealing agony in addition to despair. When the momentum of the song briefly slows, those feelings of grief and hopelessness deepen, and when the band accelerate again, the lead guitar skitters in a fever, and screaming sensations veer from channel to channel, leading into a finale of nightmarish, skull-shattering intensity.

Regarding the overarching themes that drive Dysthymia, here again are the words of Victor Elian:

2022, 03 A. C. (after COVID), More than 6 million dead, gasping for air with infected lungs. And still counting… Hypocritical evildoers dictating the rules of the “modern world”, dragging us beyond what’s primitive… the Taliban, ISIS, murderers disguised as messiahs… Modern dictators protecting families and lands, establishing the paths we trudge towards what we hope to be progress, but ultimately is revealed to be decadence. All in the name of “freedom”, they say!

Open skies, borderless internment camps. Opposers (me, you, them?) Annihilated through slow famine and misery. Radioactive sentences pronounced, and incoming inglorious demise! Anguish Ad Nausea. Endemic process, a shadow that eternally haunts humanity… And a single virus unveils our insignificance in front of the grey kingdom, that never ceases to expand.

We dedicate this release to all of those dead in the name of “reason”, inside the corridors of the Colônia Hospital, or in the frozen fields of the 731, the gulags, Auschwitz and so on; mass murders, prison systems, or on the streets of all the capitalist metropolises. Countless are the days of bloodbath. Death is always reigning and in common graves rest the old, the hated, murderers, innocent, religious, atheists, the weak, human rejects, with or without comorbidities, denialists without said reason. The grey kingdom always growing, without distinction, they all lie together, we all lie together.

Dedicated to all of those silently screaming, perishing, always about to finally live… 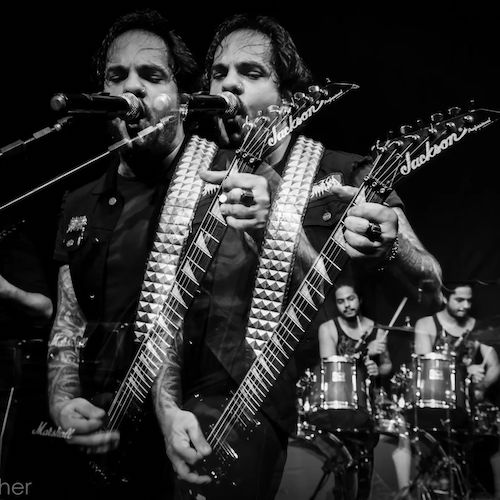 Dysthymia consists of six tracks and nearly half an hour of music, including a cover of the title track to Grave‘s 1991 album Into the Grave. One of those other songs, the breathtaking “Far Beyond Primitive“, has already been premiered (at Invisible Oranges), and we’re including that stream for you in addition to today’s premiere. But once again, we need to share the band’s explanation about the subject matter of the music:

The background of the song “Far Beyond Primitive” is about the Colônia Hospital in Brazil. Nowadays, it’s referred to as the Brazilian Holocaust. At that hospital there were not only mentally disabled people, but also drug addicts, political enemies, homosexuals, and the homeless. Official estimates report over 60,000 deaths occurred inside the wards between 1903-1980. It was a theater of genocide. On the end of the track, you can hear the real screams of the people filmed in a documentary. It’s incredible how mankind can so easily subjugate what they deem as “unwelcome or unwanted” people. Like always, our lyrics are connected with reality; exploring topics surrounding humans without humanity or human decadence.

Dysthymia comes a long six years after Escarnium‘s last album Interitus (which we premiered and reviewed here), and in that time main-man Victor migrated to Germany, and the band now includes members from Germany and the U.S. as well as Brasil — namely, drummer Nestor Carrera, lead guitarist Alex Hahn, and bassist Vitor Giovanni, in addition to Sr. Elian.

Dysthymia features arresting cover art by @Unggur.yulianto and layout by Nestor Carrera. It will be released by Redefining Darkness Records on September 9th on LP vinyl, CD, and digital formats. Pre-orders are open now: