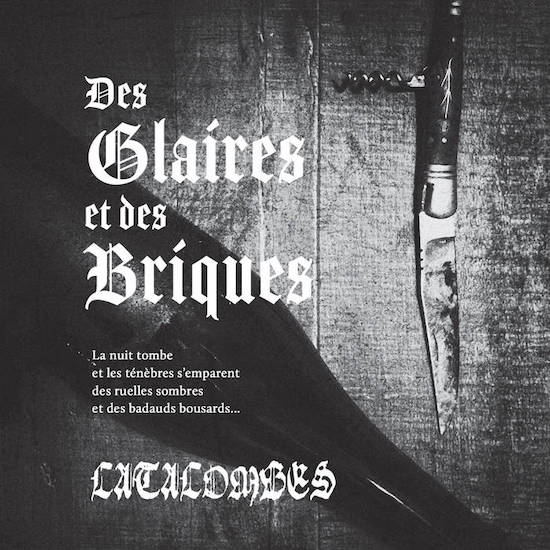 If you take a close look at the cover photograph for Catacombes’ new album Des Glaires et des Briques you’ll see that it depicts a wine bottle and a corkscrew resting on a rustic table. But you’ll also see that the wine-opener doubles as a knife, and shadows encroach along the borders. The title is rendered in an old gothic or medieval font and beneath it are words which Google Translate renders as follows: “Night falls and darkness seizes the dark alleys and busy onlookers…” Sun & Moon Records, the Transylvanian label releasing the album, invites us to “Pour a glass of wine and explore the genuine atmosphere of medieval obscurantism!”

What is one to make of all this visual and linguistic imagery? It’s suggestive of archaic themes and perhaps a degree of sophistication, but equally suggestive of nocturnal menace and maybe worse. Consider that the members of the band have chosen as their noms de guerre Le Démoniaque, La Damnée, and Le Vilain.

Well, we can’t help but engage in guessing games as a result of such intrigues, but it’s better to let the music speak for itself, and so let’s move directly into “La Bête d’Acier“, the song we’re premiering from the album today. 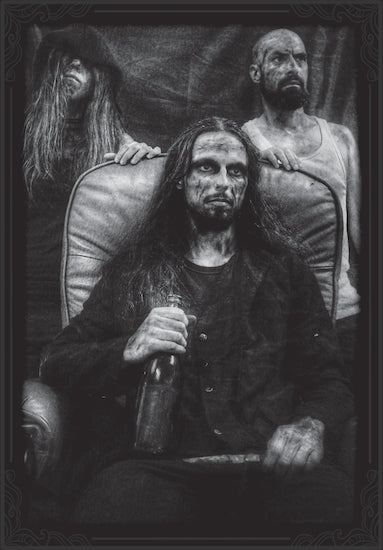 There are indeed elements of medieval atmosphere in Catacombes‘ music, but this isn’t some fusion of black metal and dungeon synth. It has a more rustic feel and a greater visceral strength than you might expect. It also drives the mind toward dire and disturbing infernal visions, but is barbed with hooks that are splendid as well as sinister.

“La Bête d’Acier” is muscular, swaggering, and full of cold-eyed menace, thanks to a skull-smacking snare beat, a big throbbing bass, and grim vibrating riffage. But there’s madness in the music too, when the guitars burn in bright fevers of despair and the vocals emit crackling and gagging snarls. The high swirling melodies are unsettling but arresting. They burrow like ear-worms but there’s something glorious about their ringing translation of deleterious moods.

The infectious effects of the song’s big primal grooves are formidable, but eventually they yield to maniacally battering beats and bass-guitar convulsions, joined by screams of even more incinerating insanity and grand fanfares of extravagance that carry the song’s central melody to blazing new heights.

In all these respects the music benefits from a relatively clear and evenly mixed production that still packs a formidable punch.

Des glaires et des briques follows Catacombes‘ 2017 debut album “Le démoniaque” and a 2018 EP named Accueille le Diable. It also marks the expansion of the band from a solo project of Le Démoniaque into the Montréal-based French/Canadian trio identified above.

Sun & Moon will release the album on September 13th in digital and CD formats. The digital pre-order is available now, and the CD pre-order will be available soon.

Below we’ve also included a stream of the first single from the album, the title track “Des Glaires et des Briques” — which is an even more gloriously exhilarating track than the one we’re presenting today, and home to some absolutely killer riffs — as well as live footage of the band performing in early 2020 at Montréal’s Piranha bar.