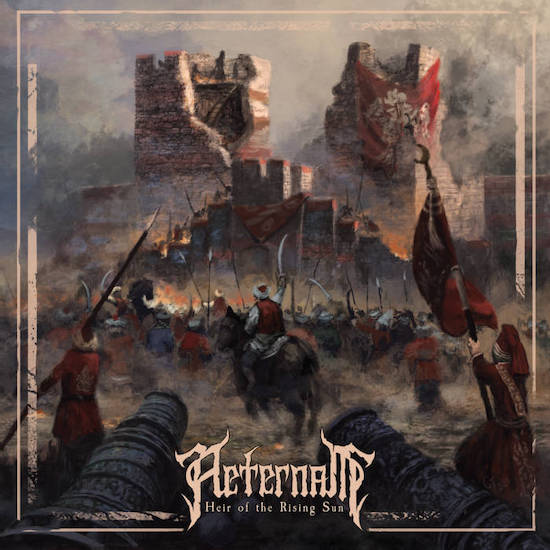 (DGR wrote the following extensive review of a new album by Aeternam, which is coming out this Friday, September 2nd.)

The career path that Quebec’s Aeternam have taken in the lead-up to their latest album Heir Of The Rising Sun – their fifth overall –  has an interesting amount of twists and turns in it for a group whose genre descriptors boil down to a blackened death metal/folk metal hybrid. It’s the case with many other bands as well, but obviously those are dealing in differing shades, and in Aeternam‘s it feels more like a fight between two different styles, with each album a different snapshot at different points in that battle.

To say that the folk metal side has been winning out would be putting it politely of course, but that descriptor is inadequate here because “folk metal” often tends to conjure up imagery of a bunch of extra musicians with accordions, hurdy-gurdys, and flutes rather than a means of highlighting the music’s cultural aspects. Aeternam have often pulled from Middle Eastern history and mythology, and so too you often hear instrumentation from that region.

At first Aeternam used this effect in combination with a heavy Behemoth influence but over the years the band have lightened up – with perspective here, the band remain fairly heavy in comparison to a lot of other bands – and instead have become something more of a show, allowing themselves to stretch in a variety of different directions. In the case of Heir Of The Rising Sun, Aeternam have decided to make a thematic concept album focused on one period of time centered on the closing song ‘The Fall Of Constantinople’ – with all of the flavorings suggested therein. 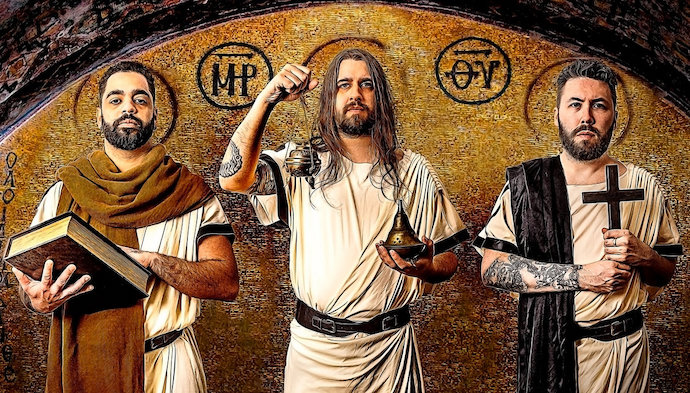 The specific focus and genre-shift aren’t the only things that have changed for Aeternam. The band have a new guitarist and bassist in the ranks as well, meaning that vocalist/guitarist Achraf Loudiy and drummer Antoine Guertin are now the longest-tenured members of the group. Songwriting-wise this may be why the latest snapshot of Aeternam‘s career leans so heavily on the “folk metal” side of the ongoing genre-battle.

There’s a lot of extra instrumentation on Heir Of The Rising Sun outside of the usual core of the band, and likewise a lot more prominent clean singing. The instantaneous and crushingly heavy nature of the band’s initial releases has been traded in for something more sleek. Songs on Heir Of The Rising Sun are a lot more involved than they have been previously so some of that instant appeal of a heavy-as-hell segment of a song has switched in favor of music more focused on keeping the listener engrossed in the album concept and time period.

Aeternam still break out some heavy stuff on Heir Of The Rising Sun but it’s a lot less immediate than in the past. The mileage you get from Heir Of The Rising Sun may boil down to how quickly the first three songs lock in with you, because those are the album’s blueprint for the most part and they are the ideas that Aeternam act upon.

Early single “Beneath The Nightfall” makes it very clear that Aeternam are going to work damned hard to transport you to Costantinople by basically throwing everything and the kitchen sink at you. There are so many layers packed into that particular song in between the bevy of orchestration, varied instrumentation, the core heaviness of the song, the additional choirs, and all the other differing vocal styles. “Beneath The Nightfall” is both a lot to take in and also plays every card Heir Of The Rising Sun has in one particularly dense, five minute go. It’s a very bombastic song that plays out like the stage setting of a musical, guiding the listener through key players and areas of the album and what the band hope to expand upon over the remaining songs.

“Irene”, on the other hand, is more sing-song in its nature and is driven largely by a grooving riff that wouldn’t be too out of place in a prog-metal album. It’s a little angular at times but always cycles back around to keep the headbanging going. Of the two songs so far, it’s certainly the bouncier of the two. You’ll also notice how both the backing choir layers and clean singing of the album are way more up front within the song. After its intro, nearly every song on Heir Of The Rising Sun has a lengthy run-time and “Irene” is in that vein, as it also covers ground like its immediate predecessor. The only difference is the journey from the catchy lead riff and sung nature of it to a heavier and ominous closing section, and back in time for the song to segue into “Nova Roma”.

The times throughout Heir Of The Rising Sun where all of these elements really converge, however, are spectacular. “Where The River Bends” is something of a turning point for the album, where everything finally coalesces together for the last few songs of the album. Since so many ideas are in play early on and there is so much musical scene-setting happening, Heir Of The Rising Sun can feel all over the map at first, but around its middle segment and final closing numbers Aeternam plant the album firmly in the ground and use that style to close out the narrative.

They’re still huge fans of having a whole bunch of quiet interstitial pieces within each song, where the mood and even musical style suddenly change once the music returns, but it’s a little more natural as you reach the closing moments. This is why Aeternam probably chose “The Fall Of Constantinople” as one of its advance songs ahead of the album release. It covers as much ground as first single “Beneath The Nightfall” but benefits from having much of its musical foundation already built, so that it can spend its eight minutes mapping out section after section, with less focus on “sudden this, and now this, and also we have this over here”. It’s another bigger and bombastic number but you’re talking about an album where if the song isn’t a minute-thirty-plus scene setter for the next song, it’s going to clear six minutes with ease.

Aeternam went “big” on Heir Of The Rising Sun. They already had a giant sound long since refined over the course of four previous albums, but on Heir Of The Rising Sun, Aeternam are writing epics. In the two years between releases it seems like Aeternam decided that in the process of musically hammering the Earth to a pulp, it was time to add a lot of extra “stuf”‘ to the overall mix, so that Heir Of The Rising Sun is as much spectacle as it is a new record. The songs here are densely packed and full of diversionary breaks so that you never forget what musical region of the world and what timeframe you are a part of here. The closing song being the previously mentioned eight-minute epic “The Fall Of Constantinople” basically seals that deal.

Heir Of The Rising Sun is an album with a lot of ambition on display and it’s hard not to be won over at first by all the different things packed within each song. You’re not just listening to the planet smashers anymore, as Aeternam have taken their formula for Al Qassam in 2020 and effectively blown it up to four times its original size, amplifying the folk-flavored melodicism more than anything else. It’s a big album that is likely to win a lot of people over by its sheer pyrotechnic display.

One Response to “AETERNAM: “HEIR OF THE RISING SUN””