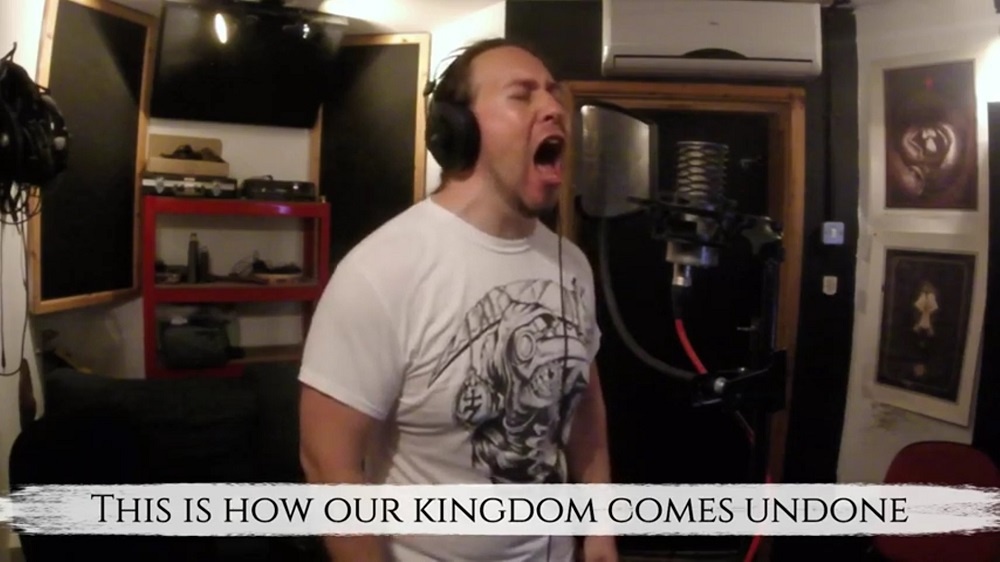 At the beginning of the month the UK death metal band Beyond Grace celebrated the first anniversary of the release of their second album, Our Kingdom Undone.

To commemorate the occasion, various members of the band have recorded a series of playthrough videos for some of their favorite tracks from the record, and we’re premiering the first of those today – a one take, no cuts, vocal rendition of the album’s 12 minute title-track as performed by our very own Andy Synn.

After a couple of years spent riding out pandemic hell in a home-bound, sloth-like existence, some of us can’t even walk for 12 minutes without gasping, but Andy has clearly kept himself and his voice in better shape than that, fearlessly pumping out the words in a compendium of frightening gravel-throated growls and maddeningly serrated screams.

Of course, there’s a lot more to the song than the harrowing vocals and hopeless lyrics (which we’re sure you’ll soon discover), but those are the primary focus here, and we’re more than happy to have been able to give them a well-deserved platform!

Not only that, but Andy‘s also provided us with a little insight into the background and development of the song itself:

What can I say about Our Kingdom Undone?

Obviously, as the title track, it in some way represents the entire album in microcosm, and because of that we’ve always wanted to highlight and promote it a little more… but, being over twelve minutes long that’s not always been easy (or possible). Heck, we’ve only performed it live a handful of time so far just because of how much of our set time it eats up!

Interestingly, despite its extravagant length, and the fact that it’s essentially composed of three different “movements”, it wasn’t as hard to write as you might imagine. For some reason everything just fell into place with this one – possibly because we’d learned so much from the rest of the writing process, and possibly because I’d had this idea in my head for a long, three part epic for a while, which provided a sort of basis and structure for us to build on right from the start.

Funny story though – after the record’s release was first delayed I remember expressing my concern that the lyrics might no longer be relevant when it finally came out… how naïve I was! If anything, things have actually gotten worse since these songs were written, which means that the words I’ve written (and the emotion(s) behind them) are more pertinent, almost painfully so, than ever.

Still, that doesn’t mean we’re about to give up (despite having had a pretty difficult year since the album came out) and you shouldn’t either. The only way out is through, after all.

Beyond Grace spent the last year since the album’s release touring up and down the UK, but they’ve got more shows lined up before the end of the year, and plan to do more touring both at home and abroad in 2023. They’ve also allegedly got a single/video for a “top secret cover track” that they’re waiting for the right time to unveil, and have already written several new songs for their (as yet untitled) third album.

If you haven’t yet checked out Our Kingdom Undone, you should do that via the Bandcamp link below, where you can hear the studio version of the track that’s the subject of today’s playthrough premiere, and follow the band on Facebook, Twitter, Instagram, etc, for more updates on their next steps.

2 Responses to “AN NCS VIDEO PREMIERE: BEYOND GRACE — “OUR KINGDOM UNDONE””