(Distance is only fictional for Trhä and their notorious opus vat gëlénva!!! Here is an in-depth review by Axel Stormbreaker.)

History confirms that the more network connections spread exponentially, the more its considerate users obtained the opportunity to study, comprehend and optimize vital elements of distinct cultures. While it’s accurate how most will now use it as an outlet for toxic negativity, there was indeed a time when it stood more as a useful tool, not long before the eventual “upgrading” of social media platforms. Of course, the way I navigate my focus nowadays, there are moments I can’t distinguish most of what is projected from the inner contents of a garbage can. It feels nearly inconceivable how its current pile of disposable data has so far assisted our societies on their very structural level.

That being said, art belongs among those aspects that managed to benefit more than any could hope for. After all, this is how I was granted my own chance to explore the further depths of Japanese extreme metal. I believe my first impressions were initially made, nearly a lifetime ago, by Loudness‘ “Heavy Chains” from Thunder In The East. It was then, when that classic Manowar-based riff stormed in, with that weird accent shrieking on top, that blew my brains to pieces. From that point onwards, Sigh came along, of course; then Gargoyle, Greenmachine, and Hurusoma. And a few years later, Arkha Sva and Magane followed, along with obscurities in the likes of Manierisme, Yvonxhe, and Albiorix Requiem. 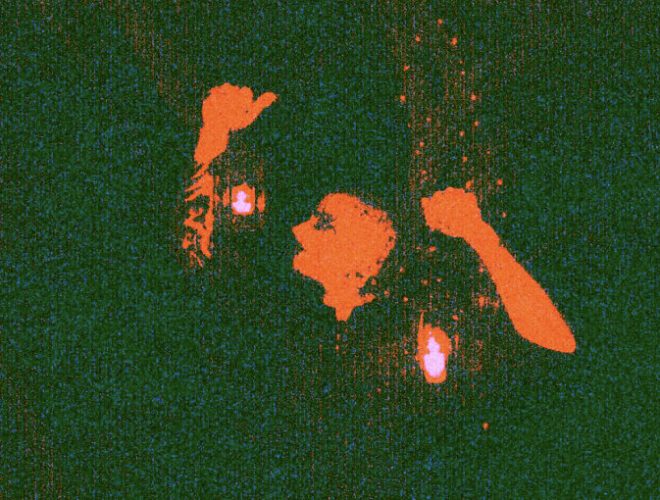 My point is the more the internet spread, the more musicians could assimilate information for their own self-improvement. Internet may be a joke nowadays, but its years of good use educated people to sounds, experiences and fountains of inspiration they would never have access to otherwise. Let’s face it, how many quality bands consisted the old USBM scene in the early/mid ’90s? And how many indicated distinct influences from the far east?

While vat gëlénva!!! strays far from unwanted plagiarism, its opening opus “ljúshtaeshrhendlhë jecan glézma” aims at a familiar lo-fi aesthetic. Either he’s being transported ten feet below, or in the interior of a claustrophobic closet when crafting his sounds, it doesn’t matter. Trhä did manage to nail the said feeling to a comparable degree unlike any US band I am presently aware of.

Of course, the very amalgam of its tenacious riffing is a different subject entirely. On the one hand, we have melodies reminiscent of far-eastern raw black metal (i.e., the folkish tune surfacing in the third minute of “grã sôhhlen bem rhôn trhãthàs”), or even synth effects that reach origins of peculiar nature (“ödënthändelä vòn la gönmëtwa”). Alternatively, the ongoing struggle variates from death metal interventions to warp-speed USBM charges, as well as miry thrash decelerations. Or even Finnish funeral-doom treadings and post-black enshrinements. Here, I must state that, despite how the album’s closing opus stands as its most diverse track, the depressive shades of “sëtrharhanlha” deserve an individual mention for honoring Sadness as the artist’s primary foundation.

However, the actual result manifests some apparent downsides, since small improvements could have been made on a structural base. While some would argue 65 minutes feel a bit too long for a raw black metal record, I am bound to insist we can never have too much of a good thing on our hands. It’s just that specific sections sound as if they’ve been pieced roughly together, especially when tracks such as “grã sôhhlen bem rhôn trhãthàs” would benefit from some spare space to breathe. Nevertheless, the fact the entire release sounds as if it was recorded on the spot does amplify its spontaneousness, pushing its status to the very borders of primevality. Especially, when most new metal offerings sound far too coerced, as if the said bands have been writing songs out of experience, instead of letting pure impulse drive their focus.

Secondly, any apparent dissipations indicate the production of each separate track was concluded during different time periods. Which feels somewhat confusing, as the said anomaly favors vat gëlénva!!! as a compilation of individual ideas, rather than a concise, standalone album. Nevertheless, people like us (if you have read thus far, you definitely enjoy raw black metal) are more or less accustomed to the murkiest of sounds, to a point such defects are of no big issue. Still, should its digital version ever receive a proper physical release (other than the cult-enthusiastic format of cassette tape), a remixing attempt would be most advised for the sake of appropriate consistency.

All in all, despite how vat gëlénva!!! presents flaws too grave for conventional tastes, we need to establish that unrefined black metal has never been about perfection. Taking into account Damián‘s inventive restlessness, it’s impossible to procure such an excessive amount of creativity AND treat its every aspect on all occasions. While some people’s vision dictates that all should be geometrically alligned to their stainless design, some feel this itching urge of constant productivity instead; an impulse they need to serve in order to lead a fully functional life. Since I don’t know the artist personally, I cannot speak of how his perception guides his path, other than making vague assumptions based on his recorded discography. But what I do hear is this youthful rush streaming in vitality, an enjoyment so unscathed, and a simple taste of his art is more than enough to prove it.