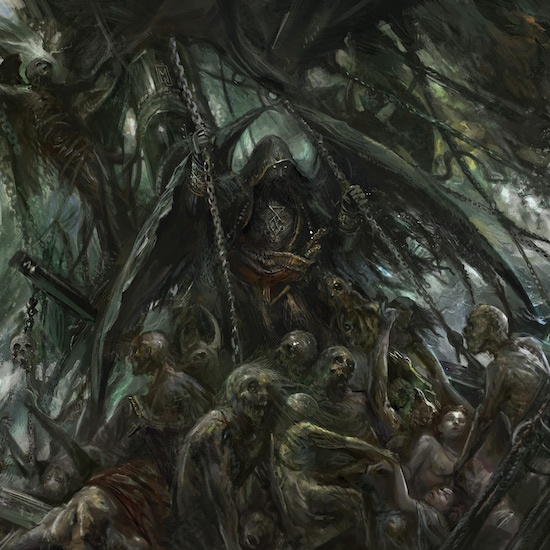 Abyssic‘s last album High the Memory, which we reviewed and premiered here, prompted us to wax poetic

“In these complex and richly textured compositions, which draw upon ingredients of funeral death/doom, black metal, and prog, augmented by classical orchestration (and the use of Mellotron, Minimoog, and upright bass), Abyssic create combinations of crushing power and mystical evanescence, of oppressive gloom and fragile, gleaming beauty. Dread and devastation stalk this vast musical landscape, furrowing the earth with great troughs of misery and despair, while brilliant stars wink overhead, blazing comets streak the night sky, and the borealis shimmers in unearthly brilliance. The effect of these juxtapositions is harrowing and hypnotic, magisterial and monstrous.”

Well, “poetic” is of course a relative term here at our putrid enclave, but you get the idea: This Norwegian band’s music has a way of firing the imagination, and trying to describe it in more conventional terms falls flat by comparison. Now we find ourselves in a similar place, because Abyssic have a new album on the way, and we’re again hosting a premiere to help advance the cause. 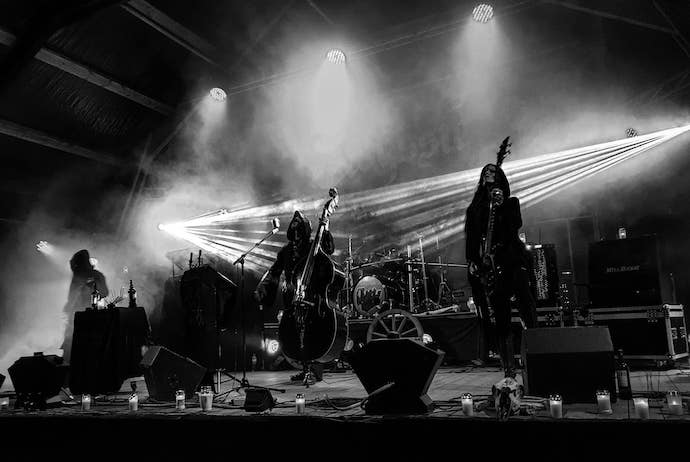 The name of the new album is Brought Forth in Iniquity. The cover art by Mitchell Nolte makes a stunning first impression, and so does the song we’re premiering today in advance of the album’s release by Osmose Records on October 28th.

The title of that song, “Mirror of Sorrow“, hints at one of the moods in the music. High-flown waves of wailing melody manifest agony and despair on a vast scale. Ringing and swirling piano keys portray wistfulness and grief in more fragile and less grandiose terms beneath celestial ambient gleams, balanced by spine-tingling growls of abyssal depth and scarring impact.

But sorrow isn’t the only mood in the song. The band also bring forth cold-hearted hammering grooves and harrowing screams, bursts of feverishly skittering fretwork and blazing synths, revealing visions of calamity conjoined with haunting beauty. And in most of its phases, the music scales heights of towering magnificence.

The song also tends to bear out the preview of the album as a whole offered by the label: “The music is much more violent, faster, and the lyrics are even more haunting than on the last two albums. The orchestration is beyond everything they have done so far and is even more beautiful than ever. So, in other words, Brought Forth in Iniquity is faster and more brutal and more beautiful than ever. All we can say is: Expect the unexpected”.

Osmose will initially release Brought Forth in Iniquity on CD and digital formats, and pre-order opportunities for those are now available. The vinyl LP version will follow later this year.