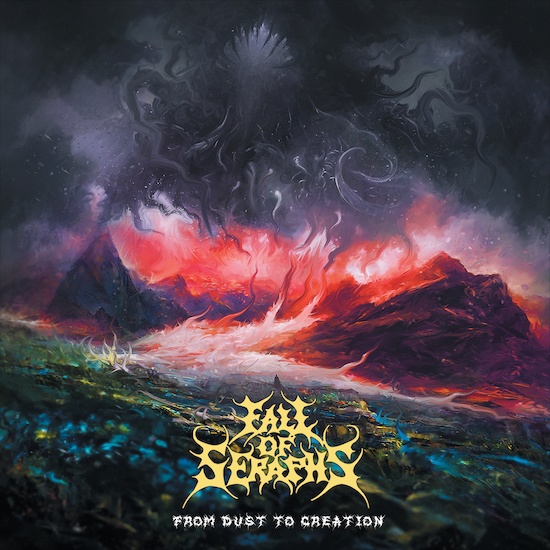 As you can see, Mark Erskine of Erskine Designs has created cover art for the debut album by Fall of Seraphs that’s guaranteed to seize attention with its colorful rendering of supernatural monstrosity and fiery, storm-tossed chaos. It really is the kind of eye-catcher that’s likely to pull listeners into the record, even those who know nothing about the music. But more than that, it also provides a great match for the kind of death metal this French band have created on this debut album, which is both dazzling and monstrously malignant.

The album’s name is From Dust to Creation, and like the title it flips lots of things on their heads. The music is brutish in its skull-busting thuggery and as hostile as rabid wolves, but incorporates the kind of guitar work that spins heads and sends them shooting off into the stratosphere, and the band blend it all together with a vivid sense of dynamism and infectiousness in the songwriting.

You’ll learn that for yourselves through today’s premiere of the album’s fifth track, “Psychotic Troubled Senses“. 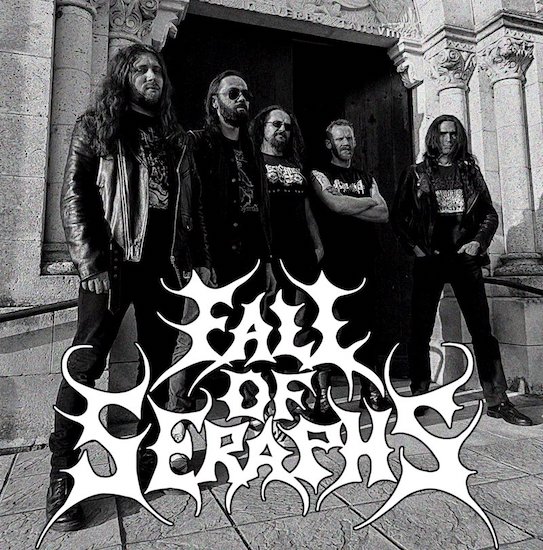 Fall of Seraphs pack this new song with jackhammer grooves and bracing rhythmic gallops, and cut loose with blast-beat fusillades as well. All that gets the pulse racing and heads moving by itself, but what goes on around the punishing and convulsive beats is even more electrifying.

For one thing, the riffing is fast and utterly crazed, discharging a changing amalgam of feverish feeding frenzies, brutish jabbing, and sounds of writhing madness and squirming agony. For another thing, the guitar soloist spins out swirling, screaming, and supernatural-sounding arpeggios of delirium and mystery. And for yet another thing the vocals growl, bark, and howl with just as much fervently unhinged aggression as everything else.

Take another look at the album’s cover art, because that is a vision of what this sounds like:

For those of you new to Fall of Seraphs, the band includes current or former members of such underground acts as ADX, Manzer, Ossuaire, Simulacre, Ad Patres, Reverence, and Quintessence, among many others — and all that experience shows in the music. The album adds to a blooming (night blooming) discography that includes a 2017 debut EP (Destroyer of Worlds), and a 2018 split with Trepanator (titled Incarnation of Torture).

From Dust to Creation will be released on CD and digital formats on October 24th through the formidable Spanish label Memento Mori, which strongly recommends it to for fans of classic Morbid Angel, Deicide, Vader, Immolation, Krabathor, and Angelcorpse.

Below you’ll find pre-order links plus a stream of another riveting album track, “The Eradication Dogma“.