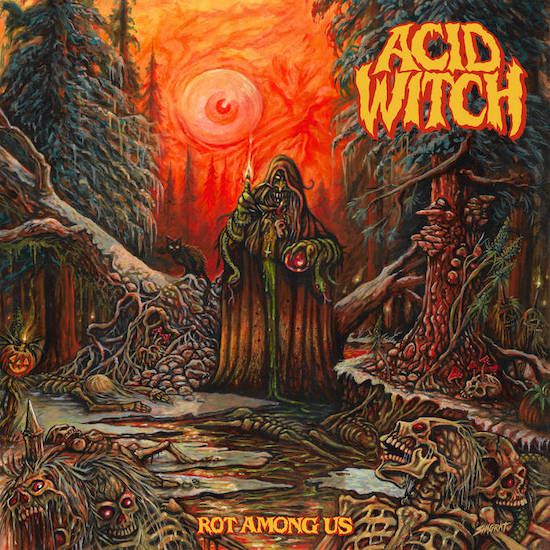 (Detroit’s Acid Witch have a new album headed our way (of course the release day is on Halloween), and in the following review Wil Cifer shares his thoughts about it.)

This morning, I took a break from checking out the updates as to when Hurricane Ian will be coming to rock my neighborhood like the Scorpions, and found the new Acid Witch in my in-box. The anxiety left me when I pressed play. While Ian might rain on my Halloween parade going into the first weekend in October, these guys kept my spirits up.

The bar is set high since these guys are one of my favorite bands. Dressing death metal up like a Spirit Halloween Store on LSD is a beautiful thing that speaks to my soul on every level. The first track is spooky intro with just enough metal to foreshadow what is to come. 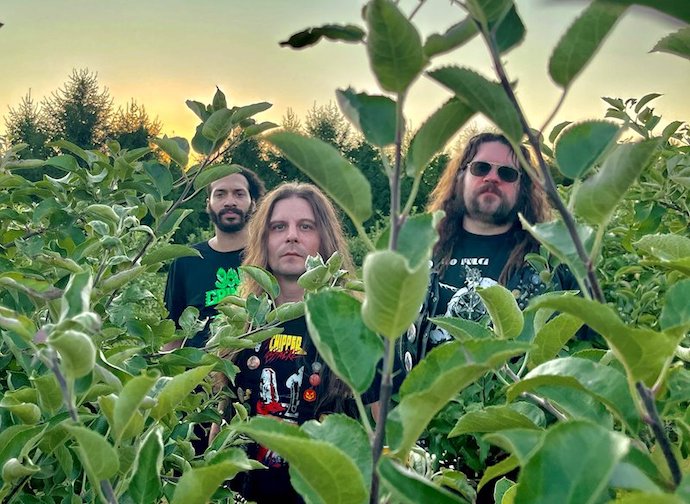 What came next was these guys rocking the fuck out in the powerful title track. They have come with the goddamn riffs . My golden rule is… cool riffs alone does not a good song make. Not only do they have the riffs but they have strung them together with hooky finesse.

While at their heart they’re a death metal band, a sludge-ridden edge empowers the wall of guitars that is “The Sleeper”. Very deliberate in their attack, at times they could be defined more as death-doom when the drone of  “Psychedeathic Swampnosis” invokes a lumbering Sabbath-flavored shuffle. They have not forsaken the more overt death metal aggression, which can be heard on the darker grind of “Devil’s Night Doom”.

Horror-tinged urban folklore is a much-loved subject of this band’s lyrics and the tradition remains intact with “5508 Martin St”. The song is about the dreaded Detroit Demon or a hag said to haunt this address. This is where the album makes a descent into darker and heavier intensity, which works perfect for me. They solidify the fact this is a death metal album with the more driving chug of “Evil Dad”. Granted, this song has more Halloween-themed sounds to balance out the overt heaviness. But they continue to prove they are just as capable a death metal as their less spooky peers. “Tommyrotters” follows in more of a death-doom direction with plenty of atmosphere.

There are some signs that you cannot resist the urge to headbang to, even when seated typing at your computer. “Chelsea Didn’t Come Home Last Night” is one of those songs that is hard not to nod your head to its deliberate chug. There is an expand-and-retract tension to the dynamics that proves you can still be heavy and have nuanced songwriting. They saved the heaviest song for last (“Gundella the Green Witch”) and still pull out all the Halloween decorations for it.

If you are already a fan of the band, while there might not be as much focus on their worship of the witching weed on here and they have totally given in to the darkness, the overall vibe here is one that should make you rejoice. This band once again prove that death metal can be fun if it is dark and spooky enough, if you have the power to write rippers like these. This is everything I wanted, and just what I needed. Once again in the face of adversity metal is there for me.