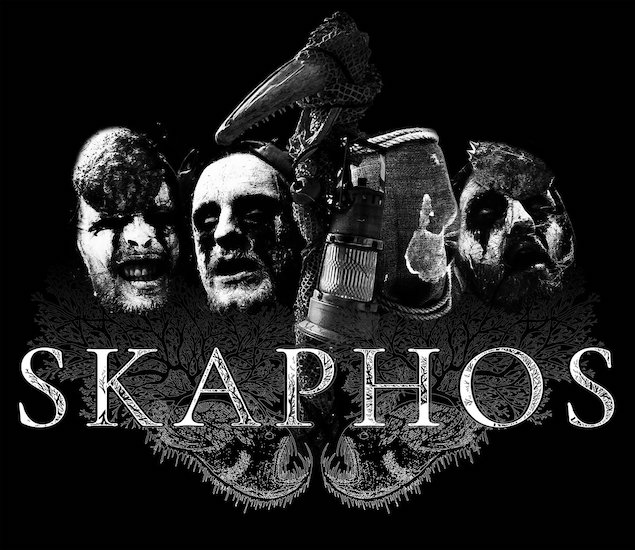 Last weekend I was able to compile and write about a typhoon of new songs and videos, but this weekend will be different. The Seattle Mariners baseball club made the major league playoffs for the first time in 21 years, and won the first game of their first playoff series yesterday in Toronto. The second game is this afternoon, and I’ll be glued to the TV watching that with friends.

Afterward will be a dinner party in Seattle that will likely go late, and that won’t bode well for Sunday morning work on Shades of Black whenever I get back to my island home. Also ominous is the fact that I’ve got to do shit for my fucking day job tomorrow, which makes tomorrow’s usual column even more unlikely. So don’t be surprised if I have to skip it this week.

I’ve got to make my way to Seattle pretty soon for that ballgame, so I’ll have to make the following collection short, but hopefully sweet. I wish I could have done more, and really wish I could have done it yesterday when there was an extra incentive for fans to spend money on Bandcamp, but my job hammered me then too. So it goes. 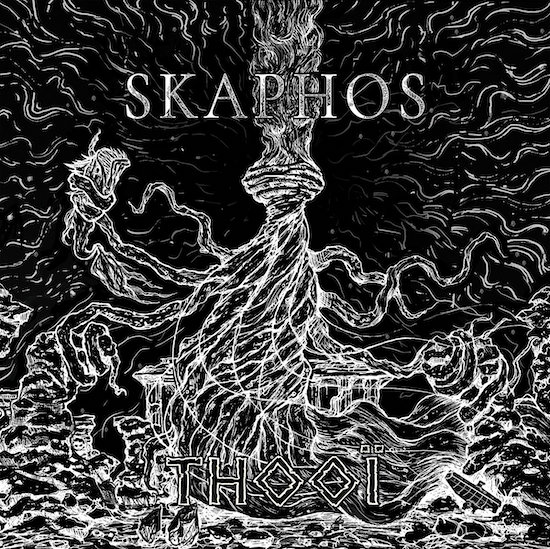 In early 2020 Skaphos released their wonderful debut album Bathyscaphe, which was promoted with some great videos (I think I wrote about all of them). They released a second album named Thooï last May, and it came at a time when I just wasn’t able to give it proper attention. This morning I discovered a short film they released in August, written and directed by Jérémy Tronyo, for a composition called “La Litanie des Flots” which reminded me of my oversight of Thooï.

In keeping with the band’s maritime themes, the film depicts a one-eyed man swirling a snifter in his darkened home and perhaps reflecting on events of his past, accompanied by beguiling acoustic guitar melody. And then the video shows us what he is remembering. Imprisoned below deck on a rocking old ship with mostly empty bottles and rats for companions (one of whom he suddenly destroys), the man discovers a sinister relic in a small chest, and from there things get increasingly nightmarish — in both the past and the present.

The composition in the video, “La Litanie des Flots“, doesn’t appear on the track list of Thooï, and it does seem to have been created as the original soundtrack for the video. It isn’t really a song but an audio nightmare, though in time it does begin to hammer and roar, to swirl and ring. It led me to listen to a couple of tracks on the latest Skaphos album, and damn me, I should have paid more attention sooner. 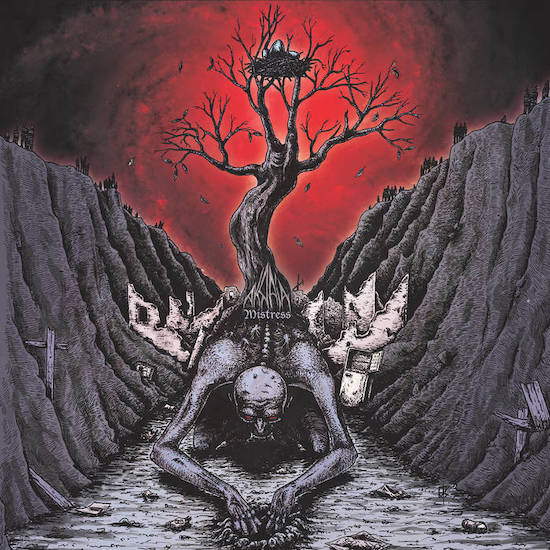 For my second selection today I chose another song that’s also nightmarish. Entitled “Grief (Pt. II)“, it does include a big rumbling and ritualistic beat, but the guitar quivers in an unsettling way, and the vocals sound like the ravings of a famished demon. The throbbing and undulating bass grooves get their hooks in, and the drumming is compulsive, but the miasma of surrounding tones creates a scary supernatural effect.

“Abyssal Black Doom” is how this duo (who are also the two men behind Kavrila) label this music. The song is from their debut EP (or it may be an album) Mistress, which is set for release on November 11th. In February of this year they also released a demo named Tartarus​/​Persephone, which is also available at their Bandcamp page, and two of the tracks there also appear to be included on this newer release. 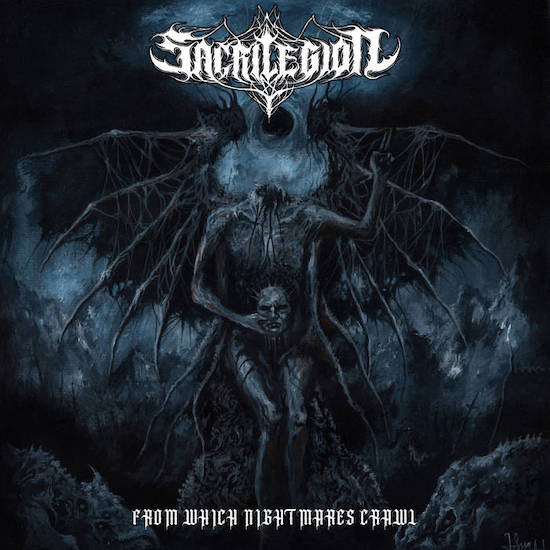 Since we’ve already ventured into musical nightmare worlds, I decided we ought to stay there, and thus selected a song from a forthcoming debut album named From Which Nightmares Crawl.

This song, “Tainting the Sky With Red“, pulls together manic riffing, thunderous bass lines, neck-smacking drumwork, ravenous howls, and demented screams to create a gut-rumbling but nerve-wracking experience. It stops and starts with abandon, kicks the drumming into blasts, and creates numerous twists and turns in the rhythms and the fretwork. Altogether it’s a crazed and dervish-like escapade, but it still manages to be catchy and it will get your adrenaline flowing too.

Salt Lake City’s Sacrilegion began as a solo project for Connor G. Carlson (Delusions of Godhood, Unceremonial), but he was later joined by guitarist Geronimo Santa Cruz, bassist Alex Seolas (Tomb of Belial), and drummer Ashton J. Childs (ex-Onethium). From Which Nightmares Crawl will be released by Mexico’s Chaos Records on December 9th. 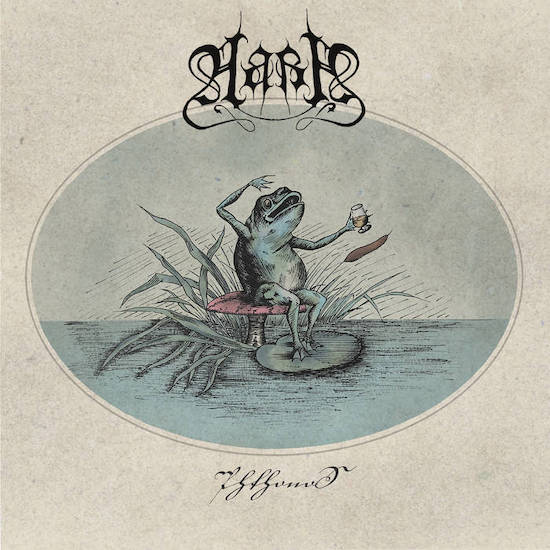 To close this all-too-brief roundup I recommend you give a listen to a new two-song EP (Phthonos) released yesterday by Debemur Morti and the Swiss band Aara.

You may know that last May Debemur Morti released a damned good new Aara album named Triade II: Hemera, and so how does this new EP fit into Aara‘s plans? Well, let me take the liberty of quoting the info that appears on the Bandcamp page for the EP:

Created separately to the ongoing Melmoth album trilogy, the 2 new tracks which comprise this EP originate from the prolific Swiss band’s desire to try out a slightly different approach to Black Metal without disturbing the coherence of the three-part Triade.

Phthonos is the first time AARA have worked with an outside producer, and the mixing/mastering by Markus Stock (ALCEST, EMPYRIUM, SCHAMMASCH) has bolstered the clarity, textural heft, focus and power of what is a compulsive one-two of contemporary melodic Black Metal.

In Greek mythology Phthonos is son of the goddess Nyx and the personification of envy and ill will. Conceptually the EP deals with the negative emotions and darker characteristics of beings, the lyrics originating from two of Aesop’s fables, in which the frog appears as an envious, loudmouthed and malevolent naïf as portrayed on the distinctive cover artwork.

Interesting stuff, yes? So are the two songs.”Phthonos I” is a racing blaze of sound so glorious and electrifying that it should make hearts swell, and the ringing lead-guitar melodies are powerfully alluring. But it also takes us on some dark and disturbing digressions, and even the blaze begins to sound distraught.

The elegant but haunting guitar harmony that launches “Phthonos I” creates a sudden contrast, but soon enough the power swells, and a storm breaks open. This song also includes alluring and memorable (but moody) melodies (some of them soft and sublime) as well as some startling, grand chords and bounding beats, but the overarching atmosphere is one of madness and fear, peril and pain — right up until this song also blazes and soars.

Both songs are very good, and should also insistently point you back to Triade II: Hemera in case you missed it. (Thanks to Miloš for the link to this, before I glimpsed my Bandcamp alert.)