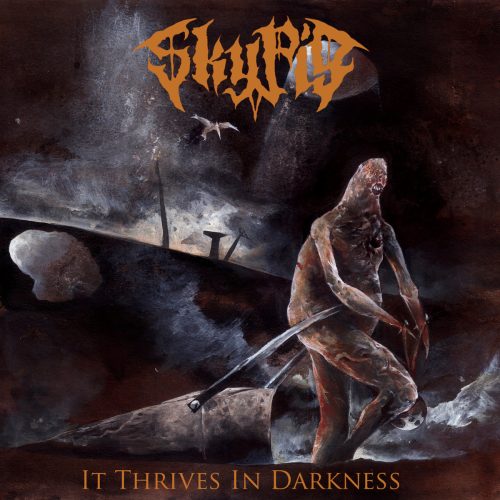 No, really, it wasn’t. It was DGR who originally put out the call for the promo for this album but, due to a series of increasingly embarrassing blunders and comedic mix-ups behind the scenes it’s me who’s ended up writing about it.

But I’m glad it did, because otherwise I might not have taken the time to properly appreciate just how good this album is.

It doesn’t take long – about 30 seconds – for “State of Anger” to clue you into the band’s vibe on this album.

Whereas they’ve previously been referred to (not inaccurately, I might add) as “Stoner Doom”, the opening song’s lurching riffs, howling vocals and heaving, hypnotic rhythms are indicative of a significant shift towards the darker, sludgier side of things, with the final product sitting somewhere between early Yob/Mastodon and latter-day Lord Mantis/Phantom Winter when all is said and done.

That’s not to say they’ve entirely dropped the psychedelic, stoner-y elements entirely by any means -“Larva” practically simmers with acid-laced ambience beneath all the gargantuan, groaning guitars, while the bombastic back-and-forth between sinister, occult atmospherics and stomping metallic riffage that makes up the inaccurately-named “Motionless” gives off some major “bad trip” vibes – but there’s no question that whatever they were smoking during the writing and recording of this album must have been cut with something much nastier than usual.

Why else would the cataclysmic climax of “Sinning Time” hit with such visceral, violent fury? What else could cause those sudden spasms of apoplectic fury and asphyxiating anxiety during the moody come-down of “In Light of Your Death”? And how else do you explain the pure, unadulterated nihilism which fuels the tormented title-track (sample lyric: “This house of pain / is where I stay / no love, no light / turns blood to rot“)?

Seriously, whatever these guys have got in their stash, I hope they keep it to themselves. Both because it’s turned them into a real monster of a band… and because I’m afraid of what might happen if it gets out into the world.