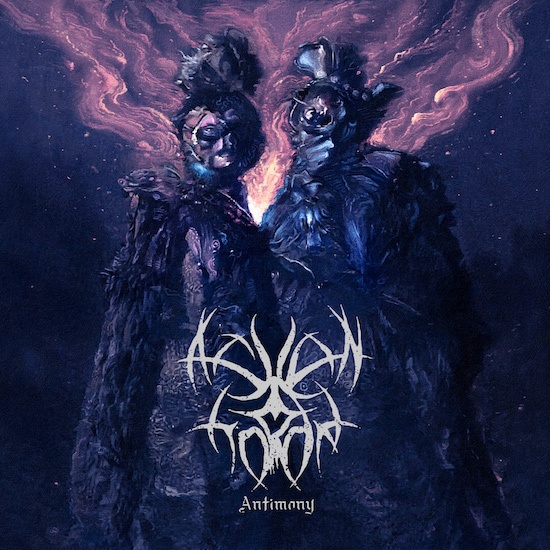 For those who might be encountering Ashen Horde for the first time or just need a reminder, it began as the solo project of Los Angeles-based musician Trevor Portz. Working alone, he released a handful of EPs and two albums starting in 2013. Beginning with The Alchemist, a 2017 EP, he joined forces with vocalist Stevie Boiser, known for his work with such tech-death heavyweights as Vale of Pnath, Inferi, and Equipoise, and both were in harness again for their third album, 2019’s Fallen Cathedrals.

Over the course of all the releases mentioned above, Ashen Horde have demonstrated an adventurous spirit, with an ever-evolving amalgam of genre influences and no real interest in boxing themselves in. Take, for example, the absolutely exhilarating (and riotously deranged) song from Antimony that we’re premiering today along with a nightmarish video. Moving at a near-relentless pace, “The Physician” blends together (at puree speeds) technical death metal, black metal, and flares of prog, with breathtaking results.

Sheer guitar frenzy interspersed with jolting bursts immediately injects the song with pure adrenaline and weaponized insanity. That opening motif becomes the chaotic hook that holds the song together. In between its appearances Ashen Horde provide more twists and turns than a climbing, chasm-hugging mountain road being traveled at dangerously high speeds, while also throwing in more and more hooks (thoroughly crazed hooks, to be sure).

As the rhythm section race us through their own mind-boggling and bone-smashing gauntlet, the guitars viciously seethe, brazenly blare, seductively swirl, maniacally skitter, deliriously dart about, and deliver pulse-pounding jackhammer jolts. The tandem of roaring and screaming vocals, which join together to create epiphanies of blood-lusting lunacy, are a perfect match for the rampant chaos of what’s happening around them in the song.

As you’ll soon discover, the frenetic video is just as insane and maybe even more terrorizing than the music. A multitude of horrifying images rapidly flash from the screen, and it’s probably for the best that we can’t completely take in too much of each instance, though it’s clear enough that the song’s protagonist is a ghoulish monster.

Transcending Obscurity plans to announce pre-order opportunities for Antimony in the first week of November. Keep an eye on the links below for that announcement.

We’re also including a stream of “Throes of Agony“, song from the album which first appeared on Transcending Obscurity‘s 2021 Label Sampler.