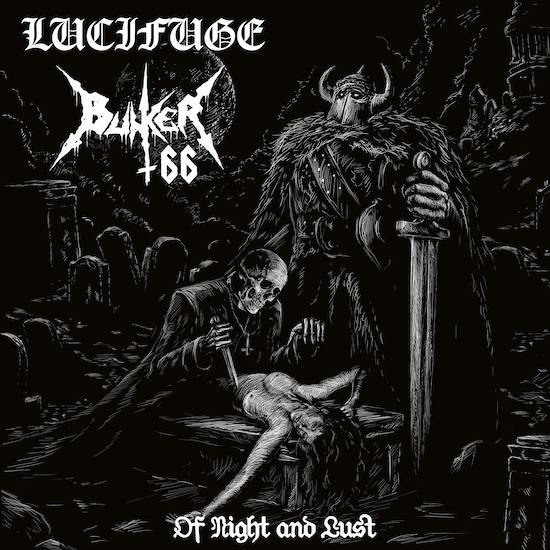 It’s our fiendish pleasure today to present the premiere stream of a new split mini-album by the Italy’s Bunker 66 and Germany’s Lucifuge. Aptly etitled Of Night and Lust, it combines three exclusive tracks by each band, and it will be discharged on October 21st via Dying Victims Productions.

The press materials for the split brand it as “24 minutes of ancient speed metal sleaze and metalpunk ghoulishness”, and that’s true, but there’s a lot more going on here, the kind of music that will get heads spinning as well as hammering. Feral lust does indeed live in the music, but there’s hellish magic as well, and fiery glory. And like most excellent splits, the music of the two bands shares a kindred spirit, but with differences that contrast with, as well as complement, each other. 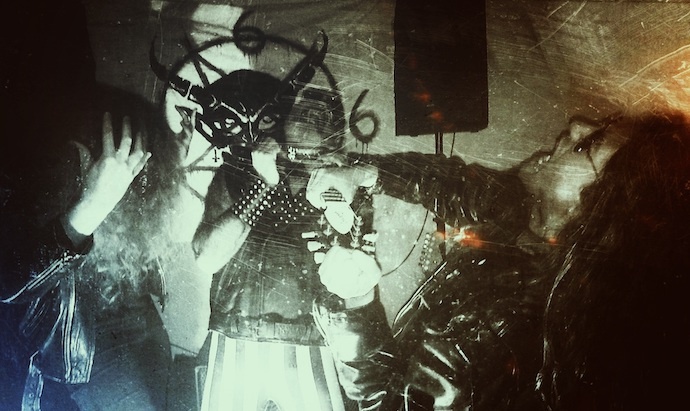 Bunker 66 open the split with two original tracks of their own — “Mellhammer” and “Sulphurous Lust” — followed by their cover of Motörhead’s “Doctor Rock”.

With “Mellhammer” Bunker 66 kick the door down with an immediate flurry of skittering and writhing riffage, bubbling bass tones, and galloping beats, but seamlessly turn the music in more sinister and dismal directions just as teeth-bared lycanthropic howls come in. The riffing takes a vicious turn too, and the beats get even more punk-ish, and aromas of the supernatural waft up from a weird and warlock solo.

That first song is a fine example of the band’s penchant for dynamism, and for packing a lot of sensations into a relatively brief song. They do it again with “Sulphurous Lust”, which does indeed sound carnal, as well as carnivorous. There’s demonic delirium in the riffing and sheer hostility in the vocals. The extended soloing is a display of ecstatic revelry and black magic, and the song also brings in grand blaring chords that create a feeling of hellish majesty. It will give your neck a good workout too.

Damien Thorne‘s vocals on “Doctor Rock” would make Lemmy proud (Thorne really does sound like a twin of the late legend), and the rendition of the song by the whole band would make him smile. It’s largely a faithful cover, though Bunker 66 charge it up with even more accelerated energy when they jam their feet on the pedal. 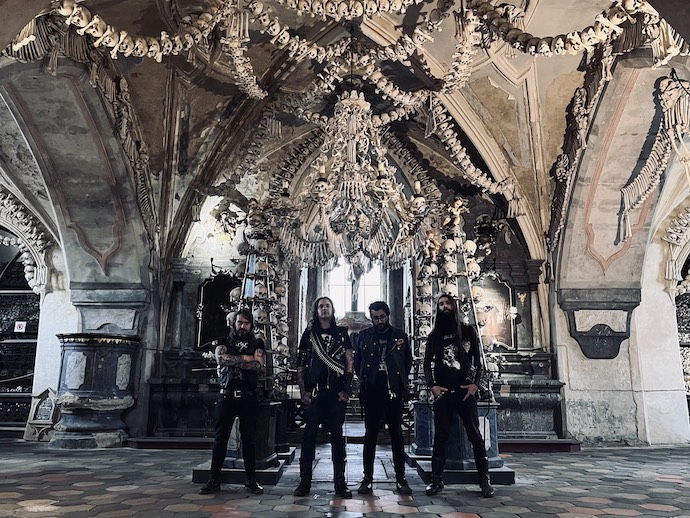 Bunker 66 is a tough act to follow, but Lucifuge are up to the task with their three songs. “In Blood and Dust” is quickly exhilarating, revealing this project’s more blackened take on speed-metalpunk, but the song is also an exercise in guitar sorcery, with the quivering, darting, and swirling notes weaving an infernal spell as the vocals vent ghastly mayhem and the drums change gears with no warning. And as if the guitar work weren’t already eye-popping, the solo creates an even bigger spectacle — though the song becomes a rendition of dismal misery at the end.

The guitar work blazes again in “The Great Unseen”, this time creating sensations of hellfire magnificence and unbounded ecstasy. There are big hooks in this song, along with a ton of fleet-fingered fretwork exuberance — and this time there’s no room for taking any deep breaths.

The last of the Lucifuge songs, “Warriors of the Night“, is justly heralded in the PR materials as a storming anthem that suits the song’s title. The vocals are as barbaric as ever, but the music is fucking glorious, the kind of thing that would get a packed crowd hoisting their clawed hands to the heavens, and the soloing here is a spinning dervish lost in a kind of possessed joy.

Dying Victims will release this fantastic split on both black and special-edition bone-colored vinyl; both variants come with download codes as well as an insert, poster, sticker, and post-card, and there’s a woven patch that also comes with the special-edition. The label will also release the record in an MCD edition with a sticker, as well as digitally.