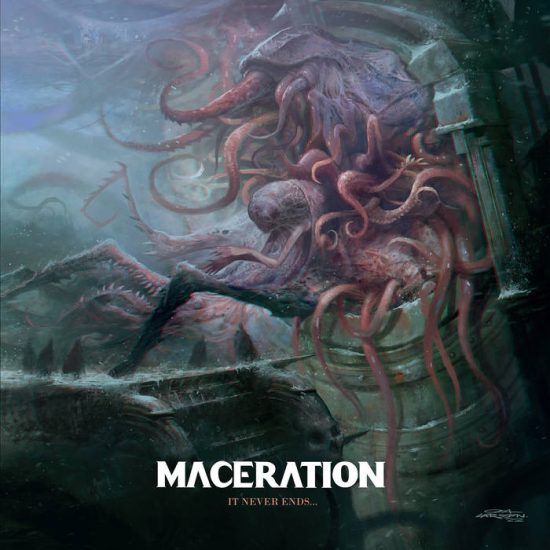 One month ago we were floored to discover a new single by the Danish death metal band Maceration, their first new music since the band’s first and only album (until now), 1992’s A Serenade of Agony. We hope you’ll forgive us repeating some of what we wrote last month, little knowing that we would have the opportunity today to help present another new single in advance of a new Maceration album’s release on November 25th via Emanzipation Productions.

In a time when metal re-births seem increasingly common, the resurrection of Maceration still seems worth an extra measure of attention, in part because for their new album It Never Ends… Dan Swanö has again stepped in to fill the session vocal role, as he did under the name Day Disyraa for Maceration‘s first album 30 years ago. Original guitarists Jakob Schultz and Lars Bangsholt are also back, together with bassist Robert Tengs and drummer Rasmus Schmidt (Illdisposed, ex-Myrkur). 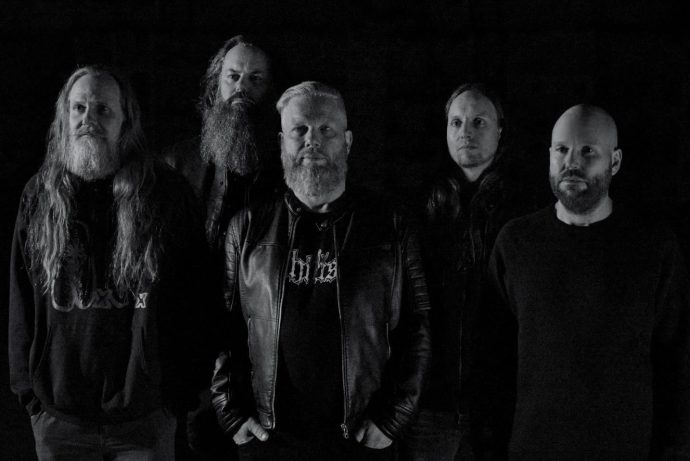 Given that three decades have passed between full-lengths, it’s no wonder that the first single from Maceration‘s come-back album was named “Epiphany of the Past“, but that first single from the album is a grim and gruesome memory. The heaving chords are dire and dismal at first, and then there’s a convulsion of circle-saw riffing and bullet-spitting percussion. The music still sounds like illness, but it’s a disease spreading at the pace of contagion.

The voracious growls and ravenous howls of Dan Swanö (who plays a central role in the accompanying video, along with lots of macabre imagery) add to the fear factor of these traumatic audio visions. He apparently hasn’t done growled vocals since the Edge of Sanity days, but you couldn’t guess that from his performance here. On top of that, you get a freakishly weird and warping solo to go along with guitars that sound like a huge mass of squirming and feeding maggots, or alternately like a gouging and grinding demolition machine.

In short, no self-respecting fan of old school chainsawing death metal is going to turn their nose up at this thrilling horror-show:

And now we come to today’s song premiere. On that first song Maceration already sounded “lost in depravity”, so what do they sound like on a song that actually has that title?

At first, it’s not what you would expect. After the non-stop ruination inflicted by “Epiphany…” the haunting piano melody that begins this new one creates a stark contrast. Even when the full band arrive, the mid-paced music is more steeped in oppressiveness and agony than riotous mayhem.

But don’t worry, there’s madness in the music as well, and it escapes the confines of sanity when a quivering solo leads into galloping drums and dense chainsaw riffage that grinds and roils with increasing lunatic energy. Dan Swanö‘s vocals are again monstrous, but intelligibly articulate, and there’s a temptation to roar the song’s title refrain right along with him.

It must also be said that there’s an atmosphere of vast, hideous majesty that rises up within this song whenever the band circle back to that grim opening sequence, augmented by something like the sound of celestial voices crying out in fear. It’s like a grand anthem to shattered minds.

The central figure in the video that accompanies this song is a different one, a woman portrayed by actress Maria Hell who is beset by her own demons. It seems that it’s her madness and despair we’re experiencing as we listen.

And so we now have two reasons for fans of ghastly old-school Swedish-style death to get excited about It Never Ends…. It was produced, mixed, and mastered by Mr. Swanö, and to repeat, it’s set for release by Emanzipation Productions on November 25th. The fantastically grotesque cover art was made by the great Ola Larsson. Credit for production of the video goes to Jakob Schultz.

This newest song is available as a digital single, and the album is also now available for pre-save and pre-order — so get in line!

One Response to “AN NCS VIDEO PREMIERE: MACERATION — “LOST IN DEPRAVITY””