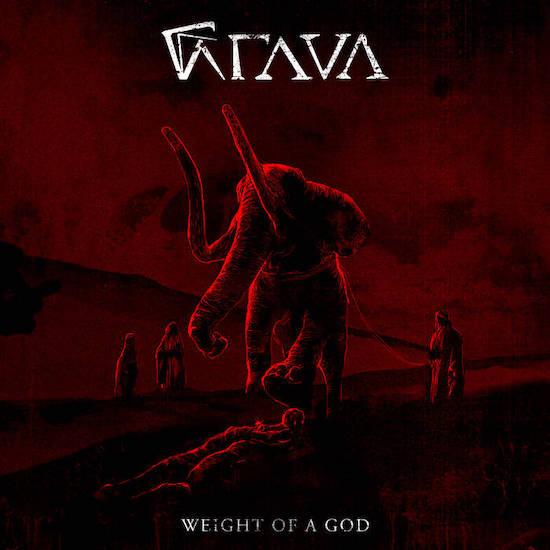 The cover art for the Danish band Grava‘s debut album Weight of A God is the kind of thing that immediately seizes attention and is not soon forgotten. Bathed in a deep apocalyptic red, but also dark as night, the image of an enormous bull elephant about to crush a prone form as cloaked figures dispassionately gaze upon the scene is striking. It’s also a visual match for the crushing music and the album’s utterly bleak conception. To quote from the press materials:

Lyrically, the band portrays scenes of death through the eyes of the dying, unearthed from the great tomes of history. Here you’ll encounter the final moments of shipwrecked men as
the icy waves fill their lungs and drag them to the deep (“WAVES”) and the howls of the 6000 crucified slaves that stood up to the power of the Roman Empire and lost (“APPIAN WAY”) or the unfortunate prisoner who was trampled to death by a work elephant in the East Asia of yore (“CRUSHER“).

While the cover image may correlate most directly to the song “Crusher”, it’s also a representation of the album’s themes as a whole, and connects even to the album’s title. 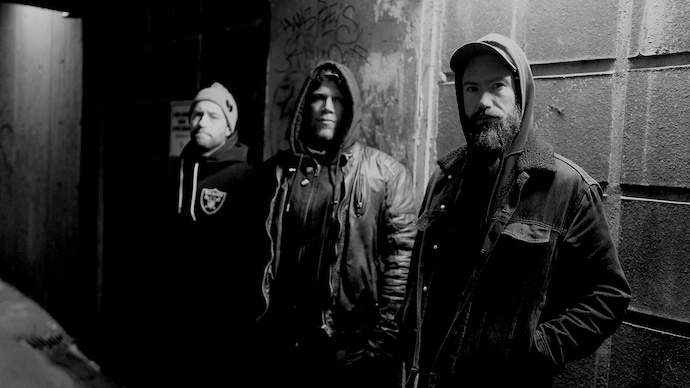 Weight of A God is uncomfortable to hear. The emotion is raw, the effect is unnerving. As the band explain:

“Weight of a God is our debut album. It was the very first time we went into a studio together. We recorded it over three days in a live setup and we tried to keep the raw live-feeling throughout the mixing which was done by our friend Troels Damgaard Holm. Every song on the album is an attempt to portray a human being’s meeting with death, seen through their eyes at the last moment. The resulting music and lyrics have been expressive, fragmented and painful and you will find no complete narrative in the lyrics or musical structure, only the bits and pieces of the world as seen through the eyes of the dying.”

One of those harrowing narratives is the subject of “Alight“, the song from the album we’re premiering today. The principal dictionary definition of “alight” refers to the act of descending to the ground from some means of transport, or of descending from the air like a bird and coming to rest. But that’s not how Grava mean it here. Regarding this song, the band have stated:

“In the case of “Alight” we were inspired by the story of a woman burnt at the stake for heresy, and the song is a sort of strange dialogue between the inquisitor and the condemned woman. As she is engulfed by the flames she curses her tormentors and the onlooking crowd who answer her in turn by proclamations of justice and punishment.” 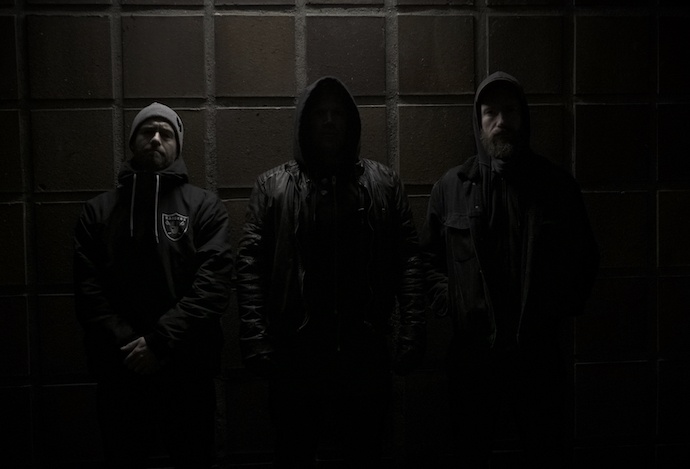 The slow, heaving chords that open “Alight” are brutally distorted and scarring to the senses, immediately establishing a cold and dismal mood. But the music also becomes more violent, striking like a gargantuan pile-driver through punishing drum-blows and massive, jolting riffage, interspersed with fretwork that generates braying moans.

These sensations are vast in their scale and stupefying in their heaviness, and the howls and screams in the vocal department are equally harrowing in their own way — it’s easy to imagine them as the torment and agony of someone being burned alive.

Grava have previously released three other songs from the new album, including two mentioned above — “Cauldron“, “Waves“, and “Crusher“. You’ll find all three of them as singles at the Grava Bandcamp page, and they are well worth your time.

Weight of A God is set for release on November 28th, both digitally and on CD through Aesthetic Death. LP and MC versions will be released through the Danish label Vinyl Troll.

That cover art was rendered by Johannes Larsen.