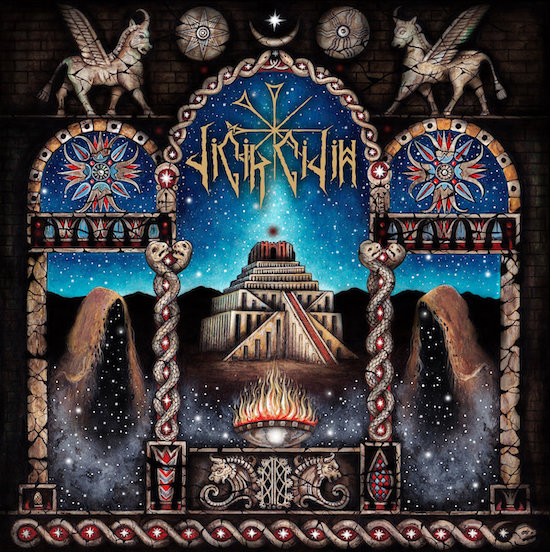 The mysterious Italian duo Diĝir Gidim made their recording debut five years ago, bursting out of nowhere via the ATMF label with an album named I Thought There Was the Sun Awaiting My Awakening. Lacking any precedent for it, I was taken by surprise. As I wrote at the time when we premiered it, what I heard left me gasping and unnerved, emotionally stretched taut, and wide-eyed in wonder at what these two had achieved. I felt myself enthralled by the unsettling sorcery of masters practicing a very dark but transportive art.

Thinking back on that album now, I’m not shocked that it took five years for Diĝir Gidim to return. That previous record was astonishing in its complexity, in the care and ingenuity of its conception and execution, and in the deep and unpredictable emotional effects it produced. As I again wrote then, it resembled a musical odyssey, or the unfolding of an arcane pageant, or the sound of a labyrinthine ritual within a cosmic ziggurat — not an easy trip, not an experience that was intended to comfort listeners but one designed to up-end their view of reality.

And so, that it would take them this long to create a follow-up is unsurprising. I’m just very glad that they did it. 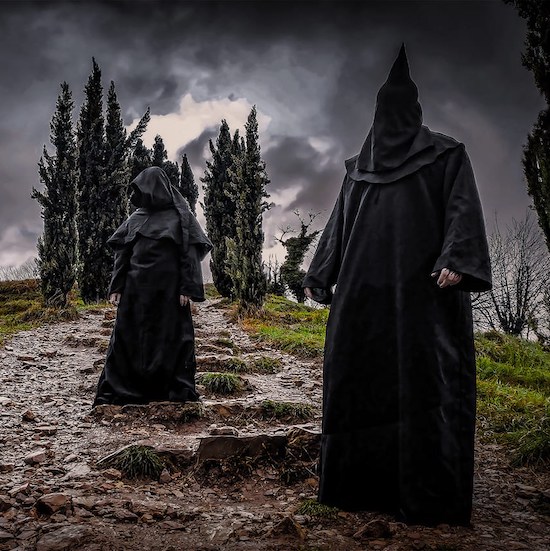 The name of the new one, which the same ATMF will release on November 18th, is even longer than that of its predecessor: The Celestial Macrocosmic Scale and The Shimmering Path of the Supreme Regulator. It consists of four long tracks almost identical in duration and identified only by Roman numerals. Collectively they create an epic 45-minute trip.

Unlike this album’s title, Roman numerals don’t have personality. They are an ordering mechanism but don’t point the way to what you will hear. But oh, do these songs have personality! ATMF‘s promotional material provides hints of them:

It’s a voyage with no return, where chosen souls reach the Passage to Divination, a path through the silence of oceans and deserts, detaching themselves from humanity, assuming transparency and the celestial shimmering moving to the ultimate sacrifice, surrendering to the merciless embrace of the Supreme Regulator.

That’s a suggestive map of the album’s trip, but there’s really too much going on in each track to succinctly sum up the segment of the journey that any one of them represents. However, there might be a temptation, based solely on the music, to portray Part I as the opening of a window into a frightening yet also inspiring vision on a vast scale; to encapsulate Part II as the mad running of a violent gauntlet, and a staggering in pain toward blazing towers of daunting grandeur; Part III as a severe trying of the soul, where surrender is hard to resist but the primordial will to fight becomes resurgent, and melancholy merges with splendor; and Part IV as a final ruinous calamity, where the allure of celestial splendor is revealed to be something very different from what was beckoning — here is the terror where the shimmering path was leading all along.

But that’s just one listener’s imagination. The actual tale is again rooted in the band’s interests in Sumerian mythology, and thus encompasses the tumult among gods, the creation of the world and the stars, the downfall of humankind, and much else.

In more prosaic terms, Diĝir Gidim bring to bear a range of sensations as they go — all-consuming waves of searing and submersive tremolo’d guitar and towering synths; coupled with torrential drumming, maniacal leads, rasping screams, and harrowing roars; but also crashing bell-like chimes, magnificent orchestral swaths that paint lush panoramas, and singing that’s stately and also soars in reverent passion; as well as grim raking riffage, vivid changes in drum rhythms, sounds of thunder and lightning; and a hell of a lot more.

Dissonance and discord were hallmarks of the band’s first album, and they play significant roles here as well, but (as already forecast) the new album is also marked by passages of breathtaking and often heart-breaking beauty.

The moods are equally far-ranging. Within the vast maw of these multi-faceted sounds are experiences of intense yearning and abject hopelessness, of terrible glory and uncontained derangement, of feral savagery and cold cruelty, of confusion and revelation — and everything seems to be transpiring on an enormous scale that transcends the bounds of Earth and of time.

Once again, Diĝir Gidim have created an elaborate work of great ambition and passion. Once again, it’s not an “easy listen”, because overall it’s so dire and daunting, but few albums this year are this completely powerful and consuming. Prepare to leave the mundane world far behind and press Play on our premiere of the full album:

Credit for the album’s suitably fabulous cover art goes to Luciana Nedelea. ATMF will release The Celestial Macrocosmic Scale and The Shimmering Path of the Supreme Regulator in LP, CD, and digital editions, and all are available for pre-order now.

2 Responses to “AN NCS ALBUM PREMIERE (AND A REVIEW): DIĜIR GIDIM — “THE CELESTIAL MACROCOSMIC SCALE AND THE SHIMMERING PATH OF THE SUPREME REGULATOR””