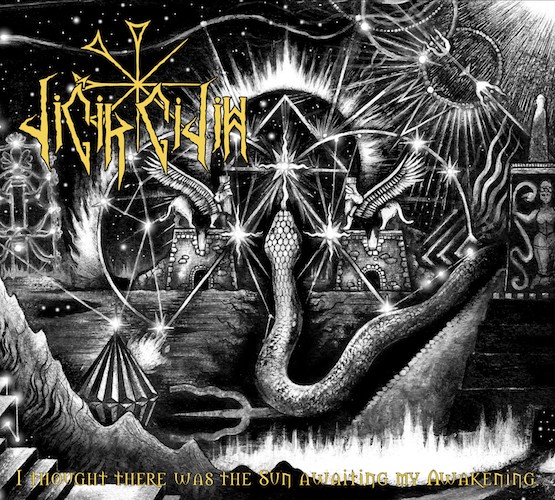 As I’ve mentioned before, we don’t agree to host premieres of music at our site until we have first listened to the music and concluded that it’s worth recommending to you, according to our own twisted tastes. When I began listening to what you’re about to hear, the band’s name was new to me and I had no clear idea what to expect. What I heard left me gasping and unnerved, emotionally stretched taut, and wide-eyed in wonder at what this mysterious duo had achieved. I felt myself enthralled by the unsettling sorcery of masters practicing a very dark but transportive art.

The band is Diĝir Gidim (whose location is unknown), and the title of the album is I Thought There Was the Sun Awaiting My Awakening. It will be released by ATMF on March 31, 2017. 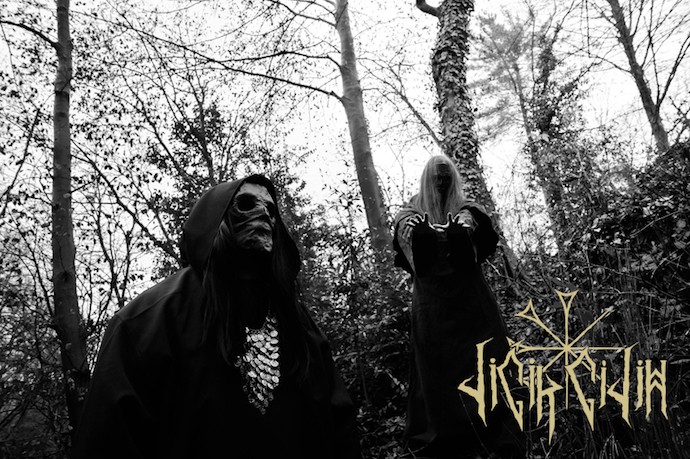 One of the participants in Diĝir Gidim (lyricist/vocalist Lalartu) is also the man behind a solo project called Titaan, whose debut album Kadingir was released by ATMF last year. The other, Utanapištim Ziusudra, composed the music and performed all instruments. I can’t help but wonder what else they have done in other guises, because this new album is vastly more impressive than what one would expect from the first efforts of newcomers.

I Thought… is an intensely strange and fascinating work — astonishing in its complexity, in the care and ingenuity of its conception and execution, and in the deep and unpredictable emotional effects it produces. It resembles a musical odyssey, or the unfolding of an arcane pageant, or the sound of a labyrinthine ritual within a cosmic ziggurat. As a journey through sound, it’s not an easy trip, not an experience that’s intended to comfort the listeners but one designed to up-end their view of reality.

The music is dissonant and discordant, often cacophonous and jarring. In its use of dissonance, in its compositional and instrumental complexity, and in its fierce and disorienting energy, it brings to mind avant-garde black metal in the vein of the more esoteric works of such bands as Blut Aus Nord, Deathspell Omega, or Nightbringer — though comparisons of this album to any other band’s music are imperfect. It stands on its own legs.

The constant swirl of alien and vibrant sounds creates a sense of entering a dream world through a vortex. The music is dense, the guitars layered to create a changing spectrum of sound ranging from bursts of fiery dementia to viper-like slithering to crystalline chiming (and much else). The bubbling bass notes are quite present, adding to the music’s air of intricacy.

The drum performance is gripping, the patterns in constant flux, and the technical proficiency reaching jaw-dropping levels in the music’s crescendos of speed and ecstasy.

While dissonance is dominant, it doesn’t reign absolutely. But the elements of harmonious sound, when they do surface, come mainly through the vocals. Although caustic shrieks and snarls are the main form of vocal expression, melodic voices appear, usually in half-chanted, half-sung ritualistic proclamations.

The most beautiful (though haunting) contribution of these clean voices comes in “The Glow Inside the Shell” (a personal favorite on this fine album), providing a contrast with the unsettling strangeness of the song. The same song also includes some of the most slow-paced passages on a record that’s usually bursting with electricity, as if you’re hearing the accompaniment to a solemn processional flanked by wraiths, the melodies conveying a sense of desolation and soul-stricken bleakness. 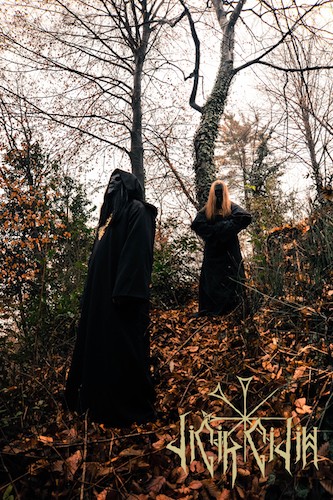 The ritualistic aspects of the music reflect its sources of inspiration, and its extensive poetic lyrics. The four long songs are rooted in ancient Sumerian religion (the band’s two members themselves named after Sumerian gods), with the music itself constructed as a means of dissolving the shackles placed by modernity on the mind and opening portals to transcendence and new spheres of freedom.

As the music itself abundantly reflects, this ritualistic process involves destruction as well as revelation, chaos as well as enlightenment — and a kind of astral communion. All those feelings are in the music. There is a sense of both questing and being chased in a dangerous pursuit, a combination of harrowing darkness and exultant fire.

Well, I guess it’s obvious from my rhetoric that I’ve been carried away by this album. It’s a rare musical marvel — a challenging listen to be sure, but for people with a taste for extravagant and unnerving black metal fueled by obvious passion and performed with impressive skill, it shouldn’t be missed.

I Thought… is adorned by the artwork of the talented Romanian artist Luciana Nedelea. It will be released in a digipack CD edition with a 16-page booklet, limited to 400 copies, and in an LP edition consisting of 140-gram black vinyl in an aqueous semigloss sleeve, accompanied by a 12″ x 12″ insert that includes the lyrics. The total running time is 45:17.

5 Responses to “AN NCS ALBUM PREMIERE (AND A REVIEW): DIGIR GIDIM — “I THOUGHT THERE WAS THE SUN AWAITING MY AWAKENING””