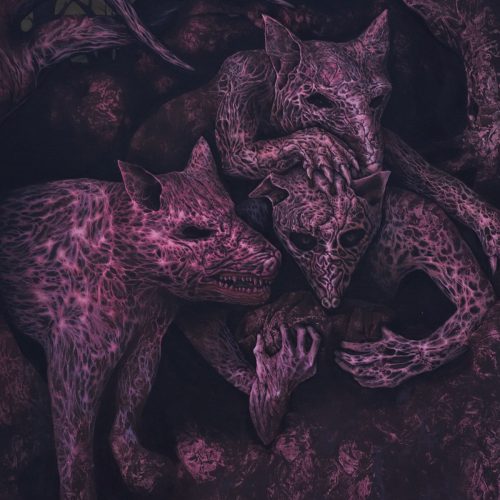 (TheMadIsraeli reviews the new album by the Italian band Lorn, which has just been released by I, Voidhanger Records.)

Black metal has rarely achieved that truly evil, blasphemous, horror sound that many bands have aspired to. It wasn’t until the style took a more melodic, progressive, and esoterically melodic approach that I started to care about it in the early 2000s or so. I don’t like Burzum, Bathory, or Darkthrone. Emperor was where my taste for the music started, and in following suit, all of my favorite black metal comes from that Emperor school of thought… until recently.

I suppose I couldn’t help but feel that first-wave and some second-wave black metal was just rather cartoony or something. I couldn’t take it seriously. I always wanted to hear an album or EP from this genre that truly succeeded in capturing the sound of a pit of hell opening up, or being trapped inside a dank chamber with a bunch of banshees torturing you with non-stop blood-curdling shrieks until you were incapable of knowing peace, sanity, or anything but the endless wail.

Lorn has done that.

Arrayed Claws is one of the most pleasantly and enrapturingly grating, violent, and psychotic black metal albums I’ve heard that aspires to, achieves, and absolutely transcends that early vision from black metal’s inception. I’ve never heard a record that better applies dissonance — memorable, absolutely oppressive and scorching dissonance — this effectively, while mixing in modern black metal’s sense of melancholic melodic tendencies. It’s the sound of a machine breaking down, parts grinding and snapping, the whole thing violently collapsing into a pit of rot, the feeble fragility of mortality and the kind of truly all-consuming horror that we might face in the moments just before our deaths.

This album is the void, the endless, the black. No one exists, nothing begins or ends. It uses an effective combination, a cavernous mix verging on something oppressively mechanical and industrial, bestial vocals that are being suffocated and drowned by the hell-swarm of deathly insects and pungent parasites picking and ripping you apart on the instrumental front, with riffs that reflect a compelling design in terms of the journey they take you on.

Arrayed Claws creates a contrast between melodic sections that serve as something of a reprieve and the primary parts that are oppressively nonsensical and blurred. Melody, music itself, is a construct in some of this record’s passages, and at other times it’s borderline anti-music and feels deliberately designed to be thoroughly unpleasant, but that makes it undeniably compelling.

Lorn accomplish an atmosphere, they set a stage in their music, and the ride they take you on is undeniably existentially excoriating. Combine the fucking distorted wizardry and soul-gnashing lethality of mastermind and composer Radok’s riffs, vocals, and existence-swallowing keyboards and synths with drummer Chimsicrin’s unrelenting death by a thousand bullwhip lashes carpet-bombing strategy, and you have an album that I think is a must-hear, definitive black metal masterwork. These guys get this style on a whole other existential plane than a great many of their peers, and it shows.

Powerful, suffocating, rabid, nihilistic, anti-human, anti-god, anti-life itself, Arrayed Claws is sonic blasphemy at its most meta, its most consuming, and its most morose.