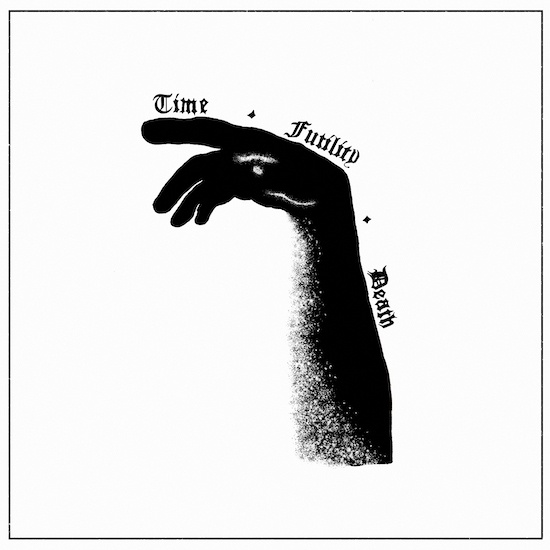 What we have for you now is an enormous surprise, and one we hope you’ll find as wonderful as we have. It’s not as extreme as most of what occupies our attention around here (though it does have its moments of barbarity), but we’ve found it a perpetually eye-popping and captivating record.

The subject is Time, Futility & Death, a new EP by the Swedish group Speglas that will be released on November 18th by Pulverised Records. It follows their first release, another EP, by a very long seven years, long enough that maybe even enthusiastic fans of that first recording may have forgotten the band. The new release will prove a vivid reminder of their talents, and should attract a lot of new adherents among adventurous listeners, if only the word will spread. 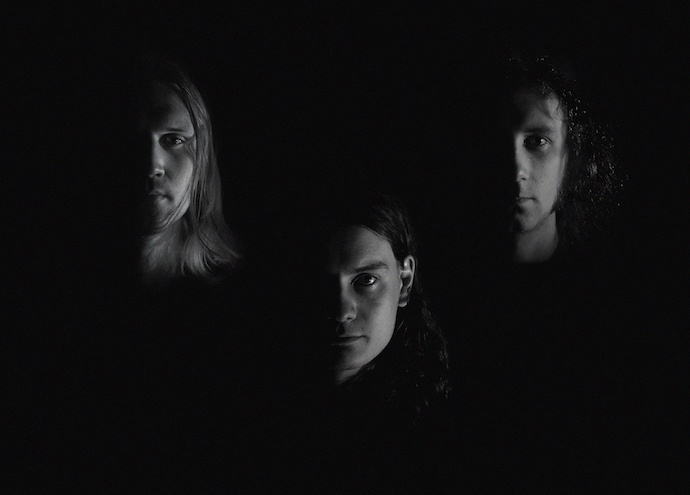 Speglas was new to us when the promo for this EP arrived. But we’ve since learned that it’s the brainchild of Isak Rosemarin, who is currently a member of Sweven along with other bands such as Lethal Steel and Conflagrator, and a former member of Morbus Chron. On this new EP he’s joined by a very talented pair — guitarist Alexi Hedlund (Conflagrator, ex-Gathering) and drummer Jesper Nyrelius (Sweven, ex-Exekutor). What they’ve created together deserves a big round of applause.

The new EP’s opening track “Leap” proves to be a wonderful instrumental introduction. There, a collage of eerie and increasingly disturbing sounds quickly swells… and then vanishes… giving way to a an immediately inviting and mesmerizing acoustic guitar and piano melody that ripples and rings over a deep drone. To complete the picture, the drums bring in a convulsive snap, and soaring synths create a mirage of splendor.

With slashes of abrasive guitar, “Leap” transitions into the hammering and swirling escapade of “Avow”. Augmented by fervently vicious vocals, the ringing and wailing melodies build feelings of sorrow and despair, but the heavy rhythmic punch of the song is convulsive, and a darting riff comes in that creates a vivid pulse. The sorrow doesn’t completely vanish, but a heroic guitar solo, dancing piano keys, and an exhilarating drum performance elevate the mood into one of hopefulness and even joy.

“Avow” is a marvelously multi-faceted song, and its more moderately paced instrumental finale, which is soulful, smoky, and seems flavored with the influence of “cool jazz”, just reinforces that impression.

The one-two punch of those opening songs isn’t just a kaleidoscopic way to begin the EP, but also an experience that quickly creates intrigue about what will come next. Perhaps unsurprisingly, the surprises don’t stop.

Speglas continue to interweave the brightness of the piano, to deliver one head-spinning and body-moving drum performance after another, and to unveil riffs and melodies that lead the listener on a musically and emotionally varied journey. The harsh, throat-ripping and mind-scalding vocals are always intense, and intensity crests in other ways as well, with moments of brazen grandeur that crescendo in electrifying anthemic solos.

On the other side of the spectrum, the rambunctious and hard-rocking rhythms and pulse-pounding riffage also fall away, repeatedly making room for more languid and contemplative passages where the bass and piano shine, and there’s haunted singing to be found in “At the Precipice”, along with the anguished siren-song of the solo there. Moods of melancholy thus do come again, and they go, because the fight in the music isn’t ever really suppressed, and the songs return again and again to visions of seduction and splendor.

The ebb and flow in the EP is ceaseless and occurs across many gradients, not merely those of tempo and volume, and the stylistic ingredients are remarkably varied. This is nowhere more evident than in the stunning EP closer “One Last Midnight”, an unpredictable experience that’s both violent and hypnotic, both distressing and charming, resilient and glorious. At the very end, as the curtain closes on this musical pageant, it also becomes dark and mystical.

Well, we did say that word of this new release needs to be spread, and we’ve certainly just spread a lot of words. But judge for yourselves — here’s the complete EP stream:

Time, Futility & Death was recorded at Studio Humbucker under the direction of Robert Pehrsson (Dead Lord, Death Breath, Carpenter Brut, Under The Church, etc). It was mixed by Robert Andersson (Sweven, ex-Morbus Chron, ex-Temisto, etc) at Tonrummet, and was mastered by Tore Stjerna at Necromorbus Studio (Watain, Funeral Mist, Portrait, etc). The record’s artwork was created by Isak Rosmarin himself.

The EP is being released by Pulverised on CD, MLP, cassette tape, and digital formats, and it comes recommended for fans of Morbus Chron (later), Tribulation (later), and In Solitude (among many possible reference points).

One Response to “AN NCS EP PREMIERE (AND A REVIEW): SPEGLAS — “TIME, FUTILITY & DEATH””