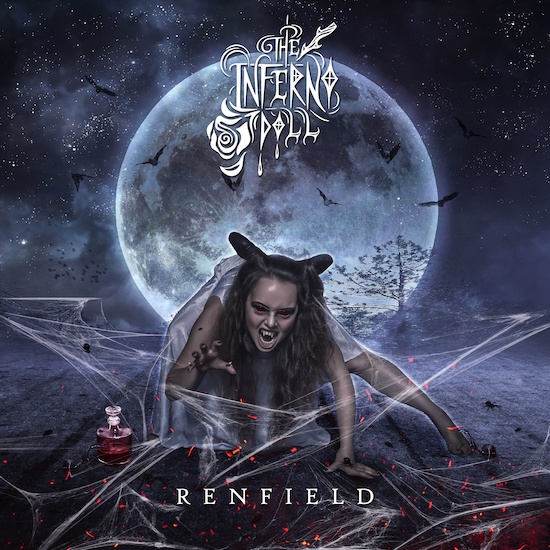 For everyone who’s seen Tod Browning’s 1931 film Dracula, the demented and tormented face of Renfield as portrayed by Dwight Frye is likely one of the most unforgettable images. The character himself, in both Bram Stoker’s novel and that film, is a haunting figure, seduced to the point of madness by the influence of his master and a craving of blood, and ridden by guilt in his momentary moments of lucidity.

Though arguably a minor character in that horrifying tale, Renfield has nevertheless become a source of fascination and inspiration for some artists, one prominent example of which is Barbara Hambly‘s 2006 novel Renfield: Slave of Dracula, which presents some twists on the original tale and some intriguing explanations about the turmoil of his being torn between good and evil.

Calgary-based Laura “Inferno” Vargas is another artist for whom Renfield has become a fascination. Drawing in part on Hambly‘s novel for inspiration, she has used her guise as The Inferno Doll to create a song in his name, which we’re premiering today in advance of its November 18th release as a single, along with a video that presents its own twists. 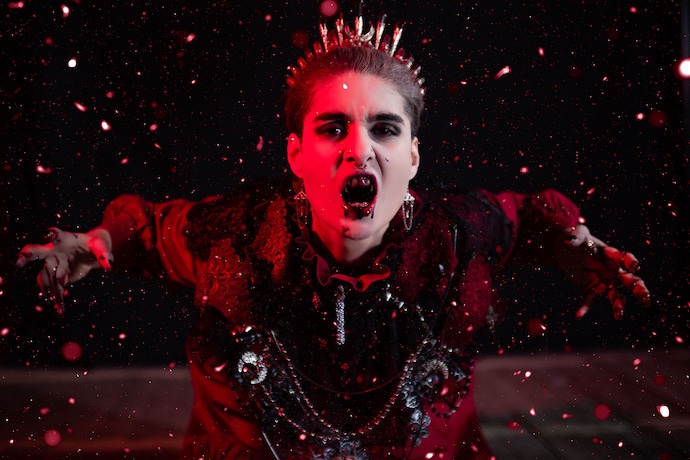 “Of all characters in Dracula, Renfield (in my opinion) is the most underrated and one of my favourites. Renfield lost his mind for serving Dracula’s evil plans. He was a man who in moments of clarity felt guilt for being the one who prepared the way for Dracula to turn Mina into a Vampire. Dracula promised Renfield immortality and he was constantly providing him with insects so he could consume their lives… but in the end, he’s betrayed by his Master.”

In its sounds, this new song itself presents the clash between good and evil, between madness and guilt, and the ultimate triumph of unholy cruelty.

Laura‘s voice is itself vampiric, a vicious demonic howl which rises to screams that’s both chilling and inflamed. The twisted but compulsive riffage, which writhes and chugs, also creates a sinister, menacing, and occult experience, backed by a heavy bass pulse and spine-slugging drum beats. A guitar solo also seizes attention, bringing to life the dementia of the song’s protagonist.

But through all these evil and visceral sensations a bright melody swirls, thanks to Ember Belladonna‘s elegant performance of the glissando flute. It sounds yearning, and maybe even hopeful, but also despairing, and further manages to make the song even more eerie. To add to the contrasts, there’s also a variation in the monstrous nature of the vocals.

This is also a song that gets stuck in the head pretty easily, and an easy one to revisit.

The video was filmed and directed by Erik Labossiere at The Grand Theatre in Indian Head, Saskatchewan, Canada. Credit for the cover art for the single goes to Gogo Melone.

Along with relevant links, we’ve also included the song’s lyrics below.

Under the moonlight sky
Walking down
An empty road
I saw you waving at me
The coldness of the air froze my mind
Somehow, I fell under your spell

Oh, sisters!
Oh, brothers!
Oh, mankind!
I have prepared the way for Lord Evil
I pray night and day
From the depths of my heart
I wish to protect you
From his menacing grip

Poor souls trapped in the dark
And my sorrows burn!
Give me a chance!
Come, drink me
The blood is the life!

Walk into the flames,
Into the gates of Hell
I see through your eyes,
Through the silence of the night.

2 Responses to “AN NCS VIDEO PREMIERE: THE INFERNO DOLL — “RENFIELD””