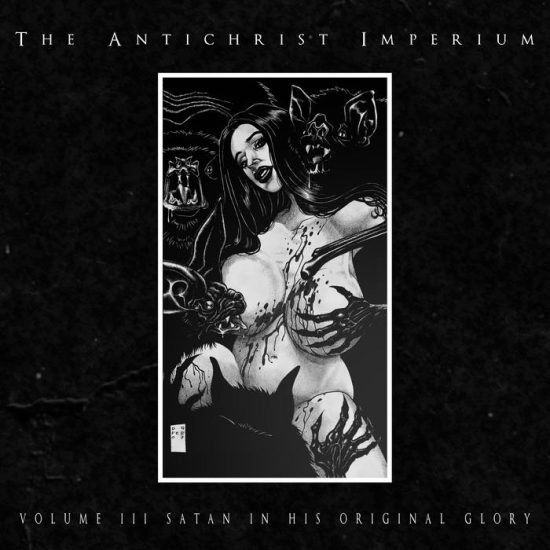 That you have the presence of two of the boulder-punchers from Werewolves in the lineup shows that someone in the band has the mind to attempt some of the most high-minded and far-reaching music and then just as quickly pen some of the dumbest, purposefully one-directional music out there. 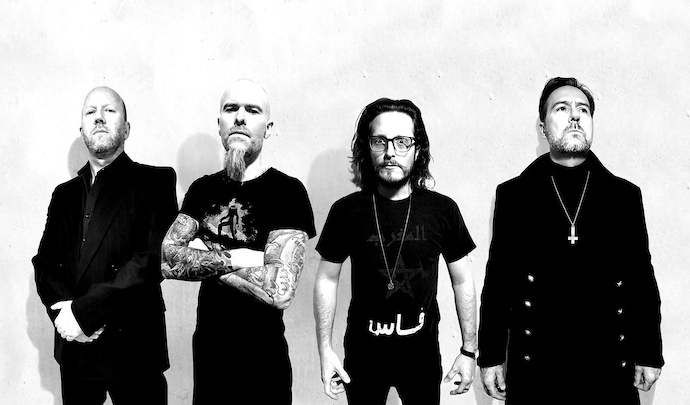 The Antichrist Imperium are artists who have been completely freed of restraint on Vol III: Satan In His Original Glory and have decided that after spending two albums laying out the blueprint for the musical insanity within, they are going to cash in on every opportunity afforded them, resulting in an album that has enough twists and turns that it could qualify as a musical suspense thriller on top of being a metal release that is so appreciably bought into its own bullshit that the inward navel-gazing has them folding into their own pocket dimension.

Vol III: Satan In His Original Glory starts by laying out its bona fides of just how strange a journey it is going to be after you’ve started your first few steps. With only eight songs in its boundaries yet somehow well over fifty-minutes worth of music, you get the sense that the minds behind The Antichrist Imperium are going to be cramming a whole bunch within each of their songs and, as evidenced by “The Sweetest Juice”, playing genre-roulette with the sort of free abandon one might give to the crazed.

Opening with an over seven-minute-long song is a pretty strong statement of the sort of bar you’re trying to set. At the very least it’s hard not to be fascinated by a musical oddity that likes to bounce from movement to movement – acting as The Antichrist Imperium in microcosm – changing and crashing genres together like trying to fuse atoms, and the whole time never quite letting go of the ‘ritual’ aspect that the album is portraying in its early goings.

In fact; the opening moments of “Vilest Of Beasts” that follows, leaning more on a traditional verse-chorus-verse-chorus format, is enough to make it seem like you’ve been through a handful of different songs even though you’re only on the second in a lineup of eight. Of course, then around the three-minute mark The Antichrist Imperium decide to unleash hell for almost six minutes, and turn “Vilest Of Beasts” into one of the heaviest songs on the album when it had previously been fairly easy-going (perspective required here, of course). It again shows that turning-on-a-dime dynamic that this album is built upon.

What then is on offer for those of us for whom time is limited? Keeping in mind that this is an album wherein the shortest song in the tracklist still clears over five minutes, it should be stated that for all the talk of extremely far-reaching and long songs, much of that is packed into the first two on this release. The album gets a little bit more ‘punchy’ as it goes, and if you’re looking for a traditional blast-fest – with a side of oddball – then “Third Degree Baptism”, arriving soon after the hellish volley that is the closing minutes of “Vilest Of Beasts”, will be more than pleasing to the ears.

The swaying heaviness of its follower “Exorcist Evisceration” will keep ears perked as the band drill their way through a heavy block of blackened death metal and let a melodic guitar line float just over the top of it. You can tell that one of the curveballs that Antichrist Imperium repeatedly like to throw is the clean-sung vocal passage, just to remind people where in this conceptual journey you are as a listener. It’s not so much the group throwing up a wall to stop all momentum; it feels more like a hand reaching out of a wall, dragging you into another dimension, and then throwing you back onto your regularly scheduled path with just how quickly the band will drift in and out of differing musical passages.

In continuing the chronicles of ‘weird’, we must mention the start/stop dynamic of a song like “Menage A Triumvirate” closer to the end of the album. After settling into a little bit of a recognizably strange groove with just enough bumps to catch you off-guard, The Antichrist Imperium crank out one of their faster movements within the album and slam a prog-metal sweeping guitar lead into the mix for a song that is blindingly ferocious and teeth-bared way in the back of this release.

If songs were to exist in pairings within this album, “Menage A Triumvirate” would be the one that gets recommended right alongside “Vilest Of Beasts” from earlier on. The two combined are the big, five-and-a-half-minute flamethrowers on the album. The Antichrist Imperium cover a lot of ground within their music and the longer songs especially have a tendency to leap around with musical abandon. The two aforementioned tracks seem to exist partially to add some levity to the mix, so that it isn’t all space-traveling the entire time and there is enough violence to earn the death metal tag as one of its many subgenre-crashing hybrid descriptors.

And yes, it is something of a joy to hear that guitar-shredding continue into closer “Misotheist” as well, as those ‘traditional’ moments purchase the band more and more cachet to drift into whatever post-rock or haunted-prog soundscapes strike their fancy.

Thus we land at the impression that above all else Vol III: Satan In His Original Glory is a weirdly fascinating release. The Antichrist Imperium ram a ton of music into the fifty minutes of time they ask of you here, and a healthy chunk of it is the crushing heaviness that you would expect from a band with the bravery to name themselves “The Antichrist Imperium”. Now three albums deep into their volumes dedicated to Satan, the group’s proclivities have been well demonstrated, but there is a sense that they aren’t scared of trying to go in a bunch of wild new directions, just to throw a few twists and turns into the overall melange.

Sometimes you as a listener may feel like you’re holding on just as much as the band themselves are, but the wild controlled chaos and strange curves are what you come to a release like this for, all of the odd angels and otherworldly dimensions that the band could musically portray. Vol III works both as a full journey and as something where you can break out individualized songs, given how each track is its own small adventure as well, and for each moment of relentless heaviness there is a walk into some off-kilter dimension or a melodic moment of beauty to offset the following death metal guitar shred.

It’s the band combining peaks and valleys into one thing, into whatever strange amorphous musical mass that results in – which feels like a very long way of saying that Vol III: Satan In His Original Glory continues this musical collective’s trend of making releases that are a fine combination of weird and fascinating.

3 Responses to “THE ANTICHRIST IMPERIUM: “VOL. III: SATAN IN HIS ORIGINAL GLORY””