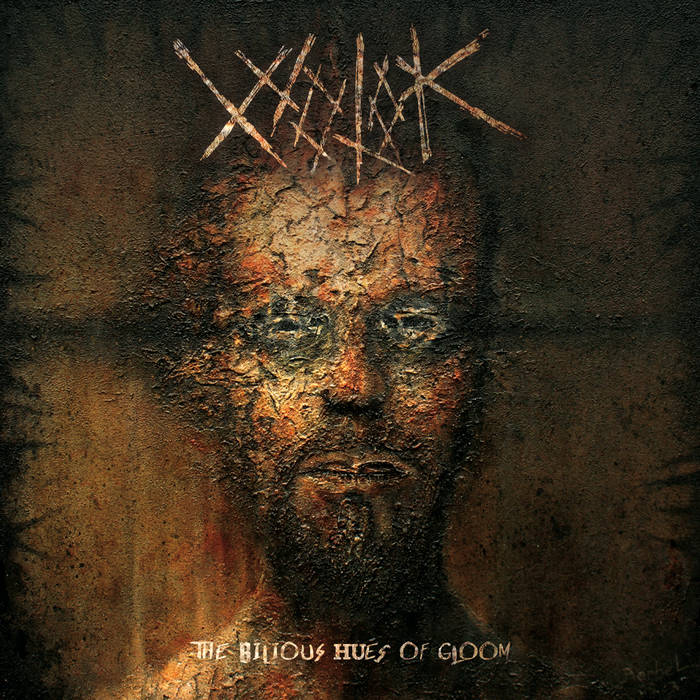 “Can you imagine the raw savagery of early Black Metal mixed with monolithic Death Doom, a pinch of Crust Punk and some spastic Plasma Pool type of EBM all placed inside a jar? Wolok did, they made a molotov of it and they are now ready to throw it at us all and see the world burn”.

That’s a tag-team wrestling match of words from Brucia Records, who will be releasing Wolok‘s new album The Bilious Hues of Gloom on December 8th. It’s a valiant effort at linguistically trying to grapple Wolok‘s music to the mat, as well as a sign of how difficult it is to do that. Brucia also leaps from the turnbuckle with this characterization:

“Too Punk for Black Metal, too Doom for Punk, too Industrial for Doom… deranged, demented and disjointed… bipolarly shifting from majestic to decrepit and back for all of its duration… completely psychotic….” 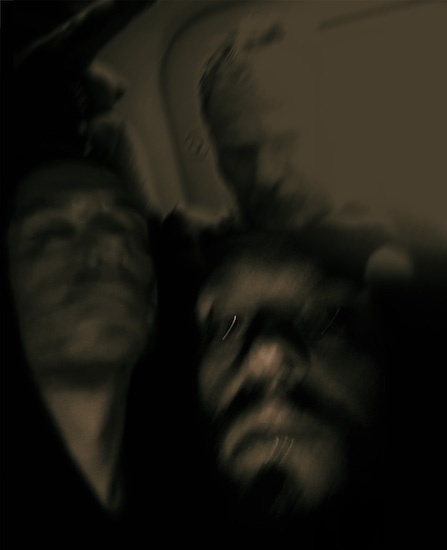 Oh yes, the album really is a whirligig of illness and fear, of frenzy and hallucination — which won’t come as a shock to people who’ve manage to survive a trip through Wolok‘s preceding demos, splits, EPs, and albums. But if you happen to be one of those survivors, you’ll know it’s unlikely these French deviants will run you through the same kind of gauntlet over and over, because they have no fixed blueprint or steady formula, other than (perhaps) to make their listeners as uncomfortable as possible while simultaneously creating surprises and getting the band’s various mangled hooks deep into people’s muscles and heads.

The running of this new gauntlet began with “Downfallen“, the first preview track from The Bilious Hues… It delivers gruesome crocodilian growls and big thudding beats that might make you want to bounce and at other times might make you think you’re dying. Flying all around that is a batch of guitar weirdness that buzzes, pulsates, and skitters, coupled with doses of shrill, quivering electronics. The combined effect is physically convulsive, hallucinatory, and kind of nauseating.

That was the first preview track, but it’s not the track that opens the new album. That honor goes to the song “The Slough of Despond”, which we’re now premiering. Probably best to begin with the band’s own statement about what you will soon hear:

We feel honoured to reveal “The Slough Of Despond” in partnership with No Clean Singing. It is an unusual opening track for us as it does not sound like typical WOLOK at all, and it’s also quite different from the other songs on the new album. I think it’s like… disconcerting for those who have supported WOLOK for a long time. We do not have artistic rules or frames, there is no logic in our approach and each album is different.

“The Slough Of Despond” is about the mediocrity of everyday life for a lot of people here below : regrets, lies, wrong choices, treasons, grudges… it was recorded in sick conditions with out-of-tune guitars.

The world is neither wholly ugly nor wholly beautiful, neither reliably uplifting nor entirely hopeless. It’s a matter of proportions, in uneven balances for different people at different times. When the scales sharply descend into sickening ugliness, that’s usually where Wolok find their inspiration — but “The Slough of Despond” seems more evenly balanced (this is, of course, a relative term).

Wolok seem canny enough to know that forcefully suffocating people in sonic vomit without any reprieve is a dangerous enterprise. And so in this 8-minute track they trigger the sinews with primal bounding beats and slashing chords, and throw in bird-like twittering tones that seem inviting. In those respects the song has a feral, almost primitive energy that’s undeniable, and makes a damned infectious companion for your reptile brain.

But Wolok also swath the senses in dense, queasy swarms of writhing guitar abrasion and assault the ears with nasty hateful growls, while adding in other bits of electronica that are eerie and disorienting. Enjoy yourself if you can, they seem to say, because the diseases of life are still eating you away.

The Bilious Hues of Gloom was mixed and mastered by C. and features cover artwork by David B., with layout and artistic direction by Evokaos (Brucia Records). It will be released on digipack CD and digital formats, and it’s up for pre-order now. It comes recommended for fans of P.H.O.B.O.S., Abstracter, The Axis of Perdition, and Red Harvest. 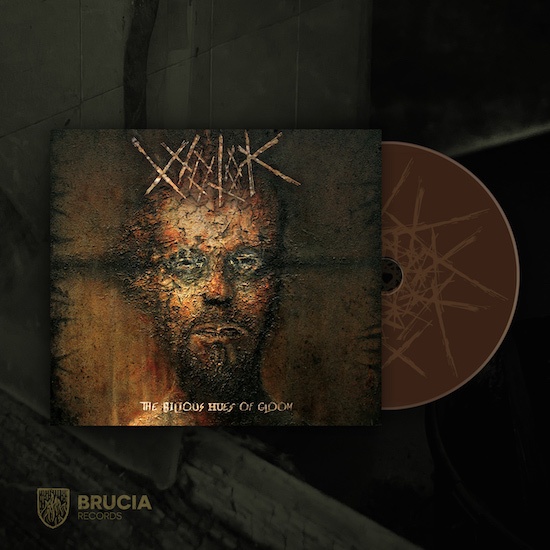 2 Responses to “AN NCS PREMIERE: WOLOK — “THE SLOUGH OF DESPOND””