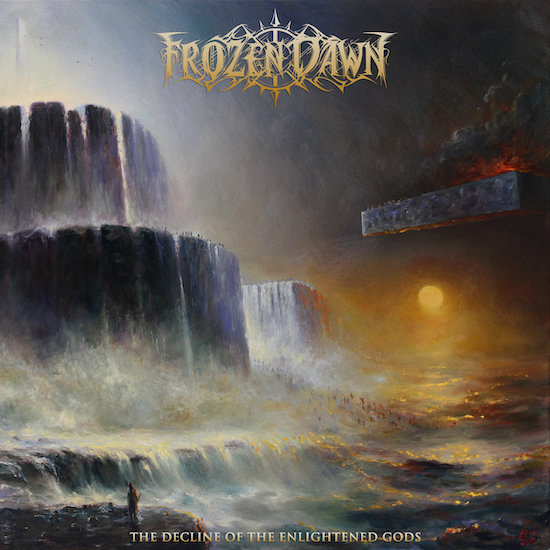 It’s our great pleasure today to premiere the second advance track from the forthcoming fourth album by the Spanish band Frozen Dawn, their first one in five years. Entitled The Decline of the Enlightened Gods, it will be released by Transcending Obscurity Records.

As its title may suggest, the new music of Frozen Dawn plays out on a grand stage. It’s well capable of scathing and scorching the senses, but it continually soars to ravishing heights of startling magnificence, and the melodies play moving lead roles in the unfolding pageantry.

These are the kind of stirring songs that not only get hearts pounding (and breaking), but also prove to be intensely memorable. Not for naught is it said that Frozen Dawn pay tribute to the likes of Dissection, Necrophobic, Sacramentum, and Naglfar, and the choice of cover art by the late great Mariusz Lewandowski is also entirely fitting.

The song we’re presenting today, “Oath of Forgotten Past“, is a great example of all the qualities noted above. 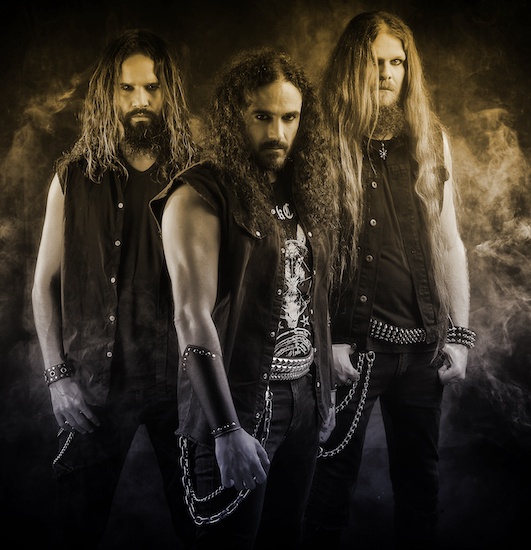 This new track is a multi-faceted but relentlessly gripping experience, one that vividly renders electrifying mayhem, heart-breaking anguish, and mythic magnificence, and so it’s both a visceral thrill and an emotionally moving journey.

As the song begins, booming and tumbling drums, a sky-high melody, and a gruff growl lead the way into a paroxysm of hammering beats, thundering bass, and blazing and berserk guitars. Savage snarls, scalding screams, and crashing chords magnify the breathtaking intensity of the onslaught, which is so searing and grandiose that it seems capable of setting the heavens on fire.

But as the riffing writhes and darts, signs of cruelty and pain create undercurrents of bleakness in the maelstrom. Those currents surface and become dominant when the pace slows and a mournful lead-guitar melody plays out its grief against a backdrop of towering, near-symphonic splendor. As the pulse of the music ignites again, the soloing flares into a glorious spectacle, followed by a finale of immense majestic power.

The song that surfaced before this one is “Frozen Kings“. Nearly two minutes shorter than the one we’ve just premiered, it’s no less exhilarating. The electricity begins right away, thanks to a ringing riff that darts and swirls over explosive detonations and jolting chords.

There’s an aura of grandeur that shrouds this song too, and the kind of hammering beats that get their hooks in deep, plus another spine-tingling dose of inflamed vocal barbarity. But it’s that vivid opening riff that continually seizes attention, and eventually leads into another eye-popping stratospheric solo.

Maybe because this song is shorter, “Frozen Kings” may even be more irresistibly infectious than “Oath of Forgotten Past“, though it’s a close call.

The Decline of the Enlightened Gods was mastered by none other than Dan Swanö at Unisound Studios, and as noted, the instantly recognizable cover art was created by the late Mariusz Lewandowski. It’s recommended by the label for fans not only of Dissection, Necrophobic, Sacramentum, and Naglfar, but also of Thulcandra, Unanimated, Imperialist, and Vorga.

Pre-orders will become available next week at the links below.