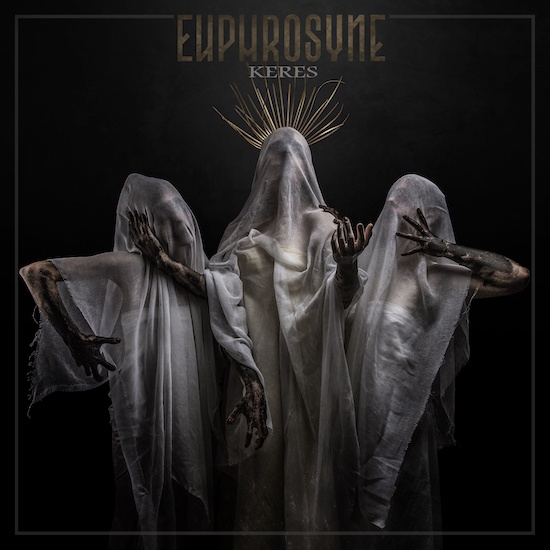 Not long ago the Athens-based, genre-bending band Euphrosyne provided a starting introduction to their debut EP Keres through an official video for a song from the EP named “When My Fears Conquered All”. The video shrouds the music with haunting and harrowing imagery which well-suits the song’s haunting and harrowing lyrics, interspersed with views of the band performing, fronted by the frightening countenance of vocalist Efi Eva.

The music is also unsettling, but also functions as a statement of intent for the EP as a whole — and the statement is to expect the unexpected.

In that one song the band push and pull the listener through a genre-labyrinth, creating an amalgam of bone-bruising bass blows and frenzied, squirming, and darting fretwork, of skull-snapping beats and eerie astral keyboards, of gasping whispers and blow-torch screams, of grand chords and rapidly ringing melodies, of wailing yet anthemic soloing, suddenly high-flown singing, and anguished spoken words.

If there’s a thread that holds all the moving parts together, it’s a steadily encroaching aura of darkness that spans moods of confusion, desperation, agony, and fury, with glimpses of grandeur and reprieve that seem just out of reach.

When you listen to that one song perhaps you’ll begin to understand why Keres has drawn comparisons to the divergent likes of Deafheaven, Steven Wilson, Gojira, and even Behemoth. But the comparisons become both more apt and less apt (because there are ingredients missing from that list) after a trip through the EP’s other six songs with Ms. Eva, guitarist Alex Despotidis, bassist George Gazis, and drummer Kostas Mamalis.

Grandly launched by the mysterious and mesmerizing symphonic overture of “Black Opal”, accented by a smoky sax solo and a rising feeling of splendor, Keres then takes off with the ominous and thundering magnificence of “Pale Days”, a song in which Efi Eva‘s screams are if anything even more shattering than on “When My Fears Conquered”, and her singing even more tormented. “Pale Days” packs a jolt, and blasting drums batter, but it too includes a soulful saxophone solo, as well as episodes of celestial wonder, heart-felt yearning, and stricken melancholy.

Though the band discharge visceral physicality, it’s not out of place to claim that the EP’s opening two tracks are perhaps even more darkly spell-binding and emotionally moving than they are skull-busting and gut-punching. But that’s why following them with the ravaging (yet still multi-faceted) song featured in the video was an astute choice.

And it was equally astute to move from there to “Sister Of Violence”, which is even more overpowering in its bleak intensity. It feels like a vast wave crashing down, and the fear and grief that such an experience would produce among victims and survivors. Efi Eva‘s singing voice again takes charge, leading into a spectacular guitar solo that helps propel the music to eye-popping heights of orchestral grandeur — but her extravagant shrieks and snarls don’t let us forget the pain. 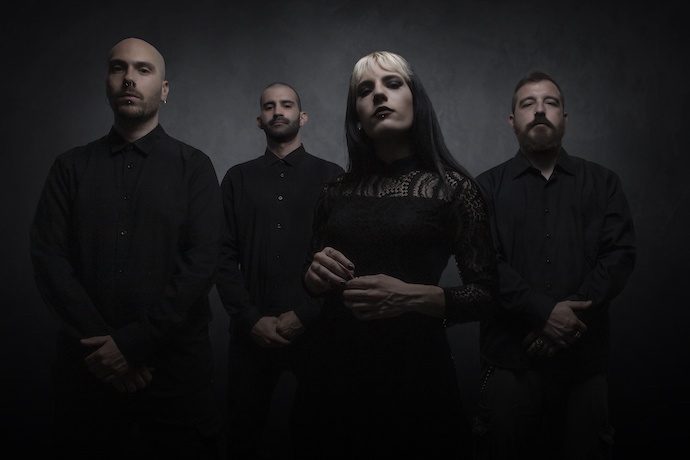 The ever-changing trip of Keres doesn’t end there, of course. It proceeds through the sublimely ethereal but increasingly perilous “Sunbringer”, the sturn und drang of “Within the Ages” and its intervals of sorcerous and sinister beauty, where there’s further proof that Efi Eva could easily have a career as a pop singer, and one more glorious saxophone performance leading into a towering, panoramic finale.

Brought to a close by the slow, glistening piano melody that traces sorrow in poignant and dreamlike fashion through the title song, Keres is the kind of EP likely to leave lots of listeners with eyes wide open and wondering what just happened. It’s an ambitious and adventurous work of post-black metal, risk-taking in the range of genre styles that flower within and among the songs, but somehow making it all work — or at least that’s how we hear it. Judge for yourselves:

Keres will be released on November 25th on many digital platforms.