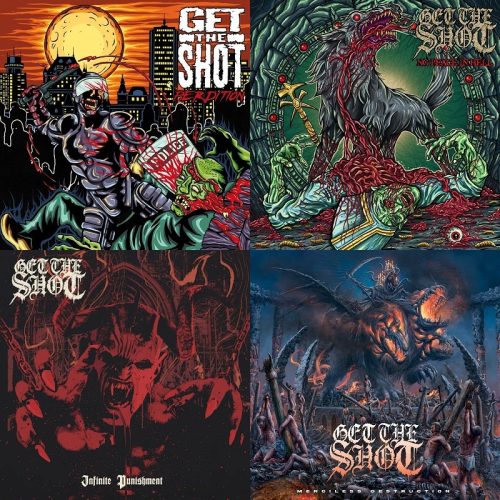 This has been a big year for Hardcore, Metallic Hardcore, and Death Metal-meets-Hardcore… and I, for one, have been absolutely loving it.

So much so, in fact, that I’ve decided to dedicate the final Synn Report of 2022 to Canadian crushers Get The Shot (whose new album, Merciless Destruction, was released just last month).

Of course, while there’s been a lot of digital ink spilled about the resurgence of Hardcore-influenced-Death Metal recently, Get The Shot clearly come at it from the opposite direction… sure, they’ve got a distinctive Death Metal side (especially on their more recent stuff) but they’re a Hardcore band at heart, which gives their howling vocals, hammering riffs, and hefty, chug-heavy rhythms a slightly different flavour to the Creeping Deaths and Gatecreepers of the world (although fans of those bands will definitely want to give GtS a shot, trust me).

The band’s first album was/is their most traditionally (Metallic) Hardcore, with songs like the snappy, venom-spitting “Scapegoat” and the speedy “Breathing Fire” carrying on a lineage that stretches back to bands like Earth Crisis, Sick of it All, and Minor Threat (with the latter track also possessing a twitchy, thrashy vibe reminiscent of acts such as D.R.I. and Suicidal Tendencies).

The debut full-length also showed off the band’s punkier proclivities, especially during songs like “F.T.C.M.” and “Beat the Odds”, which aren’t afraid to throw in a bit of loose-limbed, mosh-friendly melody alongside all the choppy riffs and chunky breakdowns.

Speaking of melody, the moody, introspective interlude entitled “Sacrificium” also showcases a slightly different side to the group, and signals a subtle shift towards a more metallic approach in the last third of the record, beginning with the meaty, muscular grooves of “Atlas” and then continuing into the punch Punk-Metal crossover of “Lifelong Grievers”.

Concluding with the unexpectedly sombre, almost Metallica-esque Metal-ballad that is “Expiation” – which, by itself, reveals several new facets of the band’s identity – Perdition ends with a promise of even bigger, better things to come from a band who, even at this early stage in their career, clearly had ambitions and ideas well above their station.

By the time the band released their second album, a scant two years after their first, they’d already become heavier, angrier, and even a little bit thrashier (there’s a reason I made that Power Trip comparison in the “For fans of…” section at the start), all of which is immediately showcased in the killer opening combo of “At War” and “Rotting Idols”.

The vocals have more bite, the riffs are sharper, the drums hit even harder, and the hooks are bigger and burlier than ever before (especially on the latter track, which is an early highlight of the album), and overall the entire package just screams “we have stepped up our game”.

The thrashy energy, punchy, pugilistic rhythms, and infectious gang-vocal chants of “Cold Hearted” make this song another obvious stand-out (though, truth be told, there aren’t any weak tracks to be found here), with the stomp-heavy strains of “Erase the Scum” and the ridiculously catchy, Employed to Serve-esque “Hostile” only reinforcing the much more metallic approach of the record (and then some).

The venomous “Lynch the Lord” and the relentless “Prime Evils” demonstrate that, even as they evolve in a more Metal-oriented direction, the group haven’t lost their knack for writing short, snappy Hardcore hate-anthems, while “Nothing to Nothing” straight-up revels in its chaotic, Thrashcore/Crossover vibes (right down to its climactic, squalling solo).

With “Prometheus”, however, you start to get a sense of where Get the Shot‘s metallic muse is going to take them next, with the group’s underlying Thrash/Punk/Hardcore identity beginning to adopt a darker, more Death Metal influenced overtone that edges their sound that little bit closer to bands like Xibalba, Kruelty, etc.

And it’s through this lens that the almost Death/Thrash-esque “Shark Bait” and the absolutely devastating title-track can be seen as harbingers of what to come with the band’s next release, Infinite Punishment… which you can read about right now by just scrolling a little further down the page!

The band took a little bit longer between records this time around, but that extra time was clearly spent in the musical gym, because Infinite Punishment is one seriously heavyweight slab of Death Metal influenced Metallic Hardcore that kicks off (after the ominous intro of “Purgation”) with the thrashtastic assault of “Faith Reaper”, whose crushing Death-core climax transitions seamlessly into the absolutely massive, and utterly merciless “Waging Death”, which inflicts an almost Justice for the Damned-level beating on your eardrums over the course of just under four minutes.

The raging Death/Thrash/-core crossover attack of “Blackened Sun” once again reinforces those Power Trip comparisons I made earlier, right down to the impressively intense-yet-intricate drum work, razor-sharp hooks, and shamelessly bombastic soloing – all culminating in one humongously heavy climactic sonic beatdown – with “Hellbringer” then delivering a knock0out blow that is, arguably, even faster, even heavier, and even angrier than its outstanding predecessor.

With “Absolute Sacrifice” the band then up the Death Metal quota even further, dropping some of their thickest, sickest riffs yet (the one during the song’s finale in particular is an absolute monster), while the heaving grooves of “Demon Stomp” and the almost Grindcore-level intensity of “Evil Rites” together prove that heaviness comes in all sorts of forms (and Get the Shot have a talent for all of them).

If you didn’t already guess by the track title, “Eternal Decay” is another punishing Hardcore-meets-Death Metal (or Death Metal-meets-Hardcore) crossover composition that – apart from the vocals, which maintain their connection to the band’s Punk/Hardcore roots, even as they experiment here and there across the album with both guttural growls and gritty melodic cleans here – errs even further towards the Metal(lic) side of the spectrum, with both the riffs and the drums opting for a burlier and more bombastic approach, with “Profaner” also following this path in a manner that wouldn’t sound out of place on the most recent Misery Index album.

Last, but my no means least, the climactic combo of galloping, grooving, thrash-tinged crossover cut “Slayed Kings” and the mournfully melodic, Death Metal-core ballad “Den of Torments” cements this album as both a huge step up for the band overall and one which deserves to be spoken about just as often, and in the same breath, as many of its more (in)famous peers.

Somehow the band’s fourth album actually manages to crank the heaviness up another notch yet again (and considering how hard Infinite Punishment went that’s no small feat), embracing even more of a Death Metal influenced approach, with an even heftier, heavier guitar tone and an even more aggressive amalgam of howling, growling, and gang-chanting vocals across the course of just over thirty eight minutes.

Both “Ultimate Warfare” and “Seeds of Dissension” drop some of the biggest, most explosive, breakdown-adjacent riffs of the band’s career, but keep the agile, “float like a butterfly, sting like a fucking battering ram” dynamic that’s served them so well over the years, lacing the band’s increasing deathly sound with a plethora of rapid-fire Hardcore riffs and reckless, thrashy rhythms, while both the utterly unforgiving “Deathbound” and the fire-breathing “Bloodbather” are, effectively, just straight-up Death Metal tracks with Hardcore vocals, with multiple moments of shamelessly boneheaded brutality that wouldn’t sound out of place on a Dying Fetus record.

“Reign in Blasphemy” then adds a nasty, Grindcore-meets-Hardcore edge to the whole ugly affair, before “Terminal Slaughter” hits you right between the eyes with the sort of hellish Death Metal/Hardcore hybrid that equal parts Napalm Death, Nails, and Obituary (and just as nasty as that description implies).

It’s an absolute monstrosity, make no mistake, which is probably why the band then opt to shift down a few gears and let the acoustic instrumental strains of “Diabolus Vobiscum” give their audience a short, but necessary breather before the Slayer-ised Hardcore riffs and grinding, gut-churning Death Metal rhythms of “Diviniation of Doom” and the absolutely raging “Blind to Peace” crank the heaviness back up to practically ludicrous levels.

The band save the record’s biggest surprise – though, if you’ve been paying close enough attention so far it probably won’t come as a huge shock – for last, with the restrained heaviness and raw, heartfelt emotion of “Season of the Damned II” once again proving that, even at their most measured and melancholy, Get the Shot can still hit just as hard as ever.