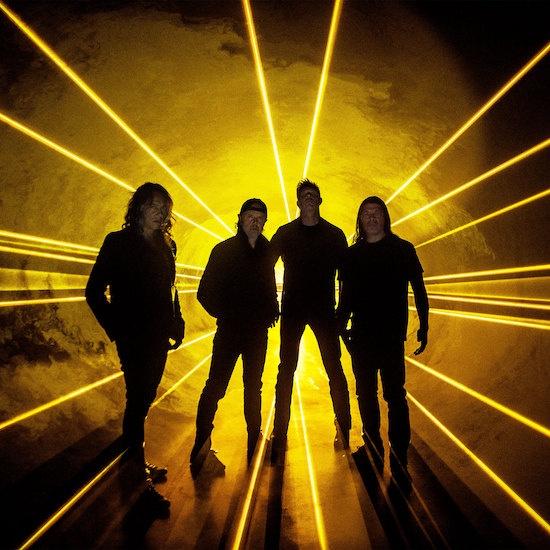 Lo and behold, even though we’re two days past the Thanksgiving break my fucking day job is still mostly leaving me alone, so I’ve got time for a quick round-up of new songs and videos this Tuesday. Given the song I picked as the opener, it’s an outlier from my usual proclivities, but don’t worry, it gets a lot more subterranean after that, and then ends with a rebellious song that qualifies as a well-earned exception to our rule about singing.

A good argument could be made that Metallica is the biggest name in metal, and therefore a name very unlikely to appear at this site, where we tend to focus our attention on bands who need (and deserve) more exposure. Even just listening to their new song “Lux Æterna” wasn’t high on my list of things to do. It felt like I’d just be joining a surging crowd of lemmings and wondering just how big a cliff I’d be falling off of.

And then I began to see comments from assorted friends on social media who aren’t given to mindless fawning, even though, unlike me, they spent their formative years listening to Metallica during the band’s best years. One of them thought Metallica were channeling Motörhead. Another wrote that it sounded like a lost Diamond Head cover from Garage Inc. But everyone seemed to be liking it, even if maybe it was pushing slightly different buttons from person to person. So, I gave in and gave the song a shot. 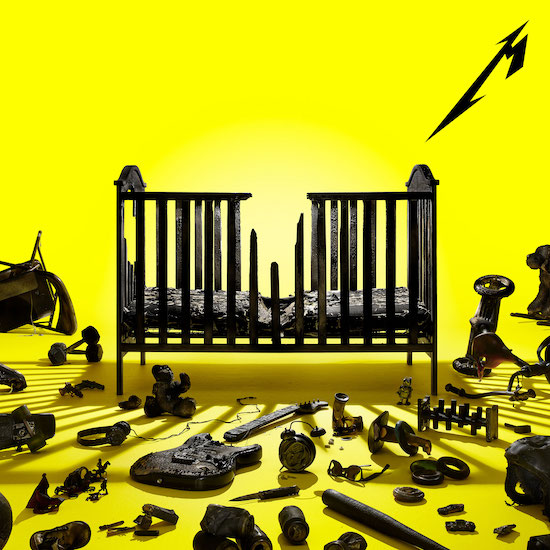 And whadda ya know? I enjoyed the song. Of course, as of this morning the video has more than 3M views just over 24 hours, so it’s unlikely any of you will be discovering it for the first time thanks to this post. I’m mainly leaving it here to see what you think of it and how you hear it, if you feel up to leaving a comment.

“Lux Æterna” is from a new album named 72 Seasons that will be released on April 14, 2023, so named because it refers to the first 18 years of their lives. It’s 12 tracks and 77 minutes long, which is a lot. Hard to imagine that it will be all killer, no filler, but we’ll see.

You’ve probably also seen that Metallica will promote the album with the “M72 World Tour“, which will be a a two-year-long excursion which will see them playing two nights in every city they pass through, with a completely different set-list each night. If you plunk down mney for that, you’ll have to sit through a revamped Pantera and Mammoth WVH as the opening acts one night, and Five Finger Death Punch and Ice Nine Kills as the openers on the other night. I shudder at the thought. 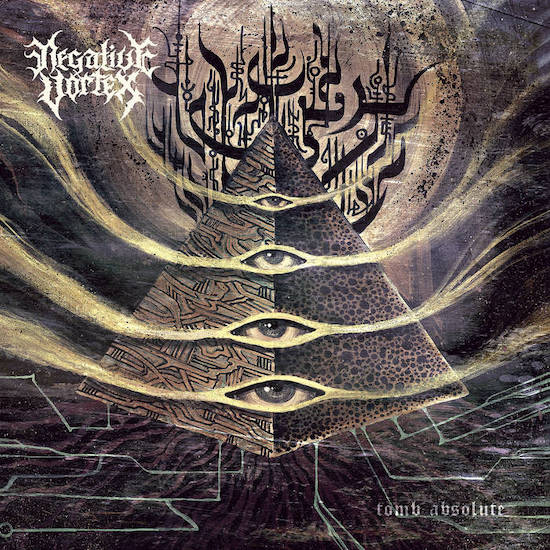 The next song I picked, “Circuta“, had its premiere at Metal Injection yesterday. Hard to know what hooked me first, the enticing bubbling magma of the bass or the cold hopeless whine of the riffage. But hooked I was, and stayed hooked when the song came unchained, with the drums, the riffs, and the vocals boiling in violent derangement.

Lots more things happen before the song reaches the bitter end, including a berserk guitar solo, a staggeringly dismal slow-down in which the vocals sound like the victims of a most sadistic torture chamber, and the guitar wails like a suffering ghost (but is enthralling as well as stricken).

A completely riveting song, it comes from a debut album named Tomb Absolute that Sentient Ruin will release on January 20th. It includes a lot of eye-opening guest appearances, including Massacre‘s Kam Lee as a vocalist on this very song, and Leon del Muerte (Impaled / Terrorizer L.A.), who contributed the lead guitar solo on “Circuta“, as well as Nick Holmes (Paradise lost / Bloodbath), Moyses Koslene (Krisiun), Vik from Whipstriker, and Caleb Bingham (Athanasia). 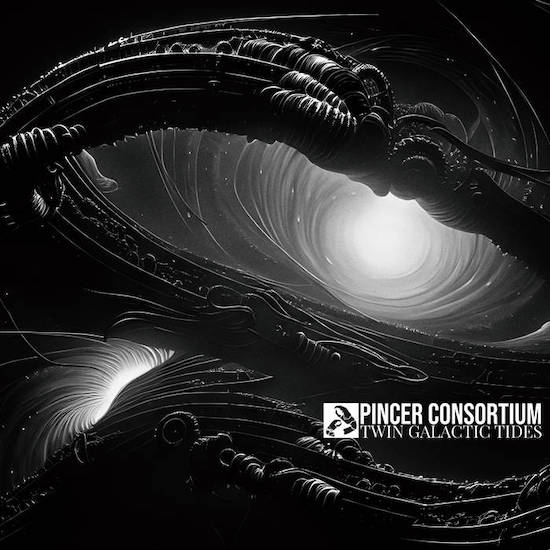 I read the lyrics of this next song before I listened to it. They appear as a gigantic block of text on the song’s Bandcamp page, and function as a hateful, horrific, and hideously detailed statement of intent by some unnamed protagonist to inflict ruin against its enemy on a galactic battlefield. And then this Belfast-based duo (members of Scald, qip, and Sirrah) made good on the threat.

The song itself, “Twin Galactic Tides“, discharges obliterating drum bombardments at a breathtaking rate of speed and swathes that chaos with a dense mass of moaning and screaming guitars. That’s just for starters. The song also sounds like rail guns firing in sequence through the void under the command of a monstrous roaring commander, and weird and wild anti-melodies swirl in glimmering extraterrestrial brilliance above massive low-end upheavals, though their mood is one of extreme agony.

There is no mercy in this musical calamity, but there is a short and surprising break in the catastrophic assault where the iron-toned bass becomes even more prominent.

This is the kind of song where I tell you to take deep breaths before you press play. As far as I can tell, it’s Pincer Consortium‘s debut single. It appears to be part of a forthcoming album named Geminus Schism, and it’s good we will have more from them because there might be some corner of this wretched planet still left intact even after this decimating first strike. 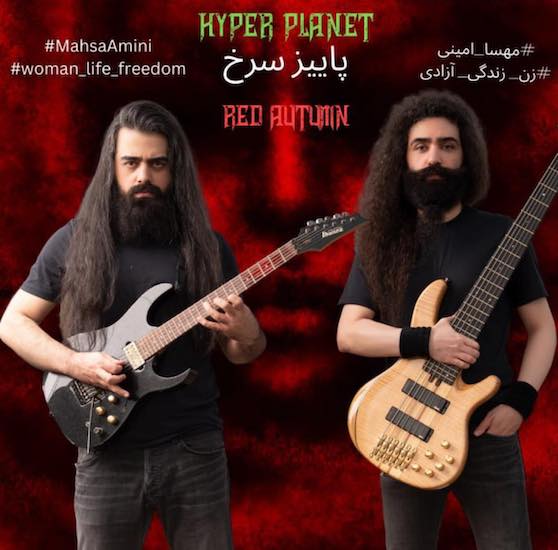 Even here in the West, I suppose anyone who pays any attention to the news, or even just the World Cup, knows about the death two months ago of a young woman named Mahsa Amini, who perished in a Tehran hospital after being arrested and beaten by the Iranian morality police for the crime of failing to wear a hijab, and of the historic protests her death has unleashed against the country’s repressive theocratic regime.

With that in mind, I’m concluding today’s round-up with a song called “Red Autumn” by the Tehran-based progressive metal band Hyper Planet that’s dedicated to her and to “all the brave Iranian women who are at the forefront of the movement toward freedom, democracy, and human rights”.

The song is presented through a video that includes scenes of the protests in their various forms, and of brothers Amin and Armin Saffar performing the music and Amin also singing. It features an instrument called the santur (performed by Ali Saffar), as well as acoustic guitar, in addition to the more usual metal instruments. At least to these Western ears, the Persian melodies are exotic and captivating, as are the high-flying vocals, but it’s a heavy and jolting song too, and brings to the fore lots of elaborate and adventurous fretwork as well. It all proves to be thrilling and inspiring.

More power to Hyper Planet and the the struggles they honor here.