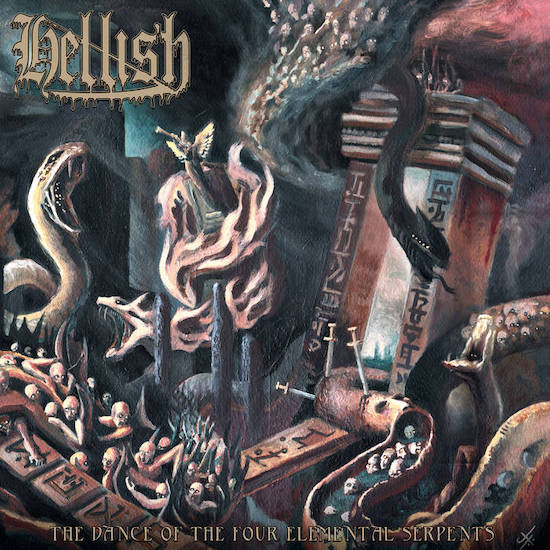 It seems quite likely that fans of black/thrash are well aware of the Chilean hellions in Hellish. They’ve filled up the dozen years of their existence with a plethora of frequent releases, including two albums and last year’s stand-out EP The Vermis Mysteriis. As the releases have piled up, however, it has become increasingly evident that Hellish have been bent on giving genre die-hards more for their money than what might be typically expected from this evil genre, and there’s no more striking demonstration of those ambitions than the band’s new album The Dance of the Four Elemental Serpents.

Not surprisingly, the especially inventive and interesting nature of the new music has become the lead story-line of the promotional activity for the album, which is set for release by Dying Victims Productions and Unspeakable Axe Records on December 16th, and as you’re about to discover through our premiere today, the music really is dizzying as well as diabolical, just as the PR material proclaims. 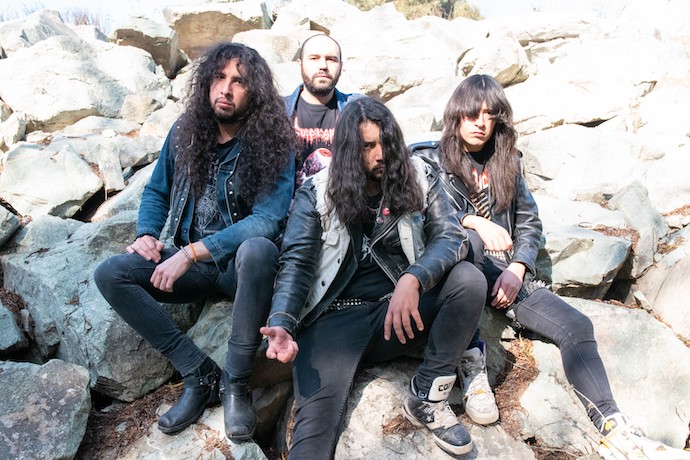 What you’re about to hear is a song named “Violent, Bloody & Cold“, and it’s all those things, and more.

Cold and menacing at first, but even then sparked by electrifying drum fills and bursts of jittery fretwork, the song becomes increasingly menacing, thanks to truly scorching vocal hostility and whining chords that somehow sound both brazen and beleaguered. The music twists and turns in weirdly seductive ways, propelled even further in that direction by a guitar solo that’s more mesmerizing than flame-throwing.

From a black/thrash band you might have been expecting a race rather than something so mid-paced and exotically enticing, but don’t forget the first two words in the song title. Just when it seems the song might be about to end, Hellish accelerate, and then you’ll really get a good taste of the mischievous maneuverings of the bass, the bamboozling boisterousness of the drums, the wondrously wicked frenzies of the guitars, and the throat-ripping lunacy of the vocals. Yes, you can imagine violence and blood, but more than that it sounds like wild, free-wheeling joy.

Dying Victims will release the album on regular and special-edition vinyl, both of which will come with extra goodies and download codes, and Unspeakable Axe is providing the CD edition. Pre-orders are available now — and we’re also including a stream of the previously released album track “Dreamlike Fears“.