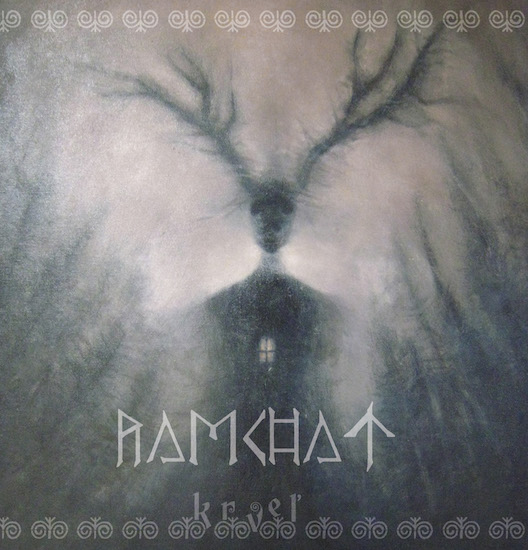 Almost exactly two years ago I had the great pleasure of premiering an album named Znelo lesom by the Slovak pagan metal band Ramchat. At that time I wasn’t familiar with their previous works, and so I went into the album with no expectations. What I found was a gigantic surprise — so surprising that I likened it to a comet racing across the skies.

I opened the floodgates to a great torrent of words about that album in introducing its premiere, but here I’ll only repeat 104 of them:

“The songcraft of Ramchat is, for want of better words, idiosyncratic and mercurial. At a high level, it could be described as a fascinating amalgam of folk-influenced blackened metal and devilish rock that’s capable of generating (among other things) orchestral levels of grandeur, barbaric levels of savagery, bewitching episodes of sinister sonic sorcery, and heart-breaking moments of melancholy. In each song (no two of which are quite alike) the band pack an ingenious array of sonic sensations and moods, and while the changes are often unexpected, there is still a natural flow and integration among them which makes the progressions cohesive rather than jarring.”

Ramchat have now brought us another new album, one named Krveľ (“Blood”). Having been exposed to the marvels of Znelo lesom, I had very high hopes for it, and have not been disappointed. And so here we are again, with another Ramchat album premiere — though it’s not literally a premiere. 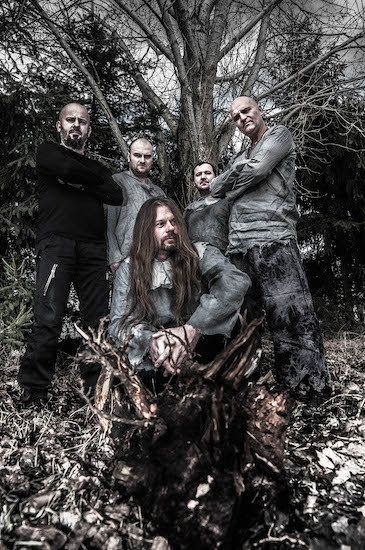 Krveľ was actually released about 10 days ago. Unfortunately, our crowded premiere schedule didn’t allow us to host the complete music stream in advance of that date, or any sooner than today. We do take the word “premiere” literally around here, but hey, it’s the first revelation of the album on YouTube, so there’s that. But mainly we bent the rules because, once again, Ramchat have created something marvelous.

True to form, Ramchat have again created music of considerable variety from song to song, and even within the individual songs, and that’s evident even during the progression of “Mreli” as the album opener. It builds slowly, creating both an inviting and a haunting mood, and brings into play feverishly swirling guitars and keys as well as grand chords and savage snarls. A burst of orchestral bombast suddenly segues into mystical ambient tones, and then the music blazes and soars again to even greater heights of symphonic splendor — and delirium.

It’s interesting that Ramchat chose such a moody, magisterial, and electric piece, one suitable for a vast concert hall, as their opening statement. There’s a strong temptation to get stuck on that song rather than move forward, but once you do you’ll quickly see again the evidence of Ramchat‘s mercurial musical personality, because “Krútňava” immediately delivers heightened ferocity and darkness, with drums blasting, guitars seething and writhing in frenzies, ominous chords towering, and deep growled vocals both ravenous and imperious. That song also rocks and menacingly swaggers, and it has a frightening and feral intensity that’s spine-tingling.

The changes continue, from the bleak and jolting experience of “Ani majster, ani žiak”, which is leavened by vivid darting and swirling arpeggios that seem yearning and resilient, and elevates through strident cries of startling fervor, a gloriously fire-bright guitar solo, and pulse-pounding symphonic strings, and then onward to the sinister and savage onslaught of “MestoBes”, where witchy folkish melodies intertwine with the sounds of cold blaring horns, weird and ghostly keyboards, and an adrenaline-fueled dervish whirl of instrumental madness. 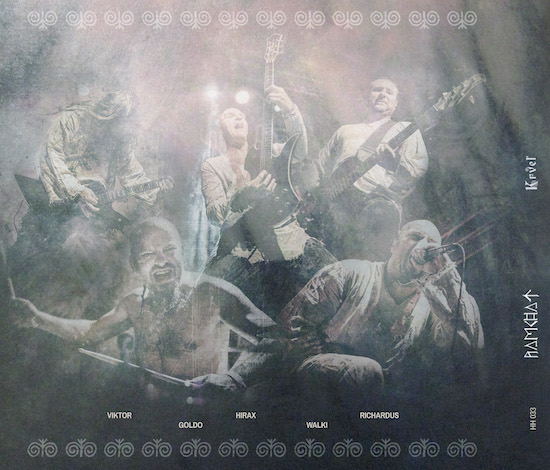 By now you’ll have learned how elaborate and multi-faceted Ramchat‘s songs are (if you didn’t already know), and how widely they range among moods and sonic textures. For that reason it’s tempting to continue writing about the songs track by track, because it’s tough to sum up the album in broad strokes. But I’ll resist the temptation and simply say this:

The remaining five songs, from “Mord” straight through to the mystically beautiful but equally jolting “Krveľa”, continue leading listeners through a remarkable musical and vocal panorama (including striking spoken words, both male and female), where splendor, savagery, delirium, and sorrow reign, along with classically influenced sophistication; viscerally compulsive, hook-laden heavy metal riffage; muscle-moving beats; and old folk traditions. The music seems both deeply rooted in the earth and sky-flying, and there’s never a dull moment. Witness for yourselves:

Krveľ is available on jewel-case CD, digipack CD, and cassette tape formats, with a vinyl edition expected in the spring of next year. The album is also available now on all major streaming platforms.