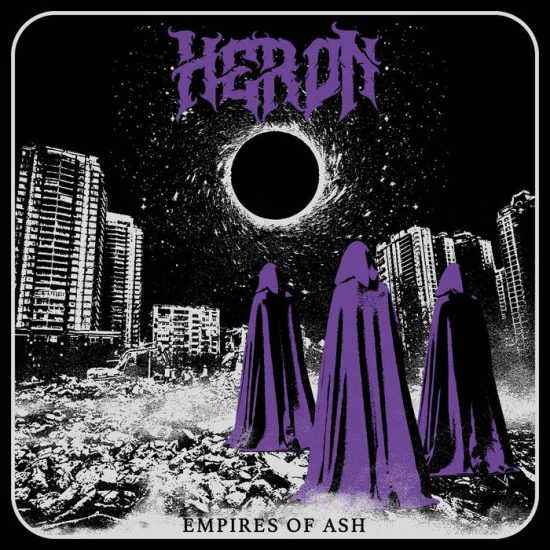 Sludgelord Records released Time Immemorial, the second album by Heron from Vancouver, BC, in May 2020. I began listening to it in late March of that year, right around the time I contracted the delta variant of covid and everything around most of us worldwide was going into a panic. Little did I know that I’d spend the next year hunkered down at home, with few places to go and fearful of going out anyway.

What a wretched year that was. In mere months the death toll became shocking (and the toll included two of my oldest and closest friends). Cities became ghost towns. Bizarre theories circulated. Time seemed to warp in odd ways. In my case a kind of numbness eventually set it, and shorn of most human contact my normally gregarious self experienced a rare long-form depression. Day-drinking became my therapy of choice. There seemed no end in sight.

Of course it was just a coincidence that Time Immemorial was released in the ravaging early months of the pandemic, but the music seemed tailor-made for the experience because it was so damned punishing in so many ways. For better or worse, it’s hooked in my head to a lot of traumatic memories, yet I valued it as a form of catharsis for a lot of black moods over a lot of days and months.

Now here we are, two and a half years after Time Immemorial made its harrowing initial impact on me and a lot of other listeners. The world is open again, though the virus continues to kill, apparently at an acceptable rate. Other catastrophes now dominate — extremes of weather and authoritarianism, of war and starvation, of prejudice and hate, along with plentiful new sources of hopelessness. If the virus were sentient it might be jealous of these competitors, though who knows, it might find a way to seize the spotlight again. 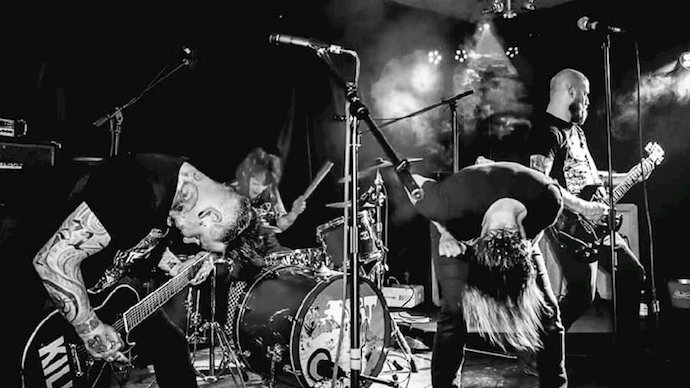 Of course it’s again a coincidence that we have a new Heron album in the midst of current turmoils and confusions, though it clearly seems to be a product of what has happened to all of us since the last record came out. And so it isn’t a repeat of Time Immemorial, but it still seems fitting.

The changes in the music aren’t quickly or easily summed up, but I might venture to say that it’s less viscerally pulverizing and less immersed in dimensions of dread, despair, and mental dislocation than the last album (or maybe I’m just less immersed in those dimensions myself). It seems more grieving, more haunted, more wrenching, which are sensations that many of us might feel in reflecting back about the last two and a half years.

But make no mistake, it’s still the kind of album that dominates attention when you hear it, and it is still cathartic. Even its title can be understood as a sign of the times: Empires of Ash.

To underscore the point, Heron dedicate the album “to all those we have lost along the way”. They further say: “Empires of Ash is an ode to impermanence and was created in the aftermath of the long, lonely hours of isolation. The album contains sweeping and melancholy post-metal sections intertwined with crushing doom and acidic sludge.” 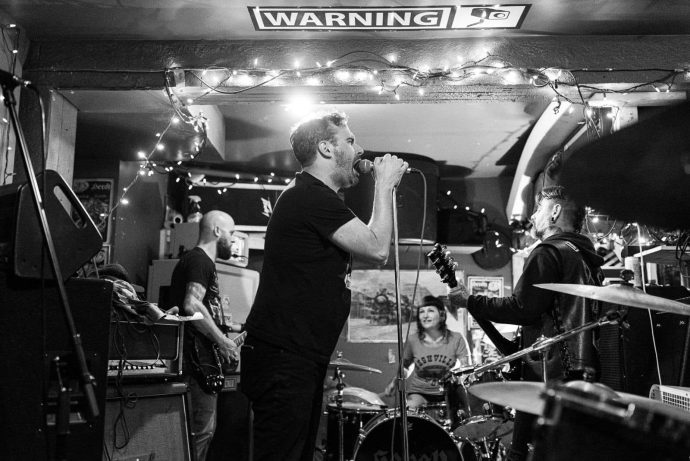 Some things haven’t changed. The innovative and convulsively head-hooking talents of drummer Bina Mendozza still shine. That was immediately apparent on the first single from the album, “With Dead Eyes“. The clever little rhythm that jumps as the bass growls and the guitar languidly rings in the song’s stripped-down opening is a beautiful thing, and it remains a highly infectious presence throughout the track. But that’s just one of many examples of how much the drumming adds to the pulse of the music across the album as a whole without feeling the need to get fancy.

Another thing that hasn’t changed is the throat-ruining, flesh-rending intensity of the vocals, which are emotionally shattering every time they appear. Perhaps more than anything else, they bring the pain. And to be sure, Heron pick their moments to give you vigorous head butts into the bridge of your nose or a meaty fist into the kidneys, and the rough, dirty, and feedback-ridden sound of the riffs is still scarring. Moreover, at places like the back half of “Rust and Rot”, the pace staggers and the mood descends into dismal, emotionally lightless depths.

But on the other hand, the slow ring and mesmerizing wail of the guitars that open “The Middle Distance” seem like a poignant melancholy remembrance, before the craggy chords come down, expressing their own method of grief. The opening of “Hauntology” achieves a similar effect, though perhaps even more eerie because of the shimmering tones that surround the notes, before the drums and fuzz-bombed guitars get at your muscle reflexes, the latter jabbing as well as writhing. There’s something about that song that does express confusion as well as loss, but also a kind of vibrant resilience.

And speaking of vibrancy, “Hungry Ghosts” sounds downright feral and freeing, menacing but wild, and it will probably get your legs bouncing more than any other single track. Yet even that head-hooker of a song isn’t without its own measure of agony and loss.

By my lights, Heron save the best for last. I’ve already mentioned the gripping beat in “With Dead Eyes”, but the song brings a lot of emotions into play — it’s beguiling and unnerving, it’s a fighter and it’s forlorn (even anguished), and the doubled vocals are startling in the fervor of their torment. In the way the song begins and ends, there seems to be a realization of beauty in the memories of what’s been lost, and maybe even a hint of hope.

And with all that wordiness behind me and you, we get to the main object of this post — a premiere stream of the entire album:

Empires of Ash was recorded, mixed, and mastered at LRS Studios in New Westminster, BC, with sound engineering by Michal Kraushaarwill. It will be released by Sludgelord Records on December 2nd (tomorrow!) on cassette, compact disc, and all streaming services. Pre-orders are available now:

P.S. On the album’s Bandcamp page Heron have included the brief poem “Death Stands Above Me” by the influential English writer, poet, and activist Walter Savage Landor , who died in 1864 at the then-remarkable age of 89.

“Death stands above me, whispering low
I know not what into my ear:
Of his strange language all I know
Is, there is not a word of fear”

2 Responses to “AN NCS ALBUM PREMIERE (AND A REVIEW): HERON — “EMPIRES OF ASH””