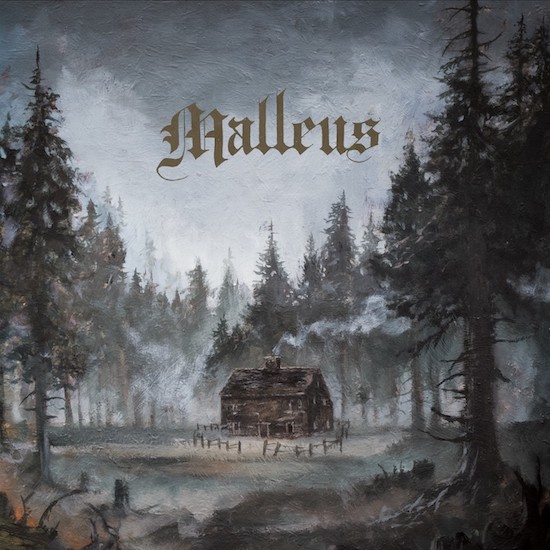 (Hope Gould returns to NCS with this lively review of the forthcoming debut album by Boston-based black metal band Malleus.)

In 2016, Boston’s Malleus served up a wholly satisfying slab of first-wave-worship black metal with their debut EP, Storm of Witchcraft. Unmistakably channeling Bathory’s evil, primitive approach to Venömhead proto-thrash, Malleus drive their freshly sharpened necromantic blade deep into the heart of black metal’s beginnings. While many bands tap into the same necrotic root, Malleus capture a true metal vitality that is often imitated and rarely replicated.

Revisiting this approach in the subsequent tease of an EP, Night Raids, the underground was left eager for a further glimpse into their portal of the past. At long last, the sinister portal has been re-opened with the announcement of their debut full-length, The Fires of Heaven, set for release on January 27th through Armageddon Label. 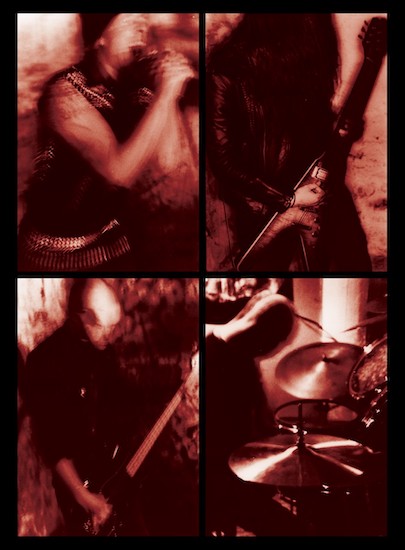 Straight out of the first-wave playbook, The Fires of Heaven opens with an instrumental, “The Tempest”– an ensemble of sorrowful strings that swell like storm of damnation clouds until overtaken by the buzzsaw riffing in the scorcher of a second track, “A Dark Sun Rises.” Malleus just kicked in your door and tossed in a Molotov cocktail full of earworm riffs – total destruction.

The riff attack comes like a sucker punch, tapping into a “Fast” Eddie Clark charisma and a razor-sharp Mantas guitar tone. The thick and discernible bass makes for a meaty low-end reminiscent of Celtic Frost’s ’85 monster debut, To Mega Therion. The Fires of Heaven has the advantage of modern production techniques that allow for a fuller, more balanced sound than their obvious influences. Gratifyingly, the production feels more like a spit-shine on rust, keeping the grit of the spirit intact.

Drummer, The Relentless, pounds out thunderous double kicks and lively cymbals with a punkish brutishness, firing like pistons on a locomotive from hell. In keeping with the first-wave homage, The Fires of Heaven comes complete with plenty of galloping Hellhammer d-beat runs and resounding “UGH’s” to really drive it home. Stutter-step thrash grooves churn between textural riffs while consistent tempo changes drive everything forward with high-octane intensity. While The Fires of Heaven often feels like an engine at risk of overheating, the rhythm section brims with controlled determination.

There’s a timeless fury in the atmosphere that honors the enthusiasm of their predecessors, allowing for enough space to really inhale the stench of evil. A distinct Quorthon sincerity is captured in the peppering of simple, but urgent, screaming solos over open chord riffs. In fact, a direct call to Bathory’s “Blood Fire Death” is made in the last track, “Mourning War,” beginning with acoustic arpeggiating chords and ethereal keyboard chorusing. Malleus are going for a similar sprawling epic to close The Fires of Heaven, though I find the execution loses steam in the repetition. Even still, they hit the mark on a comparable victorious feel.

The Fires of Heaven is a worthy crack at breathing not only life but also soul into the past. The tracks flow like a love letter, cohesively weaving in foundational elements from the raw to the epic. While Malleus don’t aim to dazzle with innovativeness, their pedal-to-the-floor approach is charged with an inspired energy that honors black metal’s raw beginnings. This album had me revisiting those beginnings with an insatiable hunger and it seamlessly fits among them. If nostalgia is what you seek, Malleus’ necromantic spells are worth paying attention to.

The Fires of Heaven is available for digital preorder on Armageddon Label’s Bandcamp, where you can also stream the vicious third track, “Beyond The Pale” (we’ve included the YouTube stream of it below). LP and CD editions, featuring the beautiful art by Adam Burke, are available for pre-order through dropdeadhc.com.

One Response to “MALLEUS: “THE FIRES OF HEAVEN””