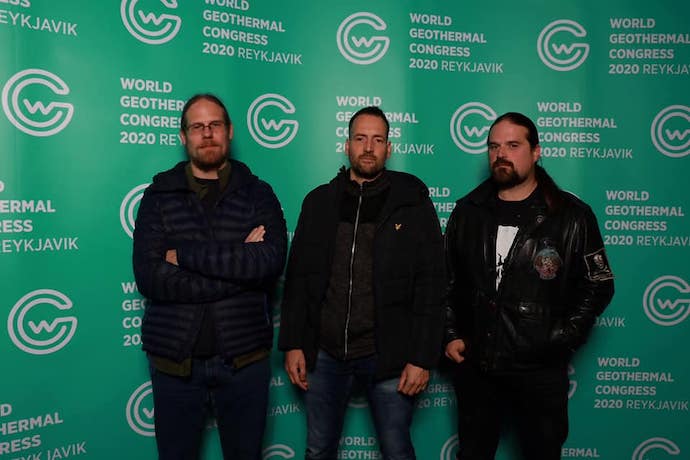 As I explained in yesterday’s round-up, we’re now beginning a week when (by design) we don’t have the normal volume of premieres on the calendar. This gives me more time to stare at the wall (I swear there’s a face in that wood plank), pick lint from my navel, twiddle my thumbs, and try to pull together more round-ups of new songs and videos.

The timing is fortuitous, because despite the fact that only a couple of weeks remain in the year, new songs keep pumping out of the heavy metal firehose, and my list of them continues to metastasize. In trying to figure out which ones to recommend here, I decided to leave out some of the bigger names, such as the new songs from Memoriam and Ne Obliviscaris, and to end with a compilation that I’m making no effort to “review”. 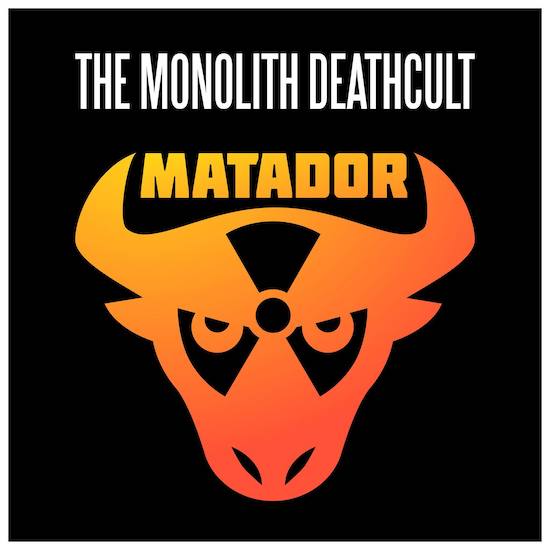 For more years than I care to count (okay, it’s been 11 years and 8 months), we’ve been writing relentlessly about the music of TMDC. I believe they haven’t worn out their welcome here for two reasons: First, the music has remained appealing, and second, the band’s promotion of their music has usually been both hilariously over-the-top and hilariously self-deprecating. Take for example the commentary that accompanied the release of their newest single, “Matador“:

After recovering from the “Three-headed Death Machine” debacle, The Monolith Deathcult retaliates with an awesome demonstration of superior firepower with the brand new single “Matador(rrrr)”!

Carsten Altena: “As a vegan I wasn’t keen to collaborate on a song about the slaughtering of a bull, but I am happy to have learned that the song is actually about the utter annihilation of mankind, which is totally fine with my beliefs.”

Michiel Dekker: “I am convinced that after the release of this track the traditional support act mockery chant “Slaaaaaayerrrrrrr” will be replaced by “Matadorrrrrrrr” very soon.”

If you’re going to write a song about the nuclear annihilation of mankind and the ruination of the planet, of course you’d better create something that isn’t just destructive, but destructive on a vast, indeed epic, scale. And TMDC do give it their best shot (and if not their best shot, a damned good one)..

The backbone of “Matador” is a particularly cold and cruel infliction of thuggish brutality, a big pounding stomp paired with massive clawing and blaring riffage and guttural proclamations from the depths of the Maraina Trench. To reach epic scale, the band send out eerie high-flying synth waves, towering brazen chords, and bursts of percussive obliteration. And to represent the derangement in their narrative, you’ll find feverish fretwork convulsions, a warped guitar solo, pinging keyboards, and extravagant cries. The thing is not only pulverizing, but damned catchy too.

Methinks you’ll also enjoy the clever lyric video and the blatant cues it provides about what’s happening in the music, plus an embedded reference to a video game most of you are probably too young to remember — and a line from the great and apocalyptic Dr. Strangelove.

P.S. If you missed it, “Three-Headed Death Machine” is another single TMDC released this year to help commemorate their 20th anniversary, and in case you did miss it, I’m including the lyric video for that one too. 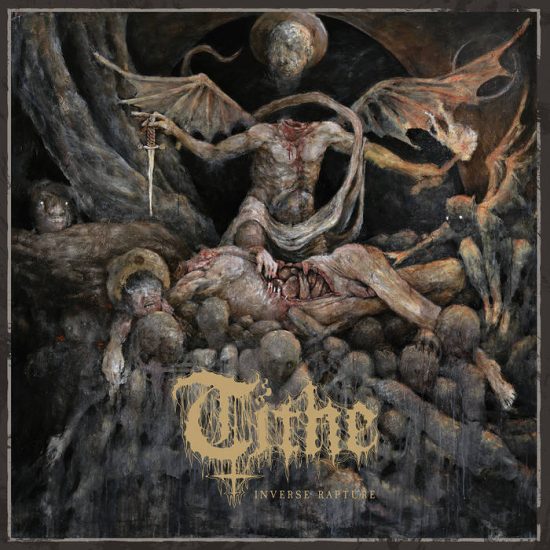 Next up I chose the title song from this Portland trio’s forthcoming second album Inverse Rapture. I’ll forewarn you that it’s best to find something solid to hold onto, because even though the song begins in oppressively dismal fashion, Tithe do kick the drumming into clobbering gear and twist the riffs into sounds of hideous suffering, and they eventually discharge a mad storm of bullet-spitting percussion, feverishly writhing guitars, and furious blood-spraying screams.

But that’s not all, at times the song seems to peal like funeral bells; the bass maniacally throbs like a heart that’s bleeding out; the drum-fills get absolutely insane; and the massed guitars jolt and swarm, blare and blaze, like high-octane nightmare fuel.

“Inverse Rapture” indeed. This is a bone-smasher to be sure, but if you also want something that captures in stroke-inducing terms the madness of violence and the delirium of agony, you’ve come to the right place.

Inverse Rapture will be released by Profound Lore on February 17th. The attention-seizing cover art was made by Abomination Hammer. 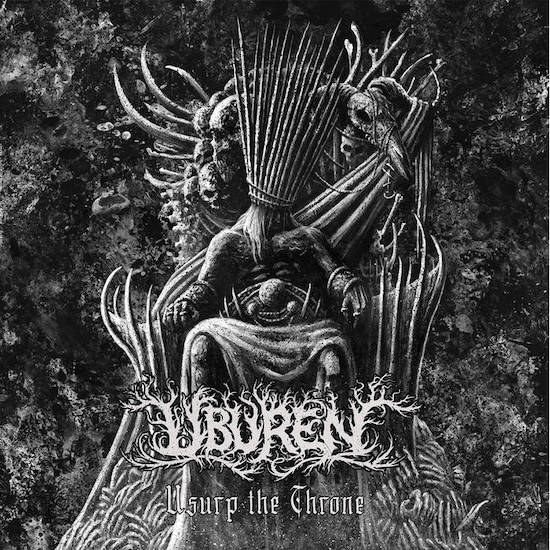 Honestly, that Tithe song put me in a particular frame of mind, and it made it very easy for me to choose “Harken Now” as the immediate follow-on.

This song, if anything, seems even more violently insane than Tithe‘s new track. From the first moment Uburen discharge a hell-storm of blasting drums, uber-turbulent bass, a mass of harsh scathing guitars, and utterly berserk vocals. The snare does eventually snap like a metronome, and some other grooves emerge in the low end, but the blizzard-like riffing remains unnerving as the twisted melody rises and falls in misery, and the vocals remain palpably hostile and harrowing.

There comes a point near the end at which the volume subsides and the bass takes a more prominent role, but the song remains true to itself — a portrayal of desolation and the suffocation of hope.

If you continue listening to the Bandcamp player below, it will shift into a second song from Uburen‘s new album. That one is named “When the River Breaks“, and it is a very dark river, an immersive song that’s quite capable of carrying the listener away into a nighttime of sorrow. (The big bass gets another chance to shine there, and the throat-cutting vocals rise into extravagant yells).

The name of the album is Usurp the Throne, and it will be released on January 20th by the Dusktone label, which describes the record as “Cold and atmospheric, raw and haunting”. Those adjectives seem right, based on these two tracks 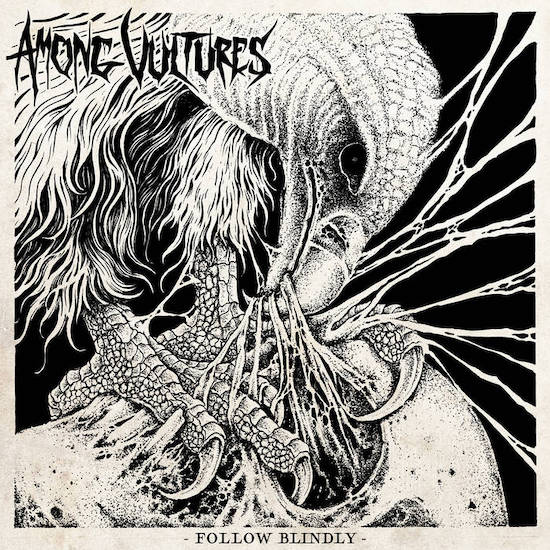 Next I picked a single from this Swiss band, who spent the first 20 years of their recording career under the name Attack Vertical before deciding to change musical direction and pick a new moniker in 2019. When we premiered a song for their first album under the new name 2 1/2 years ago, I called the music “a ferocious amalgam of hardcore and death metal that’s bruising, battering, and guaranteed to put a high-voltage charge straight down your spine”.

The band’s new single “Follow Blindly” stays in that vein. If you happen to be around someone who’s suffering a massive heart attack and you’re without defibrillator paddles, just put headphones on ’em and jam this song. It inflicts a full-throttle beating and simultaneously afflicts the mind with vicious riff swarms and rabid howls (which get very close to singing).

The band make good use of a vibrant bass and eventually put a vivid pulse into lead guitar too. The band make a sudden change into a softer and more sorrowful direction, and the grief remains even when the full band return and the wrenching vocals reach for the sky. Of course the song builds again, but it doesn’t lead to a place of any comfort.

The band say that this song is “a glimpse of our new upcoming EP to be released very soon”. 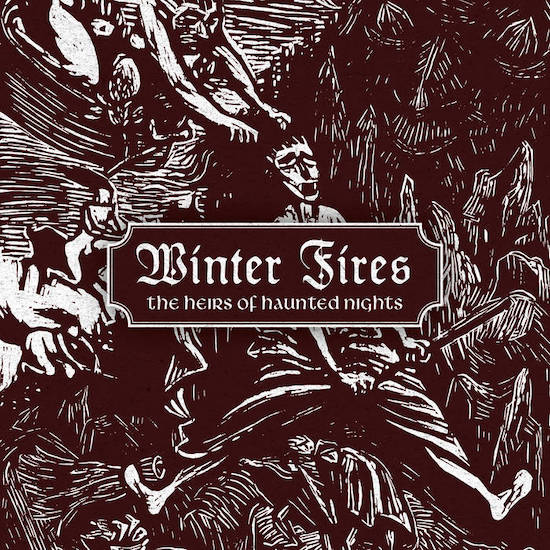 Now we close with the compilation I mentioned at the outset. It’s a digital download that costs a meager €0.99. It includes 19 tracks, drawn from all the 2022 releases by the Eisenwald label. At one time or another we wrote about almost all of those. If you just look at the band names in the player below, you’ll probably realize what a cool collection this is.