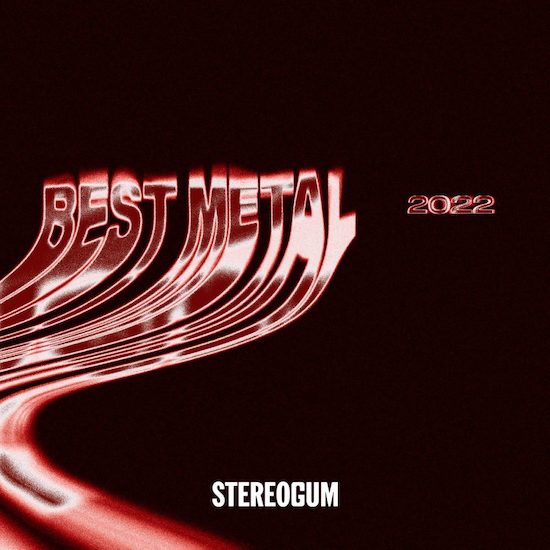 Stereogum easily qualifies as one of the “big platform” web sites whose year-end lists of metal we perennially include in our LISTMANIA series. Of course, the site appeals to an audience of music fans much larger than devoted metalheads, but its staff includes a talented and tasteful group of metal writers who among other things are responsible for the site’s monthly “The Black Market” column, which has been a great source of discovery for extreme music for ten years running now.

It follows that Stereogum‘s annual metal list is one I especially look forward to seeing every year, and the 2022 edition is out now. As usual it consists of only 10 entries, with accompanying reviews of the choices by Ian Chainey, Michael Nelson, and Wyatt Marshall. And again as usual, the list is preceded by an essay written by Ian Chainey.

I’d like to think that if I didn’t write for NCS every day I could use the time to come up with something as funny, erudite, and thought-provoking as that essay, but if I’m being honest I know I couldn’t. Same goes for the reviews accompanying the 10 album picks. But I don’t let that humbling and somewhat jealous realization interfere with enjoying the writing, which I did, and always do.

The essay also includes statistics, such as this one: “There have been 7,994 full-lengths released or slated to be released in 2022. That’s slightly off 2020’s 11-month pace of 8,409. Either way, and everyone please chant this like we’re on a game show, ‘Metal, there is a lot of it.’” That’s for damn sure.

As for the Stereogum list itself, it’s a bit bamboozling. I’m sure I would have been less bamboozled if I’d read every one of The Black Market columns this year, but because I didn’t, I got a lot of surprises.

There’s an album on the list by the strangely named Sunrise Patriot Motion, which turns out to be the work of Will and Sam Skarstad of Yellow Eyes. There’s another one by the Japanese quartet Asunojokei, and a debut record by Luces Lejanas, which is the solo work of an anonymous Spanish artist who goes by the code name Morthalion. I’d never even heard of any of those, much less listened to them.

And then there’s the Blut Aus Nord album the guys picked for the top spot on the list. It isn’t Disharmonium – Undreamable Abysses, but instead a collection of songs previously released as part of a subscription service. I have a history of jumping quickly on every BAN release, but based on the Bandcamp description of what this one was, I put it aside for later… and still haven’t heard it.

So, definitely some surprises, and also some validation, because I was also enthusiastic about the albums from Inanna, Chrome Ghost, and Heaving Earth.

And damn, after seeing Sonja on the Bandcamp Daily list I shared yesterday here they are again, which I guess is reinforcement of my resolution to check that one out, even though it includes singing and reportedly some kind of amalgam of goth, post-punk and metal. And damn, there’s Blind Guardian again, but that’s still a bridge too far. Believe it or not, I still haven’t listened to all of Immutable.

To read the write-ups and listen to the music, go HERE.