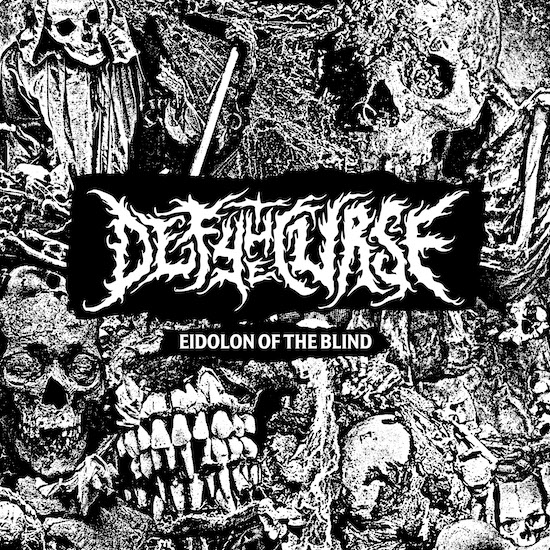 In September 2018 we came across a song from the then-forthcoming self-titled debut EP by the Dutch band Defy the Curse, and it lit us up like a torch. The band was relatively new then, but was composed of members who had previously honed their sonic weaponry in such groups as Legion Of The Damned, Collision, Slam Squad, Inhume, and Acid Deathtrip. In verbally frothing about the music, we ticked off some of what made it so gripping:

“First, they know how to cook up a clobbering caveman riff, and then flesh out that brutal thing with a massive HM-2 tone and the kind of drum-and-bass work that slugs damned hard right in the solar plexus (and the neck). The first minute-and-a-half of the song is just made for headbanging (and made very well for that purpose).

“Second, the band are also adept at awakening that dormant circle pit in your head, which is what they do when they start romping, rampaging, and chainsawing after that mid-paced opening segment. (But fear not, they come back to that staggering opening rhythm soon enough).

“And third, the band’s vocalist clearly needs to be tested for rabies.”

The rest of the EP also proved to be a hellaciously good offering of primal death/crust, and it left us hungry for more. Five years of hunger is a long time, but at last we’ve got new music from these marauders, in fact a full album’s worth of new music, which will be brought to us on January 15th by Hammerheart Records under the name Horrors of Human Sacrifice. What we’re fiendishly happy to bring you today is an album track named “Eidolon of the Blind“. 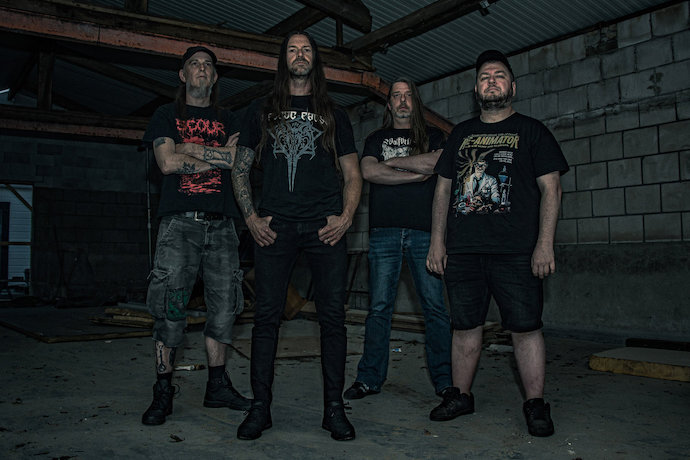 In a compact three minutes or so, Defy the Curse pack this new song with a lot of delirious, dire, and daunting experiences.

The music is menacing and mauling right from the start, a vicious and viscerally compelling attack of pummeling double-kicks, skull-smacking snare strikes, swarming HM-2 guitar abrasion, and cold-hearted roars. Even when the music downshifts into a somewhat less maniacally ferocious experience, the gut-slugging bass, blaring chords, and raw howls still put a premium on pulse-pumping hostility.

The band’s crust-punk influences show themselves too, in scampering beats and slashing riffage, though the sound is still crunchy and crushing. And the changes keep coming as the music slows and begins to drag the listener through a trough of skulls, creating sounds of blaring desolation and moaning misery, augmented by weird, wailing guitar tones high up in the range and by vocals that seem as tormented as they are enraged.

Before today, the band released the first single from the album — “Leading Into the Realm of Torment” — and we’re sharing it too, for those who might have missed it. This one arrived with a video that gives fans a beautifully lit view of the band in action. Like today’s new song, the music creates a range of sensations, from d-beat-fueled rampaging to bone-smashing bleakness and supernatural soloing that radiates suffering.

“Eidolon of the Blind” will be released tomorrow as a single, with its own cover art. Hammerheart will release the album on CD, vinyl LP, and cassette tape formats, with apparel. It features artwork by Rafal Wechterowicz from Too Many Skulls (Slayer, Ghost, Kreator) and it was recorded, mixed and mastered by Toneshed Studio (Dead Head, Inhume, Trouble). Get your orders in now via the link below. 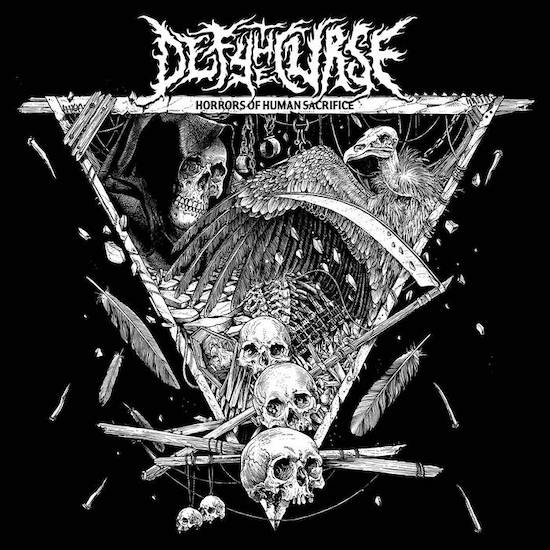