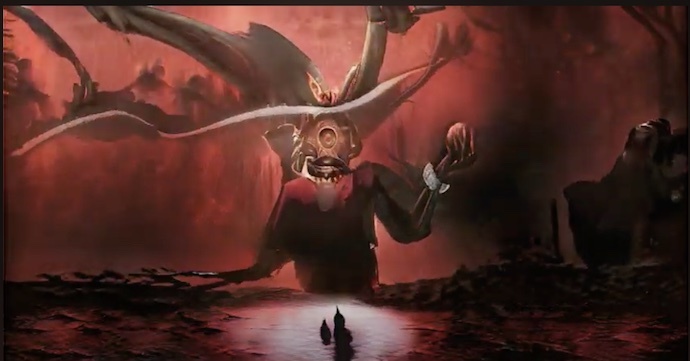 Our old friends Of Wolves put out a hell of an album through Trepanation Recordings two years ago. Entitled Balance, it garnered a lot of well-deserved attention for its heaviness, its near-relentless intensity, its political stances, and its kaleidoscopic amalgamation of musical influences.

We devoted a fair amount of attention to the songs that emerged over a long period leading up to the album’s release, and now we’ve got a new reason to revisit the record, thanks to an unusual and likely controversial video for a punishing song from the album named “Maker“. 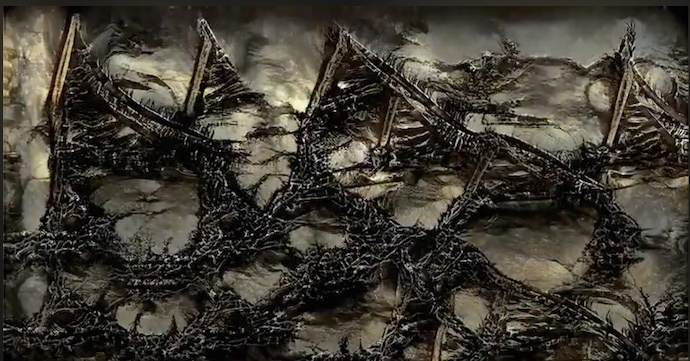 At a time when Artificial Intelligence is advancing by leaps and bounds, and justifiably creating serious concerns about how it will change our lives and the risks it may pose to the continuity of human existence itself, Of Wolves used AI to make this video. It’s no coincidence that they chose “Maker” as the subject of this experiment. As explained to us by Steve Wolves (who worked with AI systems to make the video):

The song is about the the huge concepts of god/s, demons, &/or what makes a god, is it a doctor who brings life into the world… Or saving a life? A woman giving birth… life? Or taking it? destruction? Aliens? The big bang? A string of numbers? future tech? AI?

Well because of that it seemed fitting then that we work with Artificial Intelligences to create this video. The AIs that we used were fun & easy to interact with & we learned (as they did) as we worked. It was the perfect video to collaborate with some of the actual subject matter from the song.

And here’s a further statement about the song, but this one was rendered by one of the AI systems that Steve worked with to make the video:

Is Maker life? or death… The concepts of how we got here… & what makes a god? Creating life or taking it? what gods? are we gods? whos gods? aliens? space dust? artificial intelligence? Sentient? Collaborating with various AI systems a place in between these thoughts & concepts was created. Between reality. Behind the curtain. Beneath the veil. Outside of your plane of existence where all is one & we are all god/s. Where god doesn’t exist & neither does light or time. Nothing can’t exist with something. Where the void is forever & growing, in every direction. Gaining speed and traveling backward. As life fades it is renewed elsewhere. Where nothing exists in everything & energy changes forms. We are all one with what we created & the result is stunning! 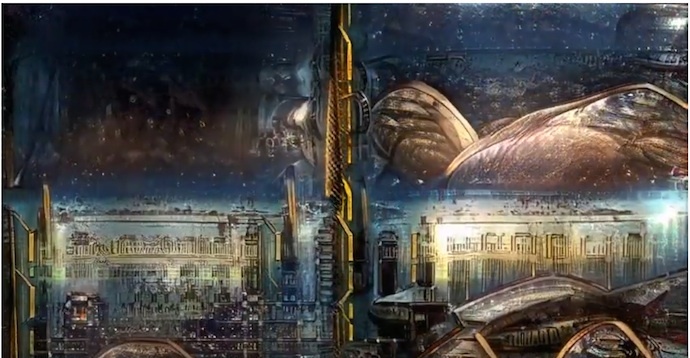 The imagery in the video changes constantly, constantly morphing seamlessly from one fantastical vision to the next, with almost no time to comprehend one vista before it becomes another. Sometimes the imagery seems abstract, and at others nightmarish landscapes and beings emerge from the kaleidoscope. It’s a mysterious, mystifying, and mesmerizing pageant, but not one that will bring you any peace.

As for the music, if you haven’t heard “Maker” before, it’s a crusher, and not just because it’s a sonic hammerfest. The unhinged vocals are scarifying to the senses, and the riffing becomes a roiling acid-bath, leading into both tank attacks and convulsions. And at the end, things get even more bleak and nightmarish.

We want to add a postscript here, or rather Of Wolves‘ own postscript

No one was harmed in the making of this video and no artists have lost any money or work from it as Steve does all our videos. We realize the huge conversation & concerns about everything that is and will be AI & the needed bill of rights for artists, creators & everyone else online. He is available for hire as he creates & edits videos for other bands & companies as well and this was all his idea. This is a labor of love. This is therapy.

A few more pieces of Of Wolves news: First, they are working on new material and plan to get into the studio again early next year. Second, after a non-stop multi-year battle overcoming one hurdle after another, Balance will finally be released on vinyl, mainly mastered specifically for that format, in a special limited run of 125 white and 125 180-gram Black, all with a satin finished gatefold jacket to showcase the artwork. More details about that will be forthcoming. And in the meantime, if you haven’t heard Balance yet, waste no more time and check it out below.

2 Responses to “AN NCS VIDEO PREMIERE: OF WOLVES — “MAKER””