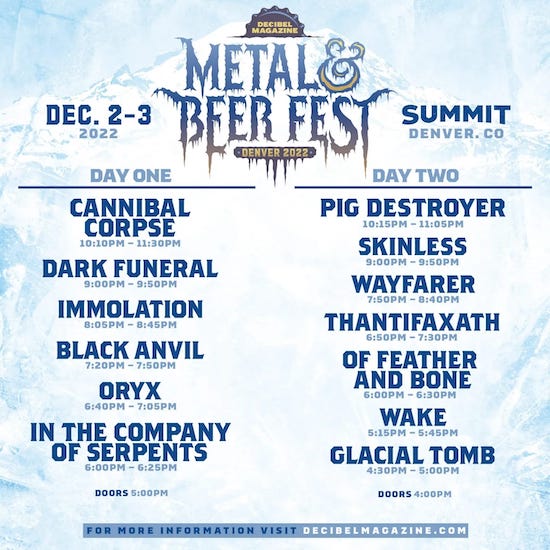 (Last week we published our friend Gonzo‘s report on Day One of the recent Decibel Metal & Beer Fest in Denver, and now we’ve got his write-up on the second day’s performances and beers.)

Day 2 at any festival always comes with a price – exhaustion, overstimulation, tinnitus, alcohol poisoning, IBS… the possible danger is almost limitless. But so is the potential for having a truly amazing time worth writing about.

For the second day of Decibel Metal & Beer Fest in Denver earlier this month, things could’ve easily gone in any direction for this humble scribe. 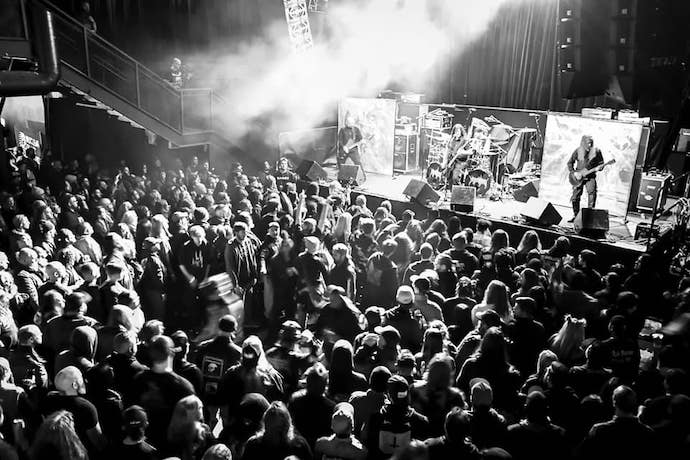 In case you missed it, my Day One writeup listed out the brewery and merch highlights, of which there were plenty. I won’t waste any time with the setup there, but there is an important lesson I learned from my time at 2017’s festival of the same name in Philadelphia:

Do not, under any circumstances, assume that it’s a good idea to pre-game at other breweries before going to this fucking festival.

It might sound like a rookie move, but when you’re traveling and meet other likeminded maniacs from all corners of this country, you can easily get a little carried away. I was also surprised to see how solid of a craft beer scene the good folks in Philly have to offer, so it became way too easy to get sucked into the novelty of it all.

No such moves were made to kick off the night this time, and I’m a better man for it.

This left much more opportunity for sampling the multitude of beers that were pouring throughout the evening, and my first choice was the magnificently tasty Decibrew Vol. 2 from our local landmark Trve. It’s a simple enough beer – a Kolsch hopped with mandarina Bavaria, magnum, and citra, and it was easily one of the best beers in the building that evening.

It was even better when paired with the brutality of Denver’s very own Glacial Tomb. The band came out as a trio to kick things off, noticeably missing one member. Main man Ben Hutcherson (also of Khemmis fame) was no less fired up, barreling through the band’s setlist like he was pounding a keg of something whipped up by Khemmis drummer and Trve head brewer Zach Coleman. The band is definitely a heavier, more bombastic entity than Hutcherson & co.’s doomier cousin, and the venue was already getting packed at the ungodly hour of 4:30 pm to watch.

You can’t not crush a Trve beer while listening to Denver metal.

Next up, Canadian death-grind unit Wake took the stage. Their latest album Thought Form Descent was a total banger, and the band leaned heavily on it for most of their 30-minute set for the evening. “Swallow the Light” was definitely a highlight, along with “This Abyssal Plain” from the Devouring Ruin record.

The Calgary-based outfit have had an amazing trajectory in just a few short years, as evidenced by Decibel tapping them to appear in another DBMF in Philly a few years back. Having never seen them before, I had no expectations, but their unrelenting blast beats and jackhammer guitar assault made for a solid addition to this lineup.

Given that the band gave a shout-out to their eponymous brewery (and this beer in particular), this was a no-brainer. The beer itself was brewed in collaboration with Takeshi from Japanese psychedelic wizards Boris, and has a distinctly smooth finish. Love it.

We got back to the local scene next with Of Feather and Bone. The knuckle-dragging death metal churned out by this Denver trio is a sight to behold on stage, and I’ve somehow managed to miss it until now. I’m not super familiar with their music, but what I can tell you is it’s a dirtier-than-dirty incarnation of ’90s death metal with a twist, not far from what Tomb Mold have been gaining more attention for.

OFAB have every right to be in the conversation with their Canadian brethren, however, and their riffs are so dirty you’ll need a shower after watching their set. I’d just have to settle for more beer, given the circumstances.

Pairs well with: Embrace of Death Grisette, Bone Up Brewing

Another no-brainer, this light and refreshing grisette might be the antithesis of OFAB’s music, but the brewery churned it out with their buds in the band. With notes of lime and pineapple hitting your mouth in a super-satisfying duality, I’d drink this thing no matter what music I’m listening to.

We got treated to something completely different on stage at this point: Mysterious Canadian cloak-wearing trio Thantifaxath. Truth be told, I love this band, and I caught the last half of their set a few years back at Seattle’s very own Northwest Terror Fest.

This set, however, was on another level.

Angular riffs and arpeggios sliced and diced their way across unpredictable songwriting throughout. White-hot vocals seemed to singe the very stage the band was standing on, as fierce growls and ear-piercing screams were emitted from the faceless vocalist/guitarist putting on an otherwise wordless clinic before our very eyes. Lots of material from Void Masquerading as Matter, the band’s only full-length, was featured, on top of some other stuff I didn’t recognize. My hopes of a new album are higher than ever.

In case you hadn’t noticed yet, yes, there was definitely a theme this evening of “beers brewed in collaboration with the bands at the festival.” This black lager, though, was worth drinking on its own, and stood out as one of the only black lagers available for the weekend.

Before we knew it, the local scene reared its badass head once again. Wayfarer were about to take the stage, and any time I get fortunate enough to catch their live show, it’s a good day.

Nobody really does the subgenre of “frontier metal” quite like Wayfarer. While other bands like Spiritworld (whom, spoiler alert, I’ll be writing more about this month when I throw my annual top 20 list onto these very pages) also wear the “death-western” persona really well, the Denver boys have a more blackened approach to their craft. Their music is basically the soundtrack for a post-apocalyptic zombie thriller set in Death Valley – bleak yet hopeful, beautiful yet brutal. It’s sonic art of the highest form.

“Vaudeville,” from Wayfarer’s most recent masterpiece A Romance with Violence, always slaps in such a specific way on stage. It’s long, but it’s a journey, and much like the rest of their set, you’ll be elated to be included in their covered wagon of death.

I love a good Mexican lager, and the taste of this gem – with its flaked corn crispiness and slight sweetness – make for an ideal when you’re listening to the aural equivalent of “High Plains Drifter.” Much obliged, pardner.

The one and only brutal death godfathers in Skinless were set to hit the stage next, and I’d be remiss if I didn’t mention the sheer lunacy that was about to go down in the pit during this set. With songs like “Cuntaminated” and “Tampon Lollipops,” well, I dunno, you be the judge.

The band tore through their bottom-heavy, down-tuned-to-the-bowels-of-Hell set for almost an hour. Vocalist Sherwood Webber brought the charisma, honoring 30 years as a band (which seems incredible to hear, and subsequently makes me feel old as fuck.)

Skinless kept it old school all night in honor of their anniversary, laying out cuts as the aforementioned two songs, along with “Foreshadowing Our Demise” and “Tug of War Intestines.” Brutality, thy name is Skinless, and your inimitable live show is the cream of the filthy crop in the world of brutal death metal.

What better way to celebrate an anniversary than with this outstanding smokey wonder? Smoked toffee, dried fruit, and caramel round out the body of this kickass limited-time offering.

The last time I saw Pig Destroyer, it was almost midnight in August. I was standing knee-deep in a swimming pool at the outdoor stage for Psycho Fest, and I was out of my fucking mind on mushrooms.

Needless to say, this time would prove to be a much different experience.

The Baltimore grind gurus were set to close out the weekend’s festivities. You never truly know what you’re going to get when you watch them, as I’ve learned over the years. Will they come out in Hawaiian shirts and throw beach balls into the crowd? Will they toss a disturbing number of blow-up dolls around while screaming incoherently? Or will they just come out and melt your face off with 20 songs in a row, none of which are longer than 90 seconds?

I suspect there was some degree of relief when the set turned out to be the latter, but vocalist JR Hayes seized the moment to fuck with the exhausted crowd just a few songs in.

“What’s the equivalent of a Cleveland Steamer in Denver?” he asked. “What do you guys do here?”

I definitely wasn’t drunk enough to shout out anything clever in response, but that didn’t stop an ass-load of other people from filling in. There was a lot of muffled shouting from all corners of the room, but it quickly became evident that everyone’s energy was quickly fading.

That didn’t stop a fresh Pig Destroyer from mercilessly hammering the festivalgoers with their signature sonic warfare. Noise mater Blake Harrison was at his creepiest, channeling all the disturbing quotes and screams and movie snippets imaginable, and the band coasted through a set of impossible complexity without breaking a sweat. It’s just what they do.

Pairs well with: The sound of a slaughterhouse during peak season.

Seriously, I’d had so many beers at this point that my liver was recoiling in horror. Suffice to say most beers you could drink at the festival would’ve been just fine for this set, so long as your palate wasn’t burnt to an absolute fucking crisp by this point.

I wrote about this in my previous post a little more, but this festival was a 5-star affair. Denver’s metal scene is undeniably one of the strongest in the country right now, and the sampling of bands that joined the bill on both days this year made that a foregone conclusion. I’d love to see more next year – Suffering Hour, Primitive Man, and Neuromorphic are some of the bands just waiting for an appearance on a festival like this. And it’s not like this town in short on beer, either.

When the 2023 lineup gets announced, get your tickets. It’ll be back next year, and I have a distinct feeling it’ll be bigger and better than ever.