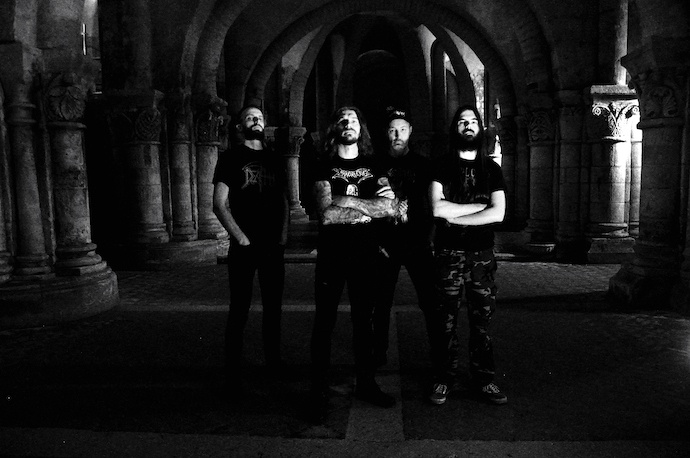 Over the last five years we’ve devoted no fewer than seven articles to the music of the French death metal band Iron Flesh, most recently Andy Synn‘s review of their second full-length Summoning the Putrid in 2020. But just last month Iron Flesh released a third album, that one entitled Limb After Limb, and we can’t let the year go by without paying attention to them once again.

In commenting on the last Iron Flesh full-length before this most recent one, Andy suggested you “think Grave/Dismember meets Autopsy/Hypocrisy, with a little bit of early Paradise Lost and Edge of Sanity added for good measure”.

The newest album, out now on War Anthem Records and Cudgel Metal Mailorder, is a weighty offering, featuring 10 tracks of widely varying lengths, and they provide varying experiences as well. 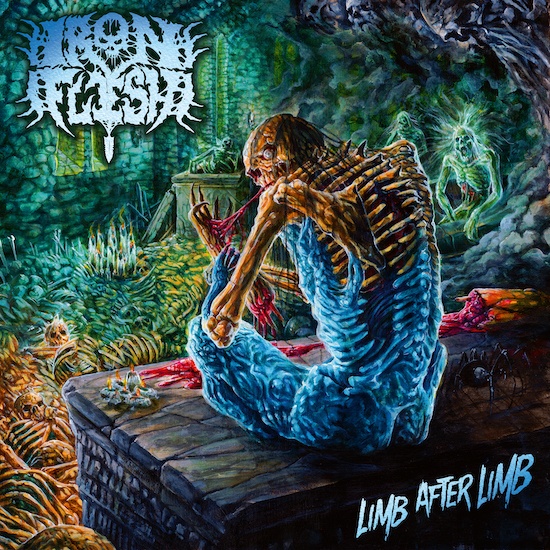 Iron Flesh again prove themselves very adept at combining slaughtering heaviness and evocative melodies. They’re capable of crushing like a monster steamroller, rampaging like hordes of barbarians at the gates, and infiltrating gripping melodies at the same time. Backed by a relentlessly dynamic rhythm section and fronted by raw and ravenous vocals, the riffs bring forth swarming savagery, brutish chugs, moaning misery, gothic gloom, and horrifying grandeur.

Moreover, although each song has its own personality (for a striking demonstration of that, compare “Overthrow of the Sermon Ov God” with “Blessed Be the Creature”), they usually change gears as they go, providing the kinds of variations that keep listeners on their toes, with no temptation to drift away (for a striking example of that, just listen to what happens in even the album’s shortest song, “Sacrorum Profanationem”).

The music makes a visceral impact, the kind that feels mercilessly mauling and titanically bone-smashing and triggers muscle reflexes, but it might be the ringing melodic guitar leads swirling and spearing out through the plundering grooves and massive Swe-death riffage that seizes attention most of all, translating moods of delirium, devastation, agony, splendor, and the emergence of the supernatural (among other sensations) — though the vocals are so unhinged in their sounds of fury and torment that they’re persistently spine-tingling too, and remain that way even when they surprisingly convert to a cold, ringing chant in the stunning “Honor In Death”. And although Iron Flesh don’t over-do the soloing, when it happens it tends to be spectacular.

And then there’s the way the album ends, with classical strings providing the overture to “Procession of Living Cadavers” and the distorted guitars picking up that melody with their own stricken harmony (over spine-fracturing drumwork). It’s a surprisingly elegant and thoroughly captivating denouement to a fine album.

To help celebrate the album a little more, today we’re presenting a video for the new album’s penultimate track “As Ghouls March On“, about which our own Andy Synn has written the following:

“There’s no question that Dismember have always been a big influence on Iron Flesh, and that’s even more obvious than ever when listening to “As Ghouls March On“.

And it’s this influence in particular, combined with some of that classic Hypocrisy vibe carried over from the band’s previous work(s) which helps explain how and why the quartet are so good at injecting a hefty amount of melody into their music, without diluting the gnarly Death Metal core of their sound.

This song (and the album as a whole) also demonstrate that while the group are unashamedly “Old School” in their approach they aren’t afraid of giving things a little bit of a more modern upgrade as and when necessary, with the incredibly intense blast-work in particular adding a sharper and more vicious edge to the proceedings.

Nor are they afraid of a little dynamic give-and-take along the way, with this track showcasing some of the band’s fastest, most furious moments alongside some of their biggest melodic hooks and darkest, doomiest passages, all in just under four minutes.”

The video is devoted to the band’s performance of the song, but the shifting camera angles and interesting visual effects make it an especially cool accompaniment to a very cool song: