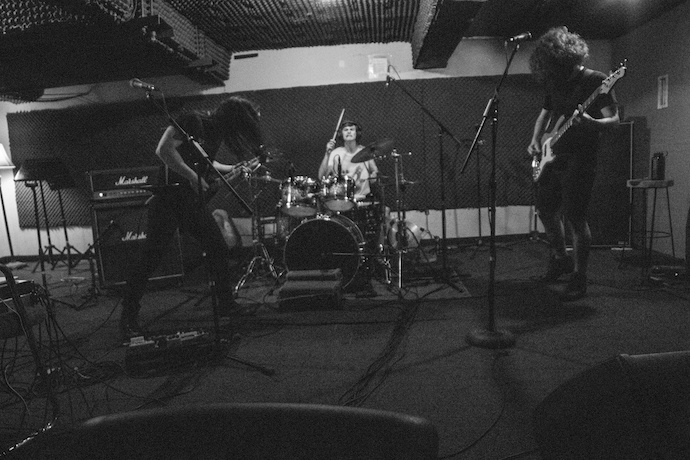 (For our last interview of 2022 we present Comrade Aleks‘ discussion with vocalist/guitarist Vadim from the Toronto-based death metal band Hussar, whose powerful debut album was released a few months ago by I, Voidhanger Records.)

This time I pecked at the band’s name and their “death-doom” tag, and what do we have in the end?!

Alright, let’s start from very beginning. Let me introduce you to Hussar, a ravenous and dangerous trio from Toronto. The band was started in 2018 and its current lineup is Vadim Balanyuk (vocals, guitars), Nathaniel Reynolds-Welsh (drums) and J. T. (bass). It seems that the guys tend to keep their identities anonymous, but Metal-Archives knows!

This year having a demo, a live album, and the EP No Victor (2019) in their discography, Hussar struck back with the first full-length album, All-Consuming Hunger. The aggression and progressive constructions of this technical death metal with  minor death-doom elements represent the album’s title precisely, but there’s always more to learn and we’re here to dig out more about Hussar and its background.

Hi Vadim! How are you doing? How do you promote the release of your debut full-length album?

Hello! Doing well, no complaints here – thank you for having us. So far, promotion has largely been handled by our label I, Voidhanger Records. Luciano has done a great job so far, and got us quite a few reviews – which means a good number of people have had a chance to hear the album.

And what kind of reaction do you expect? You have some expectations, don’t you?

Admittedly, I usually keep my expectations low. All I want is for people to hear the record and resonate with it in some way. Like I said, there have been a number of reviews, some good, some not so good – but I’ve only read one or two that showed a genuine understanding of the album. All others were surface-level praise or criticism. Don’t take that as me being ungrateful, the fact that at least one review understood what we were going for is huge, taking into account just how saturated the music scene is now. 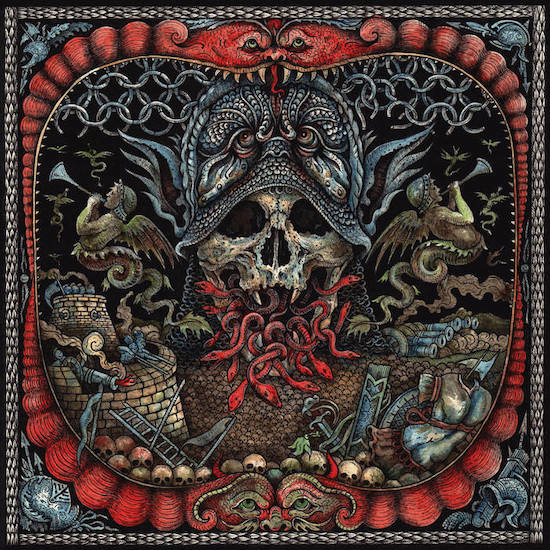 I see that you recorded drums in October 2020, and then guitars, bass, and vocals were recorded “at various homes during late 2020 – early 2021”. Was it difficult to work this way and how did you managed to gather all these parts into one album?

The album was entirely self-produced. We never once went into an actual studio to track, so it had to be done this way. We went to Chris Perra’s home studio to track drums, since he already had a kit setup, had tons of mics and all the necessary gear, but even then it was just Nate and I in a basement together recording drum takes. The rest of the instruments and vocals were all recorded at my house. I actually had to move halfway through the process which is why ‘various homes’ is in there.

It wasn’t particularly difficult. I’ve always self-produced all my music so I have a rhythm and a method that I employ when tackling large projects like this. Of course, someday I’d love to go to a proper studio and get the whole thing done much quicker. Perhaps the next record!

Are you satisfied with the final mix? What was most difficult for you during the work over  All​-​Consuming Hunger?

As a producer I’m almost never satisfied with my final mixes. Mixing is a long and arduous process that I find very draining. The most difficult part is not having a pro space with a nice room in which I can work properly. I’m always having to deal with bad room reflections, as well as improper monitoring opportunities during recording, which results in less than optimal sound quality in the raw audio.

Having said that, now that it’s been more than a year since the album was finished, I’m very happy with how it sounds. Not having to listen to it critically every time and finally being able to just enjoy the finished product is very rewarding. Here’s to the next one. 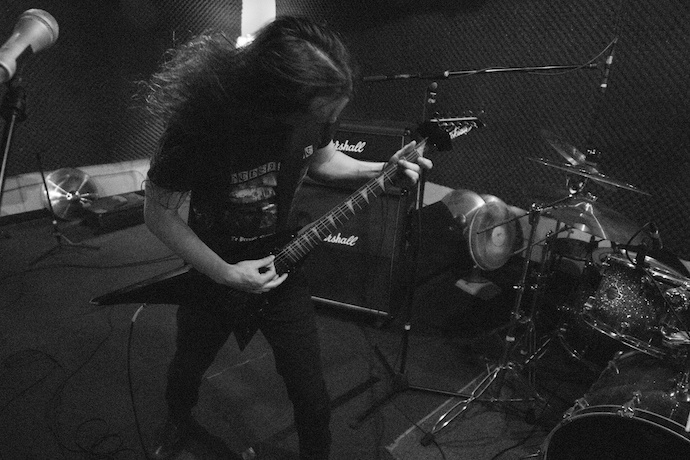 As I understand, it also took time to find a label. Didn’t you have options to release it in Canada?

Finding a label was actually rather easy. I finished the master in early March 2021 – March 3 I think – and we got a deal with Voidhanger in mid-March. The main reason the album took so long to come out was due to a bunch of vinyl production delays.

As far as I’m concerned, the only label in Canada worth shooting for is Profound Lore, and while they showed interest in the record, they ultimately declined. I’m sure there are other great Canadian labels, but I am unaware of them.

Why did you name the band after the light cavalry of the XVth century? All​-​Consuming Hunger doesn’t sound like some folk or power metal, and it’s hard to find any connection in your lyrics.

The name is simply a name. The first record revolves a lot around WWI imagery, a war in which Hussars still played a prominent role even though they were largely made obsolete by the huge leaps in technological advancement at the time.

Really? And that’s all? Not keeping to your roots or some bigger symbolism? 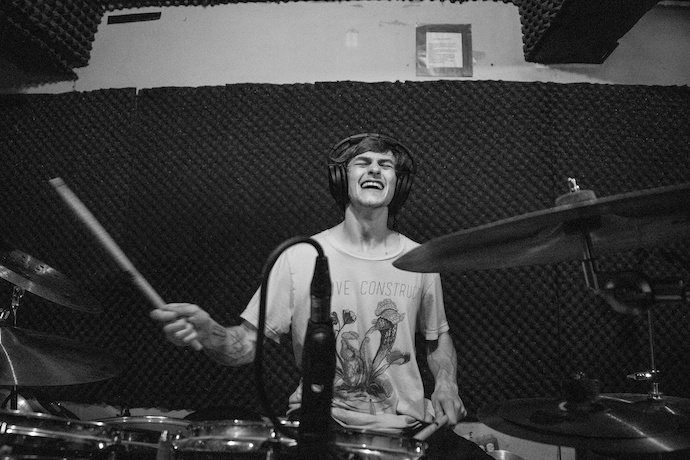 What was the story behind the lyrics? We know when you recorded all the instruments, so when did you actually finish with the vocals?

The lyrics were written almost simultaneously with the music. Usually if there was a productive writing session with the guys, I’d sit down that same night to write lyrics and vocal patterns that fit the new riffs or newly altered arrangements that came to be that evening. I’ll admit to not being the best lyricist, so I don’t dwell too much on the lyrics. Yes, I do want them to be good and to be able to stand on their own, but if a certain song isn’t clicking lyrically I won’t obsess over it. I’m much more of a perfectionist when it comes to the music itself.

And how would you sum up the themes of your lyrics? War? Horrors? Death?

The album deals largely with war – how it impacts the soldiers, how it impacts the people back home. It also delves into power hunger and cult of personality. Two of the songs describe the horrors of battle, two the impact on the ones back home, and two the inner workings of evil and absolute rule.

What were your requirements for Hussar’s sound when you started to write these songs?

Filth was the first word that came to my mind when I first wanted to form Hussar, and funnily enough filth is the first lyric in the first Hussar song ever written. I wanted the band to sound nasty, and plodding – and to not feel pressured to write short and catchy songs. For a long time I’ve wanted to write songs that were longer and more challenging to listen to – so that in itself was a big goal for the overall direction of the band. 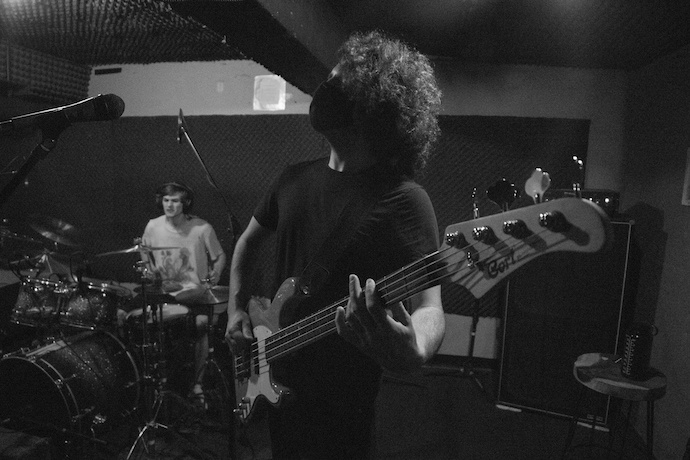 But in the end the album doesn’t sound that dirty. I’d say it’s quite balanced regarding the production… Your music is classified as death-doom metal, though you obviously tend towards its deathly side. What are your core influences?

There are many of course. All three of us come from pretty different musical backgrounds. For instance, the roots of my love for metal lay in bands like Windir, Dissection, Necrophagist, Death, Metallica, etc. As I got older I expanded my tastes and fell in love with bands like Ruins of Beverast, Paysage d’Hiver, Bolzer, Haunting Presence, Adversarial, Angelcorpse, and Revenge. James (Bass/Vocals) is a big fan of jazz fusion while also being heavily into Gorguts, Ulcerate and Thantifaxath, so there’s a pretty significant crossover there. Nate (Drums) is a big-time prog-head – if you can’t already tell from his playing – who loves bands like Car Bomb, Tool, Dillinger Escape Plan, and BTBAM. Of course we also love the giants of the ’70s like Sabbath, Floyd and Zeppelin – but that goes without saying.

And there are echoes of progressive death in your songs, short and killer “Citadel” is a better example. What made you push your boundaries and experiment with techniques?

“Citadel” is the much-needed palate cleanser of the album. I consciously wanted to write a short, fast song to break up the potential monotony of the record. It also serves as the perfect opener to side B if you’re listening to it on vinyl. Playing with dynamics is very important, and my goal is to keep the listener engaged at all times. What better way to do that than to surprise them with a fast stab-fest of a tune after they’ve dredged their way through three relatively slow and grimy ones?

Yes, that makes sense… Is it you who generates the main ideas for Hussar’s songs?

I generally write 80-90% of the riffs, but a lot gets done in the room when we’re all together. A lot of arrangement changes are made which greatly improve the flow of the songs, and many of the slow, building parts get refined to become as good as possible. We work well as a team and I value the opinions of my band mates greatly.

Is Hussar your full-time band or just a studio project? Did you search for playing gigs from the start and tried to have some “heavy metal fun” on your way?

There are other projects that I dedicate time to, but Hussar is my main outlet for metal. We originally did play quite a few shows in our first couple years of existence, but haven’t returned since the shutdown.

What are your other projects? I’ve found only Golod, but nothing more. What’s Golod about?

As of now I play bass in a hardcore punk band called Big Fist, as well as a post-hadcore outfit called GURTH. Golod is a solo black metal project that I work on sporadically. It’s a chronicle of sorts, and is very personal and close to my heart, something I will likely stick with for the rest of my life.

What are your plans for the rest of 2022 now that All​-​Consuming Hunger is finally released?

As of now the plan is to write the next record. We already have a lot of material written so now is the time to hunker down and write, refine, write, and refine. It would also be great to get back to playing live in the near future.

Are you going to move in the same direction with the next record?

We’ll be stepping away from war imagery in favour of other more personal themes. The music will also be a bit more aggressive and unrelenting while still retaining the slow, moody segments.

Thanks for the interview Vadim, let me know when you have the next album released and we’ll figure out something. Would you like to add a few more words for our readers?

Thank you very much for having me! Hopefully a few more people become aware of the album as a result of this interview. All the best.