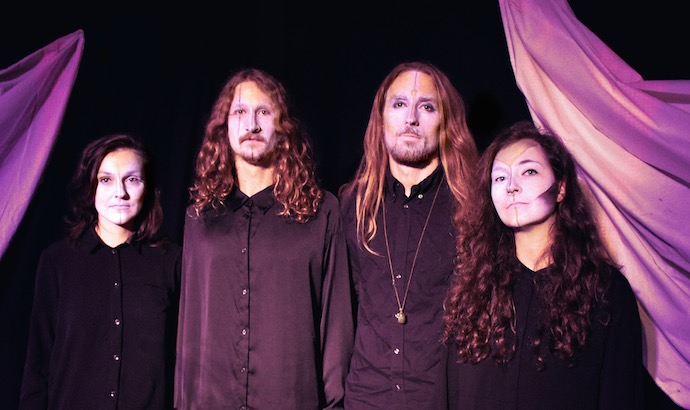 What do you do when you enthusiastically agree to premiere a video, then forget to mark the appointed day on the calendar, and then fail to make the premiere when the day arrives? Well, if you’re me you make abject apologies to the band and host the video the day after it has become public, and you still call it a “premiere” even if technically it isn’t.

In the case of Laudare’s video for their live performance of a new song named “Her Enchanted Hair Was the First Gold“, my fuck-up is especially embarrassing because of how excited I was after watching and listening to the video for the first time. The song is such a fascinating variation on our usual musical fare around here, but rest assured, there is a valid reason why Laudare call their music “violent poetry”.

Well, let’s talk about the poetry first, in both of the forms it takes. 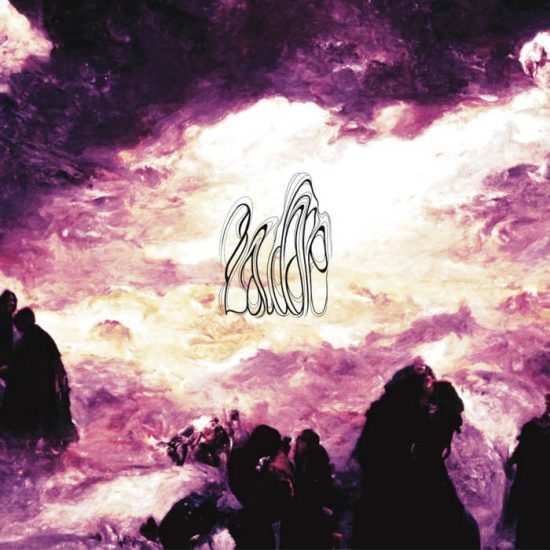 The lyrics of “Her Enchanted Hair Was the First Gold” are indeed poetic, and you can read them at the very end of this feature. They tell of the narrator’s remembrance of an encounter with Lilith, who provided the seed of the tree that the narrator became — “as uncertain as wild”.

(A digression: The legends of Lilith are many, but one, which took root in certain rabinnic texts, describes her as the first woman created by God, who made her from the earth just as God made Adam. Viewing herself as Adam’s equal in creation, Lilith refused to be subservient to him, fled Eden, and defiantly refused to return despite the commands of angels. Of course, in the Hebrew legend she became a monster named for the night, and the mother of demons, while the divinity made her replacement from Adam’s rib. Ah yes, the patriarchy at work….)

There is also poetry in the music, and in Laudare‘s live performance at Jadeturm Studios captured in the video. The gloomy strings and crystalline vocal harmony that open the song are haunting and hypnotic. Later, rippling piano keys lead into prog-minded instrumental interplay, joined by singing that’s both dream-like and sky-high.

The interaction between the head-hooking drumwork, the nimble bass-and-guitar dances, the bright piano arpeggios, and the languid flowing strains of the cello remains a seductive experience throughout.

On the other hand, even before the 30-second mark, Laudare reveal the violent side of their poetry, exploding in a burst of hammering drums, frantic bowing, darting guitars, and acidic howls. Cello melodies surface that give the music a distraught feeling, and the slashing of the guitar and cello, coupled with the scalding blackened vocals and percussive pummeling, heighten the moods of torment and turmoil.

And so, the song forms and transforms, twisting the mood from glimpses of hope to bitter anguish and haunting resignation.

“Her Enchanted Hair Was the First Gold” is one of two new songs that Laudare recorded live at Jadeturm Studios in Leipzig last September, and thankfully both of them have just been digitally released as a “name your price” download at Bandcamp (see below). The performance of the second song, “Systrophe“, was also captured on film, and I’ve included that one too. The lyrics are equally compelling, and you can find them beneath the stream at YouTube.

As for the music, it’s also a multi-faceted experience, one that begins in a rush of fierce energy and suddenly shifts into a slow, sad folk song that features a somber vocal duet by bassist Luise and guitarist/pianist Daniel, accompanied by drummer Olli‘s sedate rhythms and cellist/vocalist Almut‘s instrumental lament — and then things get much heavier and more harrowing, as the bass creates an undulating subterranean presence, the drums batter and blast, the tremolo’d guitar chords build a fever, and Luise‘s harsh vocals scald the ears again.

And of course the music continues to change, and ends in something sultry and smoky, like something you might hear in a small, dimly lit jazz lounge.

Laudare‘s past works have generated a scramble of genre labels among writers (some of which really weren’t very accurate), and these songs will too, like some linguistic stew of prog-rock, atmospheric black metal, pagan/folk, jazz, and classical music. They could settle into any one of those genres and find fans there, but where’s the fun in that? Instead, Laudare have made adventurous, relentlessly mood-changing songs that keep listeners off-balance, but they do hold together remarkably well.

One last word before I leave you with relevant links and the lyrics to the song we’re “premiering” today: On Bandcamp you can also find Laudare‘s last release before these two songs, a 2020 EP named Have Heart, Waste Flesh, which I attempted to review here. I still whole-heartedly recommend it.

“HER ENCHANTED HAIR WAS THE FIRST GOLD” – LYRICS

Once Lilith came to speak to me:
“See, I’m your seed, you are my tree.

To heavens high your rage shall strive
Grow buds and brenches, shine and thrive!
You precious child, sweet sprout of mine
follow my call, my love divine!”

Her voice was gale, but oh so bright.
Her teeth flashed up in pearly white
A smile so frail,
and eyes so fierce
she smelled like bale,
like lust and tears.

So, what I was is petty now
What I’ll become, a seedy vow
I’m tearing down. It was, we were.
What’s left is artworks, marked by her.

And from the fragments of my deed
my self-sown stones sprout fragile feet
of anxious hope and blackest ink
still longing for a glimpse, a blink.
While piece by piece fall into place
they even grow, get strong, gain grace.

Lilith’s still here and I’m her child
I am as uncertain as wild.
She trapped me in and set me free.
I’m my own seed, I am a tree.