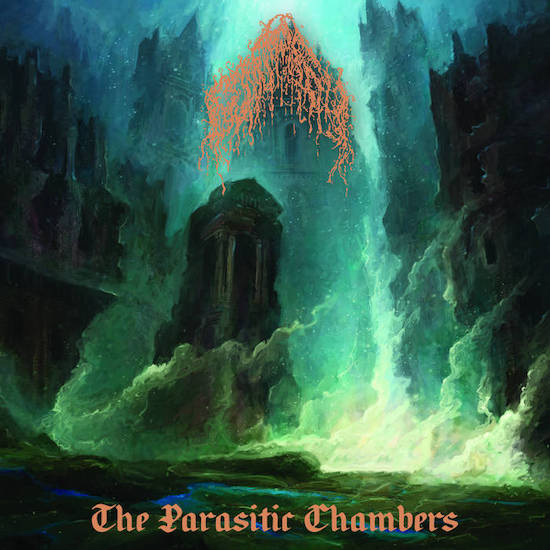 Once again, as you can see, Mark Erskine has made a stunning piece of cover art for the San Diego-based death metal band Conjureth. It’s only flaw is that it’s not violently shivering and splintering as you gaze upon it. Only in that way could it begin to manifest the sheer breathtaking madness of the music within.

As you can also see, the name of Conjureth‘s new album is The Parasitic Chambers, and it’s set for release on January 23rd by Memento Mori. Anyone who heard the band’s first album, 2021’s Majestic Dissolve, should be slobbering in eager anticipation of it, and trust us when we say to those rabid fans: You will not be disappointed.

If anything, this talented group, whose resumes include the likes of Encoffination, VoidCeremony, and Ghoulgotha, have created a record that’s even more head-spinning than what they’ve done before. Conjureth still pay homage to emergent forms of ferocious, thrash-propelled death metal from the late ’80s, but the new album is so fiendishly intricate and so technically jaw-dropping that it just makes a listener shake their head in wonder. 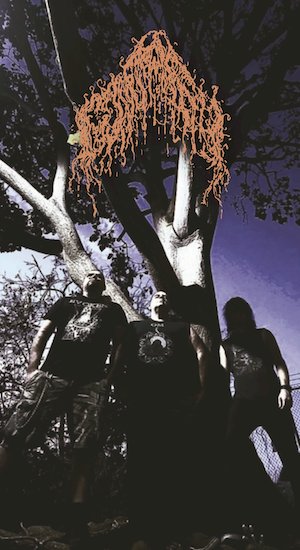 The song’s opening really is sheer madness, lashing together effusions of wildly roiling guitars with a diseased and demented tone, riotous drum machinations whose quick starts and stops make them even more discombobulating, a bass that bubbles like a vat of heated viscera, and fanatical teeth-bared roars. The music is simultaneously superheated and unhinged, but dazzling in its execution.

The berserk riffing and the madhouse permutations of the rhythm section swiftly change, without ever allowing a hint of sanity to emerge, but you can’t help but marvel at the technical flair of the performances, including the shred-tastic head-spinning lunacy of the soloing. Even though it doesn’t seem possible, the last half-minute of the song ignites an even more accelerated and extravagant display of head-exploding delirium than before — which is saying something.

And we have to bow down to the production strategy, because if your mind could work fast enough, you could hear everything that happens in this whipping centrifuge of sound, but with just enough filth in the gears so it doesn’t sound too clean.

For more info about the album release, check the links below — and also be sure to listen to the stream we’ve installed of the previously released single “Smothering Psalms“, which is just as bat-shit insane and violently electrifying as the song we’re premiering today.

One Response to “AN NCS PREMIERE: CONJURETH — “CREMATED DOMINION””